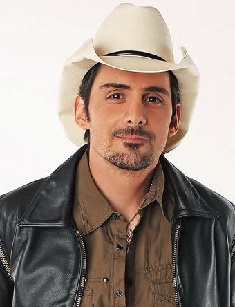 Brad Douglas Paisley, an American country music singer and songwriter is one of the most famous musicians worldwide. Starting with a debut album in 1999 “Who Needs Pictures,” he has released 11 studio albums which have been certified Gold or higher by the RIAA.

In his career, Paisley has sold more than 11 albums and has been nominated for the Grammy Awards near 10 times, 3 times he managed to win. He also won 14 Academy of Country Music Awards, 14 Country Music Association Awards, and 2 American Music Awards. The musician became the Grand Ole Opry member.

But was his way to such results smooth and without any problem? How did Paisley get the fame of a country music star? Let's know!

Brad Paisley was born on October 28, 1972, in Glen Dale, West Virginia, the USA. He was the only child in his family. Brad's father, Douglas Edward "Doug" Paisley, was working at the West Virginia Department of Transportation. His mother, Sandra Jean "Sandy" (née Jarvis) Paisley, was a school teacher.

According to future musician's admissions, his maternal grandfather Warren Jarvis gave him the love for country music. When Brad was 8, Warren taught him to play a guitar Sears Danelectro Silvertone. The first Brad's public performance he arranged when he studied in the 3rd grade: he sang in a local church.

Initially, his parents wanted him to play guitar. However, when they heard their son singing, they said: "forget the choir, let's just have Brad do the whole thing."

At the age of 13, the future music star wrote the first own lyrics «Born on Christmas Day» which he would later add to the “Brad Paisley Christmas.”

Being a teenager, he took guitar classes with local guitarist Clarence "Hank" Goddard. They got on well and formed a band "Brad Paisley and the C-Notes" together with Paisley's two friends.

When he studied at a High School, the principal heard him singing and invited him to perform at the local Rotary Club meeting. Among the guests, there was Tom Miller, the program director of a radio station in Wheeling, West Virginia. He was excited about Brad's pitch and suggested a young talented singer visit Jamboree USA. Brad agreed and, after the first performance, was invited to become a member of the show's weekly lineup. As a result, Brad dedicated the next eight years to work on the show. Interestingly, he was the youngest person inducted into the Jamboree USA Hall of Fame.

In 1991 Brad Paisley graduated from John Marshall High School in Glen Dale and entered the West Liberty State College. Later he got a fully paid ASCAP scholarship to study at Belmont University in Nashville, Tennessee. There he studied music business. In 1995 the musician got a degree in Business Administration.

He had an internship at ASCAP, Atlantic Records, and the Fitzgerald-Hartley management firm. Being a college student, he acquainted Frank Rogers who would become his producer in the future. There Paisley also met Kelley Lovelace and Chris DuBois whom he would write songs with.

Having graduated from Belmont University, Brad started building his career: he signed a contract with EMI Music Publishing. He wrote the song «Another You» for David Kersh, the song «Watching My Baby Not Come Back» for David Ball. Both songs became trendy hits.

Brad's debut performance as a singer was on February 1, 1999, when he released the album «Who Needs Pictures» on the label Arista Nashville. In May the musician sang it on the Grand Ole Opry. Seven months later Paisley released the song «He Didn't Have to Be» which became a No. 1 hit. The song tells about McCain Merren, Paisley's partner.

The album also included such tracks as «Me Neither» and «We Danced». By February 2001, the record was certified platinum.

On February 17, he started working on the Grand Ole Opry. He was a 28-year-old musician, the youngest person to work there. PBS arranged a special concert to celebrate the 75th anniversary where Paisley and Chely Wright performed with their song «Hard to Be a Husband, Hard to Be a Wife». Later the song was included in the Grand Ole Opry 75th Anniversary album, Vol.2. The concert became one of the most exciting events of the year.

In 2001, Brad helped Wright create the album "Never Love You Enough.": he wrote the songs «One Night in Las Vegas», «Horoscope», «Not as in Love». The musician also sang a back-vocal.

In 2002, his new song «I'm Gonna Miss Her (the Fishin' Song)» won the CMA Music Video of the Year. Many celebrities starred there: Little Jimmy Dickens, Kimberly Williams, Dan Patrick, and Jerry Springer.

His singles «I Wish You'D Stay», «Wrapped Around», «Two People Fell in Love» were included in the top 10. The album became very popular and stayed on the charts for more than 70 weeks. The musician toured the United States with the album.

In 2003 Brad Paisley released the third album “Mud on the Tires,” later “Who Needs Pictures” and “Part II.” The “Mud on the Tires” includes the hit song “Celebrities”. Its video clip became the subject for the parodies on the TV shows Fear Factor, American Idol, The Bachelorette, and According to Jim. The album's song «Mud on the Tires» peaked at No.1 on the Billboard in 2004.

In 2005 Paisley released the next hit album called «Time Well Wasted». It included 15 songs, several of them: «Alcohol», «When I Get Where I'm Going» (a duo with Dolly Parton), «She Is Everything», «Out in the Parking Lot» (a duo with Alan Jackson), «Cornography» (a comedy track). In 2006 the album got the Country Music Association CMA Award for Best Album.

Paisley arranged the concert tour which took place from the 26th of April, 2007 to the 24th of February, 2008. The musician visited 94 cities. The trip happened to be successful, the tickets were sold at once, and Brad decided to prolong it till the February 2008. Also, he invited the celebrities to perform at the concerts: Taylor Swift, Kellie Pickler, Jack Ingram, Rodney Atkins, and Chuck Wicks. He also invited former Browns Quarterback Brady Quinn to a show at the Blossom Music Center.

Due to the album, Brad got three nominations for the 2008 Grammy Awards, one of them - Best Country Collaboration (for the song «Oh Love» with Carrie Underwood). On 10 January, the musician received his first Grammy award for Best Country Instrumental.

On November 4, 2008, the musician released the sixth album called “Play.” Its song «Start A Band» (the duet with Keith Urban) became the 13th Paisley 's track to peak at No. 1 on the charts.

On January 26, 2009, Paisley announced his next tour called American Saturday Night. The 7th musician's album was called the same - «American Saturday Night». It was released on June 30, 2009. Brad released its single «Then» in March 2009 and performed this song for the first time on the America Idol, on March 18. It is Paisley's 14th No. 1 hit.

On May 6, 2009, the singer sang at the exclusive performance for the small group of his fans in Studio A of the Grand Ole Opry in Nashville.

On July 21, 2009, Paisley gave a performance at the White House for the then-president Barack Obama and his wife, Michelle Obama. It was broadcasted live on the White House website.

On 5 March 2010, at the singer's concert, the accident occurred: he fell off the stage. Immediately Brad left for a hospital, being afraid of a severe injury. However, the CT scan showed that there was no reason for worrying.

On November 2, 2010, Paisley released the “Hits Alive” - the collection of studio versions of his songs.

In 2011, Brad released the 8th studio album. It consisted of such singles as «This Is Country Music», «Old Alabama», «Remind Me».

In 2012 the singer released a new single called «Southern Comfort Zone». It peaked at No. 25 on the Hot Country Songs chart.

In 2014 Brad Paisley released the 10th album called “Moonshine in the Trunk.” Its songs «River Bank», «Perfect Storm» and «Crushin' It», «Country Nation» brought an enormous commercial and critical success.

Interestingly, Paisley does some charity work. So, in 2018, he and his wife Kimberly Williams-Paisley opened a free shop for people in difficult financial situations.

The musician has been working in the Drama Kings band for already 20 years – since 1999. Their first performance together was May 7, 1999.

Today the band consists of:

In 2000 Brad Paisley dated with Chely Wright, a country singer. They broke up and in 2001 Paisley met a new girlfriend – Kimberly Payne Williams-Paisley, an American actress, producer, and screenwriter. She is famous for playing the leading roles in the Father of the Bride, on the TV series The 10th Kingdom, According to Jim and Nashville.

In 2002 the woman took part in the music video for the song «I’m Gonna Miss Her (The Fishin' Song)». The couple engaged and married on March 15, 2003. They have two children – sons William Huckleberry (born on February 22, 2007) and Jasper Warren (born on April 17, 2009). The youngest son was named after Brad's grandfather. Today they live their own luxurious house in Franklin, Tennessee.

At present, Paisley has a net worth of of $95 million.

In his long career, Paisley has released 11 albums:

Except for songs, Paisley also writes books. He has published two books: