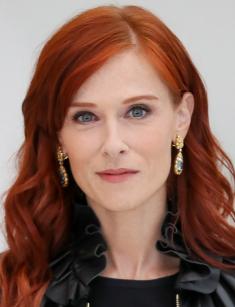 Audrey Fleurot is a French actress famous for her roles in the movie The Intouchables and the series Un Village Français (A French Village) and Kaamelott. Overall, she has participated in dozens of French TV projects and theater performances.

Audrey Fleurot was born on July 6, 1977, in Mantes-la-Jolie, Northern France. There is little information about her parents; the father worked as a firefighter. In 1995-1997, the young woman attended Pantheon-Sorbonne University; further on, she studied at Ensatt National School Of Arts And Techniques Du Théatre for three years.

In 2000, when Audrey received her education, she began to participate in plays and appeared on television as well; one could see her in an episode of the popular sitcom Une Seconde sur Deux. In the TV drama Froid Comme L'été, the beginning artist got the role of Marine.

Thanks to the series Kaamelott, movie makers noticed the actress’s talent. She personified Lady of the Lake for six seasons. Besides, the detective series Spiral about French legal system workers contributed to Audrey’s career development. She started working on in 2005 and played Joséphine Karlsson.

The actress tried herself on the big screen with small roles in the comedies: Two Worlds (2007) and The Women on the 6th Floor (2010). In 2011, Fleurot was invited to Woody Allen’s Midnight in Paris. The first day of work was marked with an accident: the woman wanted to greet the director and shake hands with him; Allen, who was known for having many phobias, started back. Whether it was a coincidence or not, the number of scenes with Audrey decreased.

Even though Fleurot’s role was episodic, the famous director’s project was beneficial for the actress’s filmography. The biographical tragicomedy The Intouchables proved to be another significant project. Audrey played the assistant of the main character, the noble man Philippe.

The Intouchables turned out to be the most popular movie in France in 2011 and the top-grossing foreign project ($426.5 million). It was nominated for the Golden Globe, César, BAFTA, and European Film Awards. François Cluzet, Omar Sy, and Clotilde Mollet starred in the movie as well.

Later on, the artist worked on the romantic comedy Delicacy based on the novel by David Foenkinos; Audrey Tautou and François Damiens gained the lead roles; Fleurot personified a secretary Ingrid. Delicacy was nominated for César Awards for Best Adaptation and Best First Feature Film.

This, 2011 was unique for Audrey Fleurot: her work in the successful movies opened the road to other popular projects.

Since 2012, Audrey has been a frequent participant of TV programs and shows; the historical series Un Village Français is one of the brightest among them. She also appeared in F.B.I. Frog Butthead Investigators (2012) as the US President and La Vraie vie des Prof (2013) as a strict teacher who hides a funny secret. The same year, the artist got the role of Jessica in the movie Queens of the Ring. It is the story about four women who work as cashiers and decide to become boxers.

In 2014, the tragicomedy Les Gazelles came out; as the story runs, the women past 30 are looking for the meaning of their lives. Fleurot got one of the leading roles. The melodrama about jealousy Belle Comme la Femme d'un Autre and the comedy French Women encouraging to love oneself at any age followed. The latter project starred Isabelle Adjani, Vanessa Paradis, and Laetitia Casta.

2015 did not give many projects: the actress had a cameo role in the series Call My Agent! Monica Bellucci, Juliette Binoche, and Isabelle Huppert participated there, too.

The next year, Audrey worked on the fantasy The Canterville Ghost and the comedy L'idéal, the sequel of the movie 99 Francs. In 2018, Fleurot was invited to the British series Safe by Netflix. It is the detective drama about a surgeon, Tom, whose wife died; his daughter is missing. The company released eight episodes in May 2018; the second season will appear in 2019.

Audrey Fleurot dates the actor, director, and scriptwriter Djibril Glissant whom she met at the beginning of 2014 at Latin dance classes. The couple went out together in the French Open for the first time. In November 2015, their son Lou was born. Fleurot successfully combines her personal life and work: the family actively supports her.

Fleurot is left-handed and short-sighted. She wears contact lenses but often works without them: a blurred picture helps her act more dramatically and feel engaged in a scene.

In 2019, several projects, such as Divorce Club and Le Bazar de la Charité, will be released.

The actress is not an active user of social networks; she rarely posts photos on her Instagram page.