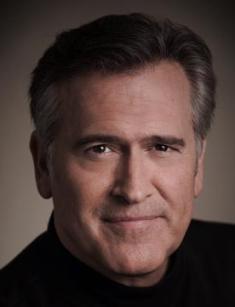 Some actors are memorable for only one role. For example, Robert Englund was remembered to the movie lovers for his bloodthirsty role of the maniac Freddie Cruger.

That is what has happened to Bruce Campbell: the audience remembers him as Ash Williams in the Evil Dead trilogy, despite the fact that the actor has portrayed more than 50 characters. Ash Williams is just as iconic as Jason Voorhees: one can see him in comics, video games, and action figures stores.

The future actor was born on June 22, 1958, in Royal Oak, Michigan. The boy and his brother grew up in an artistic family. As a school student, Bruce participated in theater performances and classic plays.

Campbell met his best friend, Sam Raimi, as a student. Sam dreamed of becoming a famous director and worked on short movies. Eventually, an artistic duet came to being. Sam presented diverse projects, from scary horrors to superhero sagas about Spider-Man, and Bruce appeared there, as a main or minor character.

In 1977, Raimi presented his debut movie It’s Murder! that was similar to Agatha Christie’s And Then There Were None: the main character had to find out who the murderer was. The director invited his friend to participate. It was less like a neo-noir detective and more like a comedy-flavored movie. Scott Spiegel, Robert Tapert, Ted Raimi, and Mike Ditz appeared in the project.

The next year, Bruce played in the short horror Within the Woods. It had a bombshell effect on cinematography; many successor projects followed, and the plot with a faraway hut in a forest became classic.

In 1981, adrenaline lovers enjoyed the iconic movie The Evil Dead where Bruce Campbell personified legendary Ash Williams. Five young people go to a forest hut to have fun. Ash and Scott (Hal Delrich) discover the book Naturan Demanto in the basement; it is quite similar to Howard Lovecraft’s Necronomicon.

The main characters accidentally read a passage from the book and wake demons that possess people and make them dead and insane. To fight against the malicious creatures, Ash Williams takes a chainsaw; the bloody battle between good and evil begins.

Bruce Campbell risked his life at the movie set: he fired a rifle, fell on the floor, and held his breath underwater. The King of Horror, the writer Stephen King himself, appreciated the artist’s work.

In 1985, the actor personified Renaldo ‘The Heel’ in Crimewave; the project was notable for the mixture of genres and reminded of Quentin Tarantino’s and the Cohen brothers’ styles. Soon, the movie Evil Dead II (1987) and the action Maniac Cop (1988) followed.

In 1990, Bruce had a short appearance in the superhero thriller Darkman. In 1992, he came back to Ash Williams in the comedy Army of Darkness: Ash was not a frightening fighter, but a time-traveler with a good sense of humor.

The next year, the artist gained the lead role in the series The Adventures of Brisco County, Jr. set in the Wild West. In 1996-1999, Campbell personified the Ancient Greek robber Autolycus in the fantastic TV series Xena: Warrior Princess starring Lucy Lawless, Renee O'Connor, Ted Raimi, and Kevin Smith.

It is peculiar that Sam Raimi tried to involve his friend in any project and gave him at least minor roles. For instance, Bruce played a presenter of ultimate fighting in Spider Man (2002) and a theater administrator in the second part. In Spider-Man 3, Campbell personified a French restaurant headwaiter.

In 2015, the artist played Ronald Reagan in two episodes of the black comedy series Fargo based on the Cohen brothers’ movie under the same title. Steve Buscemi, William H. Macy, and Frances McDormand starred there.

Further on, Bruce played famous Ash Williams in the series Ash vs. Evil Dead. The aged character lives an ordinary life, has a good time with women, and hangs out in bars. One day, he takes a girl to his house; he can do anything to win her attention. Ash drinks, smokes marihuana, and then reads Necronomicon aloud to impress his date. Absurd as it may seem, but the unspoken evil that has been absent for the last 30 years wakes up. Ray Santiago, Dana DeLorenzo, Jill Marie Jones, Michelle Hurd, and Lee Majors starred in the series.

Little is known about the charming actor’s personal life. In 1983, he married Christine Deveau. Two kids were born in this union: Rebecca and Andy. Six years later, the couple divorced.

In 1992, Campbell met the new love, the costume designer Ida Gearon, at the movie state of Mindwarp. Today, they live in Jacksonville, Oregon. Campbell shares the latest news about his life on Twitter and Facebook; he has no verified Instagram page.

To fans’ pleasure, the actor continues to participate in various projects. In 2017, Campbell played the main character in Highly Functional with James Frecheville and George Bailey. The movie Dark Ascension and the animated series Rapunzel's Tangled Adventure are the man’s recent parts.