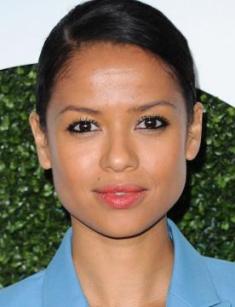 It never fails to amaze film critics that such a talented and attractive actress, Gugu Mbatha-Raw, has reached success for so long. The girl of African descent became famous only in 2013, although from early childhood, she surprised others with her innate acting skills. But today, Gugu can be called a real Hollywood diva.

Mbatha-Raw was born in the summer of 1983 in an interracial family. Gugu’s mother is of English ancestry, and her father’s homeland is South Africa. The parents were hurled together by work because nurse Anne Raw and doctor Patrick Mbatha met in a hospital in Oxford. Having grown up, the girl combined their surnames and shortened the first name. The father named her Gugulethu, which meant “our treasure” in African.

The parents did not live together for long; they divorced and separated a year after the birth of their daughter. The mother and Gugu settled in the town of Witney near Oxfordshire, where the future actress graduated from high school. The girl has maintained a warm relationship with her father; she still cultivates close links with the man.

Since childhood, Mbatha-Raw participated in amateur performances, learned to play the saxophone. At the age of 11, she appeared in the pantomimes of Oxford Playhouse as a member of the local group Dramascope. The Youth Musical Theater also warmly welcomed the girl because she revealed her singing talent.

After graduating from school, Gugu decided to continue her acting career. Moreover, in 2001, thanks to her numerous talents, she managed to get a scholarship at the Royal Academy of Dramatic Arts, and the aspiring actress went to conquer London. There, her stage career included a lot of productions in theaters.

The girl’s credentials have the characters of Juliet and Cleopatra in imperishable Shakespearean tragedies. Critics enthusiastically praised the acting of young Gugu, so soon, Gugulethu already played the role of Ophelia on Broadway. Jude Law was the girl’s partner in this production, which became a hit in 2009.

The actress started a film career, playing in TV series. Gugu Mbatha-Raw made her debut in the TV show Holby City in 2005. Then it was followed by several TV series in which the girl got small roles. She reached success, playing in the movie Undercovers, which won the hearts of viewers of the NBC channel. Some of the projects with her participation failed.

Since 2009, the actress has been showered with offers to play in deferent projects. On the set, the actress met Will Smith, Tom Hanks, James Norton, and other movie stars.

She landed the first leading role, which also made Gugu famous and attracted an army of fans in the film Belle (2013), directed by Amma Asante. For this work, the woman was nominated for the British Independent Film Award twice. The historical biographical drama about the mulatto brings up the issues of racism and the slave trade.

Mbatha-Raw showed the fate of the novice singer in the film Beyond the Lights brilliantly, and she was also praised by critics. The movie tells about the other side of beautiful acting life. Alongside Matthew McConaughey, the girl played a leading role in Free State of Jones, which focused on the events during the American Civil War.

Gugu rode a wave of popularity after playing in an episode of the science fiction series Black Mirror. The actress portrayed bisexual Kelly, who became the lover of Mackenzie Davis’s heroine. Viewers considered this episode to be the most interesting in the season. The review, published in The Guardian, even accused the directors that they did not involve Mbatha-Raw in the filming more often.

In 2017, Gugu’s filmography included the film adaptation of a touching legend about a beauty and a monster. In Beauty and the Beast, the actress played maid Plumette. In general, that year was fruitful and stressful for the actress. She starred in three movies, which premiered in 2018. These are The Cloverfield Paradox, Irreplaceable You, and A Wrinkle in Time.

The personal life of the beautiful English actress is a closed book. Gugu is trying to hide relations with men. The latest love affair ended in 2013. The woman dated and was even engaged to Harry Lloyd, known for the TV series Doctor Who, Manhattan, Game of Thrones.

Since then, journalists have not found out any information about a boyfriend of the bright mulatto. The press wonders whether Gugu devotes all her time to career development, or learned to hide her private life masterfully.

There is no single clue on social media either. Mbatha-Raw’s Instagram page does not have many photos.

At the beginning of 2018, the actress played in the new movie Motherless Brooklyn, directed by Edward Norton, and it took the creators seven years to prepare it. The shooting of the thriller takes place in New York City. Gugu joined the cast, alongside her colleagues Dallas Roberts, Bruce Willis, Willem Dafoe, Alec Baldwin.