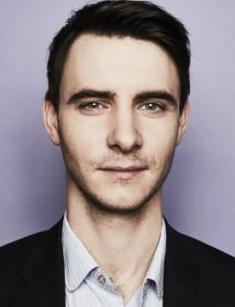 The broad audience knows Harry Lloyd for the role of ambitious and simple-minded Viserys Targaryen in the series Game of Thrones. However, like many British actors, the man does not limit himself with television: he has participated in theater performances and significant full-length dramas.

Harry Charles Salusbury Lloyd was born on November 1983 in London. His family is closely connected with literature: his father, Jonathan Lloyd, is a literary agency administrator, and the mother, Marion Evelyn, is the great-great-granddaughter of Charles Dickens, the classic English writer famous all over the globe. Lloyd has a brother Tom who works as a teacher of English in Paris and a sister Poppy, a Heart FM producer.

Harry is a big fan of his ancestor’s books. The boy was fascinated by the fact that Dickens uttered his characters’ words in front of a mirror. Later, when Lloyd became an actor, he realized how effective it was: dialogues seemed natural, and every figure had its peculiar manner.

As a teenager, the future artist attended Elton College and continued his education at Christ Church, Oxford.

The young man debuted as an actor at the college: he played many female characters in Shakespeare’s plays. At the same period, Harry appeared on the TV screen for the first time: he personified young James Steerforth in the screen adaptation of David Copperfield by Charles Dickens. Future Harry Potter Daniel Radcliffe collaborated with the actor in this mini-series.

Three years later, the actor had another TV project: the third screen adaptation of the novel Goodbye, Mr. Chips; he was given the role of young Rivers. The success of the 1939 predecessor movie was not repeated, yet this project can boast a high rating on IMDb.

As a student, Lloyd joined the Oxford University Dramatic Society and continued to develop his acting skills. He took part in several plays including Kiss of the Spider Woman. Besides, the young man came back to the classics: in 2005, he personified Antipholus in Shakespeare’s The Comedy of Errors and collaborated with Felicity Jones, the would-be Oscar and Golden Globe nominee. The artists met again later at the movie set of The Theory of Everything.

2006 brought a significant work: the drama series Robin Hood. The actor received the role of Will Scarlett, Robin’s band member. The next year, Lloyd had the chance to contribute to the iconic British project: the series Doctor Who; David Tennant and Freema Agyeman played the Tenth Doctor and his companion. Harry had a double rile in the eighth and ninth episodes of the third season: a haughty school student Jeremy Baines and an alien who took possession of his body.

Rumors had it the actor was going to be the next Doctor, but it never happened; Matt Smith played him.

The invitation to the iconic series Game of Thrones based on George R. R. Martin’s A Song of Ice and Fire became the breakthrough. Lloyd personified “the beggar king” Viserys Targaryen, the elder brother of Daenerys (Emilia Clarke). The actor participated in five episodes of the first season and brilliantly personified the proud and dim-witted young man who could sell his own sister to barbarians to get back the throne.

Viserys was one of the most notable evil figures of the series; by that moment, the audience did not know much about Joffrey Baratheon. The death during the “coronation” stuck in people’s heads as a terrible execution. Harry said about his character:

“He believes in his own inherent right, and that often makes him kind of quite spoiled, so he will lash out, and that’s kind of the only way [he] knows how to respond”.

Later, Lloyd appeared in several high-budget British series: one could see him in Wolf Hall about Great Britain during Cromwell’s leadership and Shakespeare’s screen adaptation The Hollow Crown: Henry IV, Part 1. The latter project was notable not only for the cast full of stars and impressive scenes but also classic texts and the English language of that period.

2016 brought the premiere of Anthropoid based on the story of the military operation during the Second World War; it was aimed at Reinhard Heydrich’s liquidation. Harry played Adolf Opálka, the Czechoslovak antifascist soldier who shot himself when he lost the unequal battle with the Nazi so that he would not be captured.

Harry is not a public person and does his best to keep his personal life secret from journalists. The actor is registered only on Twitter; he has no official Instagram page so far.

In 2006, Lloyd met the actress Gugu Mbatha-Raw at the movie set of the medical drama series Vital Signs; the couple was even engaged and appeared on the red carpet several times. In 2012, the lovers broke up; they did not give any comments. Whether Harry is dating someone now is unknown.

In 2017, the fantastic series Counterpart was released. It shows the secret UN department that maintains the diplomatic relationship with the Earth from the parallel universe. The artist plays one of the main characters, career-oriented Peter Quayle, who is involved in the two-dimensional spy games. The second season of the drama came out in December 2018.