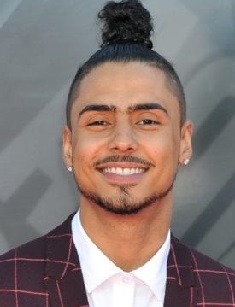 Quincy Taylor Brown is a popular American actor, singer and a songwriter mostly known as Quincy. He starred in the 2015 film Brotherly Love, and released a music single "Friends First". More recently, he is a regular on the television musical drama Star. Have you always been interested in his way to success? Then, it is high time for us to introduce his biography to you!

Quincy’s birthplace is New-York. He was born on June 4, 1991, to the family of late model Kimberly Porter and singer Albert Joseph Brown III (Al B. Sure!). He got his name in honor of his godfather, music and entertainment icon Quincy Jones. At an early age, Brown went through his parents’ break-up. When Quincy was 3, his mother Kimberly found a new man - Sean "Diddy" Combs. They started dating, and he eventually adopted Quincy and raised him as his own song.

Besides Brown, in the family there were 3 more children: a son, Christian, and twin daughters D'Lila and Jessie. Quincy Brown celebrated his 16th birthday in a big way. His parents arranged him a luxurious party in Atlanta. The event was even featured on MTV’s My Super Sweet 16.

Brown can be seen posing in several photos for his birthday celebration on December 17, 2007. Unfortunately, Brown’s biological father, Al B. Sure! didn’t attend his lavish birthday bash.

He often changed places of living with parents. The future star passed his youth mostly in Georgia. Later he settled down in Los-Angeles, California in his final years of high school and completed his education at Calabasas High School.

As a kid, Brown had aspirations to play professional baseball. However, he wasn’t able to play on a high school team due to his family always having to move.

In June 2015, Quincy published his debut music video for singer and actress Elle Winter's lyrics. In 2016 Quincy announced signed a record deal with Bad Boy/Epic Records. The next year Brown released his first musical project. It was an EP.

In 2018, Quincy Brown starred alongside Kat Graham as Josh in a Netflix original film The Holiday Calendar.

Brown is mostly known for such songs as «Snuggle Up», «Exotic» (Break Down), and «Coming Off Strong».

Brown takes his chosen professions seriously. As an actor, he’s studied with famed acting coaches Aaron Speiser (Will Smith, the Wayans brothers) and Richard Lawson (Michael Peña, Giovanni Ribisi), and has taken classes at Playhouse West and the Groundlings. In January, the film Dope, in which he plays a wealthy Los Angeles teenager with unintentionally hilarious “Straight Outta Compton” pretensions, received a Special Jury Award at the Sundance Film Festival. In April, he had his first central role in the teen drama Brotherly Love.

However, once he mentioned that music came first for him just because it was so next-door. Due to his dad, he was always in the studio.

Interestingly, Brown himself supposes him to be more of a singer than of an actor. He has got vocal coaching. According to him, he has always known he had some type of singing ability, but just didn’t know how to use his voice.

When the journalists asked him, «When did you begin rapping?». He answered he thought the rapping had come from being around friends in school, beating on the desks with pencils and making beats and freestyling about the teacher. And it had been jokes, jokes, jokes, until he was freestyling in such a good way that it became serious. He applied that to just him BS’ing in his room, listening to his beats and songs, and he was able to become a writer off of his freestyling.

The Rock, Dwayne Johnson is Quincy’s idol. Moreover, he is his favorite person in the word. Brown was a wrestling fanatic, and when The Rock moved on to acting, that was a huge thing for him. Even now, Brown still wants to be like him. It wasn’t even about wrestling; it was about Johnson as a person. Quincy Brown has met The Rock very briefly a couple of times. Each time was just crazy. He has never got a picture because they were around such professional settings—according to him, Brown was like,

But he wanted one. Brown was recording himself, and kind of got The Rock in the background at the Grammys, 2011. He got a clip of Johnson, so he’ll be in his documentary.

He has also founded the production company called FourXample. He has started a business of watches, and his watch line is called as ‘Chalk by Quincy.’ He also has jeans collection in which he has tied with Embellish. Besides, he owns a start-up technology company. Quincy has launched his ‘Shortcut’ app by which one can get a fast and on-demand barber service. This service provides on-demand grooming services. The users can request and receive a haircut anytime, anywhere.

They can ask for the service at home, at the office, or in your hotel room. The mission of this service is to make haircuts readily available to anyone, and it empowers the barbers to control their businesses. It serves as a digital marketplace for the barbers besides their brick and mortar shop.

Brown’s net worth is evaluated at $16 million. His father, Sean is among the Forbes’ millionaire’s list with a net worth of $825 million.

Usually when a male and female actor work together, either they turn out to be good friends or eventually fall in love with each other and come out as a couple. The similar case got identified with Quincy Brown who surfaced in the gossip story for his romantic involvement with actress Keke Palmer. They probably dated each other from 2015 to 2017.

They worked together for the movie Brotherly Love (2015). Keke and Quincy acted an on-screen relationship where the character Chris (Quincy) was head over heels in love with Jackie (Keke).

The rumors about their affair appeared on April 1, 2015, when Brown gifted a puppy «Nala» and posted its picture captioning it as a surprise to «His Baby.» While at the same time, Keke responds to Brown, expressing her gratitude for the cute little puppy.

In spite, they have posted several pair picture, neither Keke nor Brown has spoken anything about their relationship.

When the couple split up, Brown was thought to have been in a relationship with Kourtney Kardashian. The Keeping Up With The Kardashians star was spotted going on a dinner date West Hollywood with him.

Before Keke, the actor’s past girlfriend was Amber Rose.

In 2018 Brown made a new haircut with braids. According to a majority of fans, the hair suited him perfectly.

On November 15, 2018, Quincy’s mother Kim Porter was found dead in Toluca Lake, Los Angeles, California, United States, days after the family celebrated the twin girls’ birthday. The former model was 47 years old. The cause of her death has not been revealed and is still a mystery.

Brown’s mother’s funeral took place at Cascade Hills Chruch in Columbus, Georgia. His mom’s death affected Brown seriously – he felt really heartbroken and was not able to appear in public.