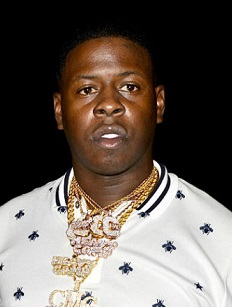 Blac Youngsta (real name is Samuel Marquez Benson) is an American rapper performing with Yo Gotti's Collective Music Group (CMG) and its aegis, Epic Records. Generally, he became a rap idol and got many fans after releasing his top songs «Hip Hopper», «Pull Up», «Lay Down», «Run Down», «Come Thru» and «Booty.» In his career, Youngsta has collaborated with many outstanding rap representatives, such as Lil Baby, Chris Brown and Lil Pump. Some even say he is even better than Beyoncé.

Youngsta's birthplace is McMillan Street, a poor area in the south side of Memphis, Tennessee – he was born there on April 8, 1990. He has several siblings – as babies, they were brought up by their grandparents. They worked several jobs to earn a living, but mostly the family had to starve. Before fame, at the age of 7, Blac Youngsta got his first job – he was hired as a shop assistant at a local grocery store. Unfortunately, he was fired when the manager caught him placing fake orders to the store in order to steal the food home for him and his brothers.

Having lost the job, Benson became involved in drug and gun traffic. He was arrested many times and spent some time in prison. In 2012 Youngsta began arranging local block parties and became very popular in his district due to it. Later, he started working on rap lyrics. That year was marked by Youngsta's debut music project «Fast Bricks.»

In 2012 Benson firstly took his nickname Blac Youngsta. That time he released the first three installments in his series from 2012–2014. In 2015 he pleased his fans by publishing a song «Heavy.» The track grabbed Yo Gotti's attention. He remixed the single and offered Youngsta to sign a contract with Collective Music Group label. The singer's first work recorded on a label was «I Swear To God», released on September 24, 2015. The next year, the musician published mixtape «Young & Reckless.» In September 2016, the other his mixtape «Fuck Everybody» was published. Young Thug, Quavo, Jacquees и YFN Lucci took part in its recording.

In February 2017, Youngsta added «Illuminati» to the list of his music projects. The mixtapes included guest appearances from Kodak Black, Lil Yachty and Slim Jxmmi.

That year Youngsta was messed up with a criminal scandal – he was arrested and accused of taking part in a shooting targeted towards Yo Gotti's enemy Young Dolph. As a reaction, his fans started a «Free Blac Youngsta» movement. Besides, a popular rap musician Young Thug published the song of the same name. Having left a jail, Blac Youngsta established his own imprint under CMG, Heavy Camp. In June the rapper released a mixtape titled «I'm Innocent» - Slim Jxmmi and Ty Dolla Sign helped in its recording. In December 2017 Youngsta was signed to Epic Records.

At the beginning of 2018, the musician's debut studio album «2.23» through Epic was released. It included guest appearances of Lil Yachty, Travis Scott and French Montana. The collection got to the No. 42 on the Billboard 200. The album's single «Booty» finished 73rd on the Billboard Hot 100. Also, the track was certified Gold by the Recording Industry Association of America (RIAA).

Blac Youngsta released a sequel to his 2016 mixtape «Fuck Everybody» with «Fuck Everybody 2.» It featured a sole guest appearance from Lil Pump, which peaked at #63 on the Billboard 200.

In May 2019, Blac Youngsta released his EP called «Cut Up.» In his career, the musician has arranged several tours I'm Innocent Tour (2017) Young & Reckless Tour (2016), I Swear to God Tour (2015). He has given concerts at Walmart, at Bliss, at Gas Station Arena and many others.

Youngsta’s net worth is evaluated at $2 million. Like every rapper, Blac Youngsta loves showing off his money in his Social Networks.

On January 8, 2016, Youngsta withdrew $200,000 from his checking account at a Wells Fargo bank in Atlanta on Peachtree Road. He intended to buy a car and said he didn't believe in checks.

Youngsta said that after he withdrew the cash, a police offer pointed in his direction. Then he was rushed by the police, and they pointed guns to his head. Witnesses said several other people, part of his entourage, jumped out of an SUV when the police arrived, and they were handcuffed too.

It gets a little confusing at this point as to exactly why the police suspected him. Police said someone had written a fraudulent check at the bank earlier and he was confused with that person. While he was detained, the police took $100,000 of his $200,000, but eventually returned it after realizing he was legitimate and had $1.3 million in his account.

In 2017 Blac Youngsta turned himself into police on May 16, three months after a shooting that involved rapper Young Dolph.

Blac Youngsta was accused of connection with the shooting, which took place in late February. He was taken into custody on weapons charges that were directly related to that shooting.

Speaking about the crime, nearly 100 shots were fired along the 600 blocks of North Caldwell Street around 6:30 p.m., about 30 minutes before the men's championship game of the CIAA. There were no injuries reported.

It was previously reported that Dolph had spent hundreds of thousands of dollars on metal that would make his SUV bulletproof.

The rapper has said that the more money he made, the more threats he received. The money that he spent to bulletproof his SUV could have saved his life and the lives of other people in the vehicle at the time of the shooting.

Dolph was taken to a Los Angeles area hospital with «multiple gunshot wounds.» Later the musician claimed that his injuries were not life-threatening.

As of Youngsta's personal life, he prefers to keep it in secret. Probably, the rapper is married. However, there is no precise information.