Noomi Rapace, whose maiden name is Hilda Noomi Norén is a Swedish actress who has played the leading roles in the following movies - "The Girl with the Dragon Tattoo," "Sherlock Holmes: A Game of Shadows," "Prometheus."

Noomi was born on the 28th of December, 1979 in Sweden city of Hudiksvall which is in the north of Stockholm. The girl’s family belonged to artistic circles: her mother, a Swedish actress Nina Norén, worked in the theater and acted in the series. Her father Rogelio Durán arrived from Spain and had a music career. In 1981 Noomi’s mother got acquainted with the businessman from Iceland - Hrabnkel Carlson who was breeding horses and later left her husband.

When the girl turned five, she moved to Island to the village of Flúðir together with her mother and her stepfather. Two years later Noomi had her debut in the cinema in the small role in the historical movie "In the Shadow of the Raven" of Swedish-Icelandic production. Participation in the shootings impressed Noomi, and she made up her mind to become an actress in the future.

In 1988 her family returned to Sweden where Noomi began to attend Steiner alternative school. Educational process at school was individual following child's mentality. At teenage age, Noomi left her studies and got a fancy for alternative music. The girl dyed her hair blonde, made a piercing, got involved with the company in which young people were drinking alcohol and using drugs.

At the age of 15 years, Noomi went to Stockholm where she entered Theatre school. During her studies in the capital, the girl became aware of the fact that she had huge gaps in her knowledge. Noomi gave up her bad habits and was engaged in self-education.

At the age of 17, the beginning actress performed as Lucinda Gonzales in the Swedish series "Three Crowns." In 1997 Noomi was invited to take part in the drama about the competition of the teenagers under the title "Truth or Courage." This Swedish family drama won two prizes at Berlin Film Festival. At the beginning of 2000-s Noomi was working at the television, acting in the series ("Stora Teatern," "Love, Love, and Love Once Again," "Brothers by Blood"), and also participating in the plays of Stockholm State Theater and Royal Dramatic Theater.

In 2003 the Swedish director of Iranian origin Reza Bagher invited the girl to the leading cast of "Capricciosa" family drama. In 2005 Noomi appeared in "Brothers by Blood" crime detective. In these new movies, the girl already appeared under the pseudonym of Rapace what means "bird of prey" in the French language.

In 2007 the Danish director Simon Staho offered Noomi to play the significant role of Anna in the social drama "Daisy Diamond." This movie tells a story of the comedown of the girl who had made up her mind to become the actress. For this role, the actress got two national awards in Denmark - Bodil and Robert Awards prizes. The European critics began to talk about the creative career of Noomi Rapace.

In 2009 the actress enriched her filmography with the leading role in the Swedish blockbuster "The Girl with the Dragon Tattoo" directed by Niels Arden Oplev. The book "Millennium" written by Stieg Larsson became the basis of this book. Noomi played the character of Lisbeth Salander, the girl with extraordinary mental abilities, but with a psychological disorder.

To get into the character of this role, Rapace had been preparing for half a year. Besides, the girl who was 163 cm high with a weight of 57 kilos had to observe the diet to lose weight to be in the appropriate shape. After the first movie, there appeared two more episodes of the franchize – "The Girl Who Played with Fire" and "The Girl Who Kicked the Hornets' Nest." The Swedish actor Michael Nyqvist worked together with Rapace in this picture.

In 2010 the movie received the prize of the national Swedish Guldbagge Awards and the award of international BAFTA Awards. Noomi Rapace got the nomination for European Film Academy Awards, BAFTA and Saturn Awards. In 2010 "Millennium" project came out on the Swedish television. In this project, Noomi Rapace also received the leading role. The series brought to its creator prizes of the national Kristallen Awards and international Emmie Awards.

In 2011 after the success of the European colleagues the Hollywood cinematographers decided to repeat the screen version of the trilogy. The cult director David Fincher started to work on this projects and invited Daniel Craig and Rooney Mara to play the leading roles in this movie.

In 2011 Noomi together with her spouse Ola Rapace appeared in the social drama "Beyond" about complex relations in the family The picture got "International Critics' Week Award" at Venice Film Festival and the award of Nordic Council. In 2011 Swedish actress also took part in the shooting of horror movie under the title "Babycall."

The same year the director Guy Ritchie invited Noomi Rapace to the main cast of the detective movie "Sherlock Holmes: A Game of Shadows." In this movie, the Hollywood stars Robert Downey Jr., Jude Law, Jared Harris performed the main roles. A year later Sweden actress appeared in the prequel to the fantastic horror movie "Stranger" – "Prometheus." Except Noomi Rapace Ridley Scott had chosen such actors as Michael Fassbender, Charlize Theron, Guy Pearce for this cash project. In 2012 Noomi took part in the shootings of the erotic thriller "Passion" directed by Brian De Palma. In this picture, she appeared together with Rachel McAdams, Karoline Herfurth, and Paul Anderson.

In 2013 Niels Oplev suggested Noomi take part in his new picture – the thriller "Dead Man Down." The girl embodied the role of Beatrice. Colin Farrell became her partner on the shooting stage. A year later the crime fighter "The Drop" with Noomi Rapace and Tom Hardy came out on the screen. In 2015 the same actor's duet appeared in the movie "Child 44", telling the story of the Soviet maniac Chikatilo.

Still being a student of the Theatre school, Noomi got married to Swedish actor Pär Ola Norell who soon took a pseudonym of Rapace together with his souse. In 2003 Noomi gave birth to their son Lev called in honor of the Soviet football player Lev Yashin. As they entered the tenth year of their joint life, Noomi and Ola decided to divorce.

Since 2011 the actress wholly devoted her private life to the acting career. The actress has her page on Instagram. Moreover, her admirers create public pages dedicated to creative work of their favorite actress where they post news, photos, and videos of Noomi Rapace.

In 2016 the picture "Unlocked" directed by Michael Apted came out. This movie tells about the arranged terrorist attack at London and about intelligence agencies which try prevent this attack. Noomi Rapace, Orlando Bloom, John Malkovich and Michael Douglas performed the main roles in this picture. The same year Swedish actress appeared in the science-fiction thriller "Transformation."

In 2017 there started the shootings of the sequel of the movie "Prometheus" - "Alien: Covenant" in which Noomi again turned into the brave heroine, Dr. Elizabeth Shaw. Now the actress is engaged in the work on the new project "Seven Sisters" in which she plays seven twins. The detective story will appear on the screens at the end of the year. Besides, Rapace participates in the movies "The Price," "Untitled Bosse & Anita," "Callas," "Alive Alone," "Brilliance," "Stockholm." 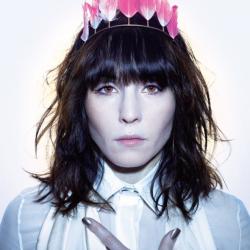