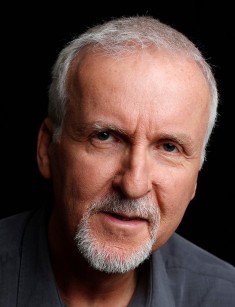 James Francis Cameron is a legendary movie director and a scriptwriter of the Canadian origin. His movies "The Terminator", "Titanic" and "Avatar" became the highest grossing pictures in the history of cinematography, having collected 5,5 billion dollars to the creators. Cameron received 23 most known film awards for his works.

James was born on the 16th of August, 1954 in the Canadian town of Kapuskasing located in the Province of Ontario. His father Phillip Cameron was an electrical engineer, and his mother Shirley Lowe worked as a nurse and also was engaged in the fine arts. James was the firstborn of his parents, later four more children were born in this family. The childhood of the future director passed in the town of Chippawa from where the boy went to the city of Niagara Falls to attend Stamford Collegiate School.

When Cameron turned 17 years, his family moved to the USA, to the Californian city of Brea where the young man got the secondary education. Then James enrolled at Fullerton College and specialized in the studying of Physics. Having studied one course only on this specialization, he switched to English literature which he also left in 1974.

The young man got a job of the truck driver, and in his free time, he tried to write scripts for the movies. In 1977 having seen the first part of the well-known blockbuster "Star Wars" at the movie theater, Cameron made up his mind that it was quite possible to unite art and science on the screen.

In 1978, together with his two school friends William Wisher and Jason Fessenden he had finished work on the script and had shot the short length fantastic movie "Xenogenesis" which became his portfolio and ticket of the young director to the "New World Pictures" film studio. At first, James worked as the assistant producer, in parallel continuing to study the technology of shootings and to develop his own methods, and then has decided to begin his independent work.

The horror film of 1981 "Piranha II: The Spawning" became his first full-length project in which James Cameron acted as a professional director. The movie itself wouldn't be remembered in the history of cinematography and creative biography of the director if not for one circumstance. During his work on this picture Cameron got sick with food poisoning and during feverish oblivion in his dreams, he saw an android who arrived from the future to kill Cameron.

This nightmare was embodied in the full script of "The Terminator" which was appreciated by many movie companies, but nobody wanted to risk, employing the beginning director, and Cameron wanted to shoot this picture on his own. As a result, the script was sold to the producer Gale Annе Hurd for the ridiculous sum of $1, but under the condition that James would become the director of the project. James Cameron was given quite a modest budget of 6 million dollars, therefore, the director refused to use expensive operator’s wagons and shot the movie, sitting in the wheelchair.

Also, James was inventive in some other moments. The automobile pursuits which impressed the audience so much had been shot at a usual speed without the participation of racing drivers, and then while cutting the movie these scenes were overtyped at an accelerated rate. For the final scene of death of the robot under the "press", there was a dummy which was made of foil which "eye" was a small red bulb, and the "press" was produced of the big pieces of styrofoam painted in steel color.

Nevertheless, the director managed to create the movie which is still considered to be the best example of the genre. The director finished his work on this picture in 1984. Young performers of the major characters of the film - Arnold Schwarzenegger and Linda Hamilton had got the status of the Hollywood stars.

During the break between the first and the second part of the previous movie James Cameron began to work on the sequel of the fantastic movie "Aliens" shot by Ridley Scott in 1979. The director invited the actress Sigourney Weaver who had already taken part in the first part of the movie to play the leading role in the horror movie "Aliens". The Canadian had successfully and skillfully continued the subject line of the original variant of the story, but at the same time, he had created a classical Hollywood action movie. At the same period of time, Cameron was writing a script for the international hit – the action movie "Rambo".

In 1989 the film director enriched his filmography with the fantastic thriller "The Abyss" which narrated the rescue of the sunken nuclear underwater ship and its collision with some unknown reasonable world at the sea depth. For the first time Cameron had come close to his dream – he had got to the bottom of the ocean. The film crew and cast of the movie had got training for work at the sea depth. Despite the grandiosity of the idea, the movie had failed in a hire but managed to pay back the budget.

James Cameron was suggested to shoot the second part of "The Terminator" at once. But Cameron didn't hurry, waiting when the special effects would reach such level that he would be able to realize his idea. Even during the shootings of the first picture the master got the idea to make the android of the liquid metal, though then it was impossible to recreate such an effect.

It’s curious to compare the budgets of two parts of "The Terminator": 6 million dollars were spent for the shootings of the first part, and the same money in the second part of "Terminator 2: Judgment Day" could only pay back the morphing of the new robot. And those shots which the viewer observes during three minutes, demanded eight months of work of the experts. The director refused to shoot the subsequent parts of "The Terminator", he explained that the new scripts were too commercial and heartless. For the similar reason, Cameron rejected offers of the project managers of "Spider-Man" and "Transformers".

In 1994 James Cameron again invited Arnold Schwarzenegger to play the leading role of Harry Tasker in the comedy action movie "True Lies". The seller of the computers and office equipment in practice appeared to be the secret agent of government service. The spouse of the main character Helen (Jamie Lee Curtis) and her husband had been taken hostages by the Arabs. During the escape from the captivity, the woman learned a lot of new things about Harry with whom she had been together for 15 years.

The next triumph expected the director in 1997 when James shot the dramatic catastrophe "Titanic". At that time the picture became the highest-budget as the expenses for the creation of this drama had reached $200 million. The shootings of "Titanic" cost 25% more expensive, than the construction of the real huge vessel in 1912.

James Cameron himself worried that the picture wouldn't draw the attention of the audience as it lasted for three hours and didn’t have a happy end. As a result "Titanic" was nominated for Academic Awards in 14 categories and received 11 figurines. The actors Leonardo DiCaprio and Kate Winslet instead of whom earlier had been considered Matthew McConaughey and Gwyneth Paltrow became famous overnight and woke up as Hollywood stars.

At the movie theaters, the picture had a box office of $2 billion, having set a world record which was broken only 13 years later, by another Cameron’s fantastic blockbuster "Avatar".

Before the next masterpiece, Cameron addressed the genre of series and at the beginning of the millennium shot two seasons of the detective action movie "Dark Angel" with Jessica Alba in the major role. The star turned into the heroine Max – the American girl who had undergone some genetic transformations which helped her to survive after the electromagnetic impulse arranged by the terrorists which destroyed the intelligence of the most part of the citizens.

In 2002 a new movie by the director – a popular scientific picture "Expedition: Bismarck" was released on the Discovery TV Channel. In this work, Cameron once again resorted to the subject of oceanic depths. Together with the well-trained film crew, the director goes to the depth of 4700 meters under the water to discover the linear leader "Bismarck" of the fascist Germany which had sunk during the World War II.

James wrote the script for the movie "Avatar" in 1994 and wanted to start to realize this project right after the triumph of the picture "Titanic". But as a result, the director decided to postpone this work as many of his ideas couldn't be realized due to the lack of technical capabilities. When the computer graphics had reached such level that the drawn characters looked not less realistic than the living actors with makeup, James returned to this project.

Especially for "Avatar" the new technology of the video shooting was developed. It allowed shooting at the same time in two projections: in a certain virtual environment and in real time. The movie about the fate of the people of Na' vi was extremely successful, and the director had got a desire to create new parts of the franchize.

In 2014 the shootings of one more project, significant for James Cameron, had come to the end. This was a science-fiction movie "Deepsea Challenge 3D" about the travel of the single submersible to the bottom of the Mariana Trench. Cameron was the only one in this underwater ship.

The immersion to the bottom of the deepest oceanic trench was a dream of the childhood of the director. Still being a little boy Cameron dreamed about the research activities. And only when he turned 6o, he managed to make his dreams come true fully. This movie strikes the audience with the high quality of 3D shots and also the exclusive photos made at the depth of 11 thousand meters. The picture was premiered on Discovery TV channel.

James Cameron was married 5 times. In 1978 the director got married to the waitress Sharon Williams. But the director gave much more attention to his career, than to his personal life therefore in 4 years the spouses divorced.

In 1985 James got married again. Gale Anne Hurd became the second wife of the producer. She was the one who had believed in Cameron's talent and entrusted him to shoot "The Terminator". Together the spouses had worked over several pictures, but after the end of their creative union, their marriage also had come to an end.

Since 1989 Cameron had been living with Kathryn Bigelow, the director of the movie "The Hurt Locker". Officially spouses divorced in 1993, but James had left Kathryn in 1991 because of the actress Linda Hamilton. In 1993 their daughter Josephine Archer was born, and in four years Cameron and Hamilton celebrated their wedding.

However, in 2 years young people broke up as the director got acquainted with the actress Suzy Amis who had played the role of the granddaughter of the main character in "Titanic". Lovers got married in 2000, in a year their daughter Claire was born, and in 5 years their twins Rose and Queen were born to them. Also, James brings up Jasper Robards, Suzy's son from her first marriage. Cameron and his four children are vegans.

Today James is engaged in work on the sequel of the picture "Avatar - 2" which premiere was set up for 2017, but for technical reasons, Cameron postponed its release till 2020. Also, the film director prepared three more scripts which he plans to turn into the subsequent parts of the franchize "Avatar".

There are more than 20 books in the asset of Cameron, which were based on the scripts of his movie projects. In 2009 James Cameron awarded his own star on the Walk of Fame in Hollywood. Together with his spouse Suzy the film director lives in the Californian city of Malibu, but he still hasn’t got the American citizenship for political reasons. 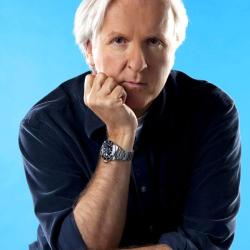