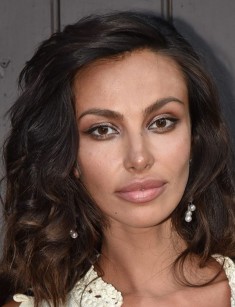 The Italian model Mădălina Diana Ghenea, who is Romanian by her origin is adored by the photographers, fashion designers and by men in general. This beautiful woman has incredibly long legs and a flawless figure. It is said about the girl that she has Sophia Loren's appearance, Angelina Jolie's look, and Anna Magnani's figure. It is difficult not to agree with this statement when you look at Mădălina Ghenea 's photos. Such experienced lady's men and judges of female beauty as Leonardo DiCaprio, Michael Fassbender, and Philipp Plein were captivated by the charming girl.

The future model was born in the south of Romania, in the ancient town of Slatina which was located on the river Olt. There is no information about Mădălina Ghenea’s family. Also, little is known about her school progress. It is unlikely, that Mădălina Diana was an excellent pupil, as she hadn’t got enough time for her studies. Hardly the girl had turned into the young lady, it became clear to everybody that she had grown up from the gawky teenager into the beautiful young woman with model parameters.

With a height of 1,80 cm Ghenea weighs 58 kg. But don't hurry to draw conclusions about the typical model: Mădălina Ghenea speaks four foreign languages and in her free time she likes reading. The not bad progress of the schoolgirl, but the fact that she appeared in the fashion magazines without clothes became the main claim of her teachers. Already at the age of 14, the young Romanian posed at the podiums and took part in the photoshoots.

Because of the busy working schedule, the model skipped the lessons, but the thing that became the last straw which exhausted all patience of her teachers was the photo shoot of the 16-year-old schoolgirl in the underwear. The senior pupil was expelled from the school, but she didn't leave her hobby: having transferred to another educational institution, she continued to perform at the podium and to take part in advertising. Having received the school-leaving certificate, Mădălina Ghenea went to Italy where her model career had quickly taken off.

Mădălina Ghenea appeared in the fashionable catalogs in advertising of "Lascana" underwear and swimsuits. Soon it became known that the model had signed the contract with this firm. But except for "Lascana", other well-known cooperation to the Romanian beautiful model: Ghenea appeared in the photoshoots of the clothes of the following brands - "Borghetti Liquor", "Gioelliamo", "Grimaldimare", "Lepel". Later she advertised "Lise Charmel" and "Piera Lingerie" underwear.

In 2008 Mădălina presented her ideal forms in the well-known "Peroni" calendar. Out of the podium, Mădălina Ghenea prefers convenient, but sexual outfits which don't hide seductive forms of the girl. Speaking about the forms, you shouldn't forget about the plastic surgeries which Mădălina Ghenea had got. If to compare the photos before and after the plastic surgery, then the bigger size of the breast and the changed form of model’s lips can be noticed.

Mădălina Ghenea looked remarkably even before the correction, but after the surgical procedures she became stunning, and the number of her admirers increased in many times. The plastic surgeons hadn't worsened the appearance of the girl and had highlighted her natural advantages.

The creative biography of Mădălina Ghenea is connected both with the podium and with cinematography. The actress appeared approximately in ten movies, but she hadn’t got the leading roles. For the first time, the Romanian-Italian model appeared on the screen in 2007: Mădălina acted in the song video of Eros Ramazzotti for the single "Time Between Us" ("Il tempo tra di noi"). Ramazzotti's admirers started talking about the long-legged girl with a yearning look, having suspected the famous bachelor of the love affair with the model.

After the release of this video the producers paid attention to the girl and offered her a role in the comedy directed by Enrico Lando "Ordinary Idiots". In 2011 Mădălina Ghenea participated in the Italian TV show "Dances with Stars" where the professional dancer Simone Di Pasquale became her partner. Next year the audience saw the model and the actress in the social drama "The Mongrel" directed by Alessandro Gassmann.

In 2013 Ghenea took part in the movie which brought her popularity. The premiere of the criminal melodrama "Dom Hemingway" with Jude Law and Richard Grant in the leading roles was held at Toronto Film Festival. Next year Mădălina Ghenea appeared in the third, final season of the French-German-Czech-Italian series of the American director and scriptwriter Tom Fontana. The subject line of the historical drama develops in the Renaissance times. The audience managed to see Mădălina in five episodes as the character of Dorotea Malatesta.

In May 2015 there was a premiere of the drama "Youth" of the Italian film director and scriptwriter Paolo Sorrentino in Cannes. The key characters – two aged friends who are whiling away the time in the Alps – were played by the British actor Michael Caine and American actor Harvey Keitel. Mădălina Ghenea appeared in this movie in the episodic part of Miss Universe.

In 2016 the Romanian model acted in the sequel to the comedy movie "Zoolander" directed by Ben Stiller. The movie received Golden Raspberry anti-award in spite of the fact that the Hollywood stars Penélope Cruz, Milla Jovovich, Benedict Cumberbatch and Justin Bieber had taken part in this movie. Mădălina Ghenea played an episodic role in this picture as well as in the previous movies. The same year the model appeared at the song contest in Sanremo: Ghenea hosted the show together with the Italian showman Carlo Conti.

The men with famous names appeared near Mădălina Ghenea. It seems, that the Hollywood star Gerard Butler was really fond of the Romanian-Italian model. There were rumors that the actor was just about to marry Mădălina, but unexpectedly their relationship had finished.

Soon, Butler was replaced by Leonardo DiCaprio, and the public began to talk about Mădălina Ghenea more and more. Their short novel had flashed during Leonardo's shootings in the picture "The Great Gatsby". Paparazzi photographed the couple on the balcony of the hotel room in Australia.

One more love affair which hadn’t lasted for long happened at Ghenea with Michael Fassbender: for the first time the couple was seen in January 2014, but in March their relations came to an end.

In 2015 Mădălina Ghenea became the muse of the German designer Philipp Plein. The tabloids were full of the pictures of the couple. Ghenea and Plein didn't conceal their relations and shared their joint romantic photos on the pages of Instagram.

Philipp got a tattoo with the name of his beloved woman on his hand. In media, there was information that during the trip to Paris Plein had made the girl the proposal. It is not known what happened, but in 2016 they parted.

In 2017 the beauty gave admirers a surprise: in summer she became a mother. Pregnant Mădălina’s photos appeared in spring on her page on Instagram.

Here her subscribers also saw the photo of the models’ husband– the 32-year-old millionaire Matei Stratan, the son of the Romanian business tycoon. The couple got acquainted in Bucharest, in the company of mutual friends. The daughter was born at the spouses. The face of the baby is hidden in the pictures. 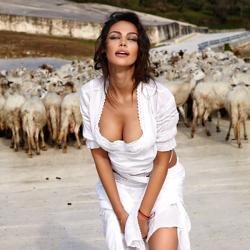