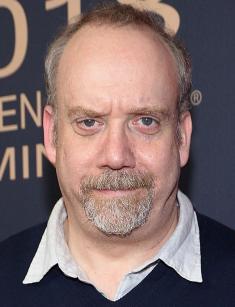 Paul Giamatti has played nearly 100 roles during his acting career that spanned over 30 years, won six prestigious awards, including an Academy Award, Golden Globe Award, and Emmy Award. However, his credentials are not completed. Paul Giamatti worked his way from a movie extra to an eminent actor, best known for his roles in the films Sideways, Cinderella Man, San Andreas, etc.

Paul Giamatti was born on June 6, 1967, in New Haven, Connecticut. His father, Angelo Bartlett Giamatti, was a Yale University professor who later became president of the university. Mother Toni Marilyn Smith was a homemaker and a former English teacher. Paul is of mixed European descent. He has English, Italian, and Irish ancestry.

The couple raised three children. Paul has an older brother and sister. Marcus also became an actor, and Elena is a jewelry designer.

“I have never been a clown and didn’t put on a show at home,” Giamatti admitted in an interview. - When I was a child, I ran, wrapped in toilet paper, imitating a mummy. But it did not mean that I loved acting. I was just a weird kid.”

Paul graduated from The Foote School in New Haven and later entered Choate Rosemary Hall. Then the young man studied at Yale University, where he was active in the student theater working alongside fellow actors Ron Livingston and Edward Norton. Paul graduated from college in 1989 with a bachelor's degree in English and earned a Master of Fine Arts degree from the Yale School of Drama, where he studied with the renowned teacher, Earle R. Gister.

Giamatti played in theater productions, including Broadway, before starting his brilliant acting career in 1991.

Although the actor played the first prominent role in the 1991 film Past Midnight, he was noticed after the release of the 1997 movie Private Parts. This comedy focuses on the creation of The Howard Stern Show, which was popular in America. Howard Stern played a cameo role, and Giamatti portrayed Kenny Rushton, his main antagonist.

In 1998, Paul appeared in some supporting roles in the big-budget films, The Truman Show, Saving Private Ryan, Dr. Dolittle, The Negotiator, etc. The following year, Paul’s filmography included the biopic Man on the Moon, telling about the fate of the outstanding American comedian, Andy Kaufman (Jim Carrey). Giamatti played Bob Zmuda, a writer, comedian, producer, and a close friend of Kaufman.

In 2003, Tim Burton's sci-fi movie Planet of the Apes was released. The plot centers on the conflict between humans and apes that captured the planet. Giamatti played the orangutan Limbo, who works in the trade business of human slaves, selling people to privileged primates.

In 2004, the actor played the leading role in the black comedy drama Sideways directed by Alexander Payne. Paul played an unsuccessful writer, Miles Raymond, who, along with close friend Jack (Thomas Haden Church), took a road trip through California. The film won an Academy Award, a BAFTA Award and a Golden Globe Award for Best Screenplay.

The following year, the actor consolidated success in the sports drama Cinderella Man, based on the biography of American boxer James J. Braddock. Giamatti played the role of his coach, Joe Gould, for which he was nominated for the Academy Award for Best Supporting Actor, the Golden Globe Award, and won the Screen Actors Guild Award.

“Frankly speaking, I have never wanted to be more than a good supporting actor. In fact, I like it,” the actor admits.

The next movie The Illusionist (2006) tells the story of the brilliant illusionist, Eisenheim. In this biographical drama, the actor co-starred with his friend Edward Norton (the title character), with whom he studied at Yale University. Paul portrayed Chief Inspector Walter Uhl, who narrated the story.

In 2007, the actor decided to play in the film genre that was different from his previous movies. He appeared in the light Christmas comedy Fred Claus. He and Vince Vaughn portrayed two brothers, who had to save Christmas for all humanity. A year later, Giamatti won his first Primetime Emmy Award for Outstanding Lead Actor in a Miniseries or Movie for his leading role in the miniseries John Adams about the life of the second President of the United States, John Adams.

In 2011, Giamatti appeared in The Hangover Part II, the sequel to the cult comedy The Hangover. Although the actor did not get the leading role, he portrayed a very bright and interesting character, a man named Kingsley. The same year he played in several films, including the leading role in the movie Win Win, and a bit part in the political thriller The Ides of March directed by George Clooney (his fourth time behind the camera).

The next year was no less fruitful, and the actor starred in 5 projects. The prominent films are 12 Years a Slave which won the Academy Award for Best Picture, Saving Mr. Banks, Romeo & Juliet. Besides, this year the actor was nominated for a Primetime Emmy Award for Outstanding Guest Actor in a Drama Series (Downton Abbey).

"I think that one of the great things about acting is instant gratification when you stand up and ... become part of the story,” Paul says about his work.

The only thing that Giamatti doesn't like about movies is that he seems to be shorter than he really is (the actor is 5.70 ft. (174 cm) tall).

There is little information about the popular actor’s personal life. He was married to Elizabeth Cohen from 1997. The actor’s wife is Jewish. The couple has a son, Samuel Giamatti (2001).

Giamatti does not tell about his life and does not use social media. On Instagram, people can find only fan pages with his numerous photos.

In 2018, Paul Giamatti got three prominent roles in the fantasy comedy I Think We're Alone Now, the melodrama Private Life, and the thriller The Catcher Was a Spy.

Nowadays, the actor films in the 2020 project Jungle Cruise, and also works as a producer of the television series Lodge 49.

Paul Giamatti has an estimated net worth of $25 million.