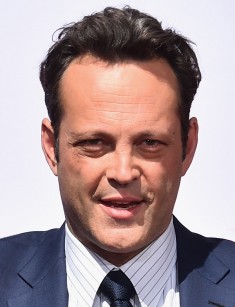 Vincent Anthony Vaughn is an American actor, who played the leading roles in the comedies The Break-Up, Four Christmases.

Vince was born on March 28, 1970, in Minneapolis, the largest city in the state of Minnesota. There were also two daughters, Victoria and Valeri, in the family of a former farmer, Vernon Lindsay Vaughn. Cattle breeding did not bring enough income, and the boy's father had to work as a railroad employee. Later, Vaughn changed a few positions, having worked at a factory, a mental hospital, and even a children’s goods store. Mother Sharon Eileen DePalmo was a hairdresser by profession, but the woman was engaged in real estate business.

Both parents were devout Christians, but at the same time the father went to a Protestant church, and his mother attended a Catholic church. Vince's family tree includes the representatives of nine nationalities from the European and African continents. In 1990, the marriage broke up, but Vince has friendly relations with both parents.

The boy was a hyperactive child, so the parents enrolled Vince in three sports clubs. He played American football and baseball as well as did wrestling. Besides studies at Lake Forest High School, Vaughn began attending the theater group and learned to sing. In 1987, one year before graduating, Vince got into a car accident and was seriously injured, which affected his further biography. The boy had to give up sports. But he had alluring opportunities in the theater.

Upon graduation from school, Vince took a position of a host at a local television company. The first shootings of the Chevrolet advertising company inspired the tall young man (Vaughn's height is 196 cm, the weight ranges from 93 to 104 kilos) to conquer Hollywood. In 1989, Vince went to California, where he immediately got a bit part in the TV series China Beach, CBS Schoolbreak Special, Doogie Howser, M.D., 21 Jump Street.

In 1996, Vince was cast for the comedy Swingers, where he first played a leading role. Doug Liman’s film grossed $ 4,5 million in the USA. Vince Vaughn and Jon Favreau became popular with their fellow Americans.

One year later, the actor appeared in Steven Spielberg’s fantasy film The Lost World: Jurassic Park together with Jeff Goldblum, Julianne Moore, Vanessa Lee Chester, and Pete Postlethwaite. The film was nominated for the Oscar Award and turned out to be a box office success. It grossed $ 618 million worldwide.

In 1998, the actor’s filmography included works in the drama A Cool, Dry Place, the thriller Return to Paradise, the horror film Psycho. Besides, the actor appeared in the cult TV series Sex and the City, having played a bit part in the first season. Having starred in the thriller The Cell and the crime action movie Domestic Disturbance, the actor began to explore the comedy genre.

He played the first comic role in 2001. Two friends, Jon Favreau and Vince Vaughn, decided to produce the crime comedy Made and play the title characters: reserved boxer Bobby Ricigliano and his over-talkative friend Ricky Slade, who always put any deal in jeopardy. In 2003, the box office comedy Old School was released, which centered on the foundation of the fraternity.

In 2004, Vince Vaughn first starred in the movie together with the comedy star, Owen Wilson. The comedy Starsky & Hutch was created as a parody film of a detective series from the 1970s. Vince played the role of a drug dealer trying to hide out from the police. In the Hollywood comedy film Dodgeball: A True Underdog Story, Vince played the part of the gym owner, who suffered losses.

In 2005, three major projects with Vaughn were released. The comedy Be Cool had an all-star cast that included Uma Thurman, John Travolta, Vince Vaughn, Danny DeVito. In the comedy thriller Mr. & Mrs. Smith, Vaughn played one of the title characters along with Brad Pitt and Angelina Jolie. In the film Wedding Crashers about two adventurers, Vince Vaughn worked on the same set with Owen Wilson again.

In 2006, Peyton Reed's comedy-drama The Break-Up premiered, where Vince Vaughn played with Jennifer Aniston. They portrayed an unlucky newly-married couple who decided to divorce. The film grossed $ 204 million, while Vaughn earned $ 12 million. In 2007, the comedy film Fred Claus was released, where Vaughn played the title character and worked as a director. Vince's income was $ 20 million.

In the comedy movie Four Christmases, Vince Vaughn’s hero together with Reese Witherspoon’s character visits the family celebration full of loving relatives, instead of going to the long-awaited vacation in Fiji. Continuing the family theme, Vince appeared in the film Couples Retreat in 2009.

Two years later, Vaughn played in the film The Dilemma, where the comedian’s partners on the set were Kevin James and Winona Ryder. In the 2012 film Lay the Favorite, Vince co-starred with Hollywood stars Bruce Willis and Catherine Zeta-Jones. The favorite duet of Vaughn and Wilson appeared in the comedy The Internship, which premiered in 2013.

In 2015, the crime drama True Detective directed by Nic Pizzolatto was broadcast on the HBO channel. In the second season of the series, Vince Vaughn got the role of Semyon, the head of the criminal group. The criminal has to investigate the crime, which caused multimillion-dollar losses. The first season won 5 Emmy Awards, but the second project was not very successful, so the producers closed the project.

For a long time, Vince Vaughn did not have a serious relationship. In 2000, the actor began dating his partner in the film South of Heaven, West of Hell, Joey Lauren Adams. In 2005, Vaughn had a love affair with Jennifer Aniston on the set of The Break-Up. A year later, the actors broke up. There was information that Vince betrayed her.

In 2009, the old bachelor fell in love with Canadian Kyla Weber, who at that time was engaged in real estate sales as well as Vaughn's mother. In 2010, they had a quiet wedding in Lake Forest, Chicago, inviting only relatives and close friends.

In December 2010, Kyla gave birth to a daughter, Locklyn Kyle, and three years later the first heir, Vernon Lindsay Vaughn, was born. One can see the photos of the happy family in the press or online media because the actor has no Instagram page.

In 2016, Mel Gibson’s war drama Hacksaw Ridge was released, where Vince got the role of sergeant of the allied army. The film was nominated for the Oscar, Golden Globe and BAFTA Awards.

Now Vince is working on three projects: the film The Forgiven, which is scheduled to premiere in 2017; the crime drama Dragged Across Concrete along with Mel Gibson in a leading role; the comedy Fighting with My Family where Vaughn will have a bit role.