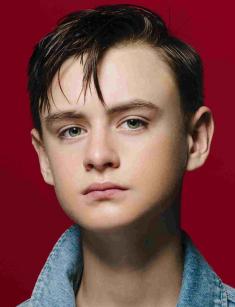 Jaeden Lieberher is an American actor who has become popular for the lead role in the movie It.

The would-be star was born on January 4, 2003, in Philadelphia, Pennsylvania. The boy’s father, Wes Lieberher, is a famous chief in the United States; the mother’s name is Angela Martell. The actor is the eldest child in the family and has two brothers and a sister.

The parents recognized their son’s acting talent early. When Jaeden turned eight, the mother took the children and moved to Los Angeles: the boy would have more opportunities there. However, there is no information about Lieberher’s education.

Jaeden Lieberher began his career at the age of nine, after he moved to Los Angeles, and appeared in commercials. In 2014, his first movie came out: the actor personified the six-year-old character of Chris Evans in Playing it Cool.

The same year, the movie St. Vincent was released. Lieberher played Oliver Bronstein. The movie also starred Naomi Watts, Bill Murray, and Melissa McCarthy. It is a story about a war veteran who starts abusing alcohol because of idleness and lack of self-realization. The man’s neighbors try to divert his attention and make him look after a 12-year-old school student.

In 2015, the young man participated in the movie Aloha starring Emma Stone, Bradley Cooper, and Rachel McAdams. In 2016, the teenager was invited to the movie Midnight Special and played a child with special powers.

The 2017 movie It brought a breakthrough. The actor had the opportunity to collaborate with Sophia Lillis, Bill Skarsgård, and Finn Wolfhard. The story begins in the late 1980s. The main character, 13-year-old Bill Denbrough (Jaeden Lieberher), teaches his younger brother how to make a toy ship.

The kid goes to get the ship in the water alone: the brother felt sick. Suddenly, the scary clown Pennywise (Bill Skarsgård) appears from a drain. The circus artist invites the small boy to travel with him and see the world full of cotton candy and popcorn. However, he is rejected; instead, little Georgie (Jackson Robert Scott) offers the clown to take the toy ship.

Pennywise attacks the kid, bites off his arm, and grabs him to the drain. Bill (Jaeden Lieberher) had been trying to accept his brother’s death for nine months but failed. The teenager gathers together with his friends Richie Tozier (Finn Wolfhard), Stan Uris (Wyatt Oleff), and Eddie Kaspbrak (Jack Dylan Grazer) to save Georgie.

The group of friends is nicknamed “the losers’ club”. At this time, school students continue to disappear, yet adults do not rush to investigate these cases. Later on, the teenagers find out that It comes to the town every 27 years, murders children, and grabs their bodies to a drain. The friends decide to fight the clown.

Jaden Lieberher took part in TV shows including Masters of Sex and American Dad! The young actor is getting more and more popular. Acting is not just a job for Jaeden: it is his hobby. The young talent has been appreciated by critics: the teenager won Las Vegas Film Critics Society Awards and Phoenix Film Critics Society Awards for St. Vincent. In 2018, he received MTV Movie & TV Awards – Best On-Screen Team for the movie It.

The young artist does not think about relationships; there is no information about his romances in the media. Lieberher prefers to develop his acting skills and appear in movies rather than collect love affairs.

Jaeden is on friendly terms with his colleagues. However, when he goes for a walk with a girl, many fans ask him if she is his girlfriend.

Just like the majority of the young generation, Jaeden is an active user of social networks: he has Instagram and Twitter accounts and regularly posts photos from friends’ parties, movie sets, and vacation.

The movie It is the actor’s recent work. Soon, Lieberher will appear in the movie The True Adventures of Wolfboy.