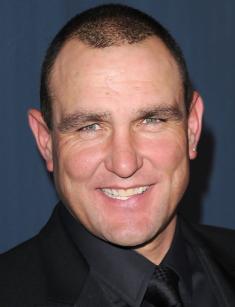 Vinnie Jones is a charismatic actor from the UK, in the past-a football player who played for Wimbledon, Leeds United, and Chelsea clubs. This man is known around the world for his unique style of playing football, based on rigidity and aggression, and memorable roles in popular films about X-Men.

Vinnie Jones' path to glory and recognition was long and difficult. As a child, at an early age, he became interested in football, started training at children's sports school. His coaches were the best specialists in England, so after a while, Jones had already worked out a great technique, the accuracy of the pass and the "reading" of the game. However, the height of the guy was not suitable, so the way to the big football was closed for him– the coaches did not see any prospects for such a short player.

Vinnie got in the world of professional football through amateur football, he and a team of like-minded people literally broke into the sports scene and attracted the undivided attention of coaches of professional clubs with a series of crushing victories at the amateur level and in the lower leagues of the country.

The top clubs of the country noticed the technical and sharp player, who was Vinnie. He managed to play in many professional clubs within the top league of England, and he participated in international football tournaments as part of the national team of Wales. His choice of the team of Wales instead of England's can be easily explained, the behavior of Vinnie on the field closed his way to the English national team, but due to the Welsh ancestors from his mother's side, the player was able to play for neighboring Wales.

For an overly hard game and aggressiveness on the field, the player got a nickname, the Axe. He was removed from the field a significant number of times; his behavior was considered the worst among his contemporaries, he got red cards after three-seconds on the field. Vinnie became a kind of notorious legend, an example of how not to behave.

His action towards the player of Newcastle United still strikes the public: then, Vinnie's opponent, Paul Gascoigne felt Jones grab him by his testicles during their fight for the ball.

His age brought the career of a football player to a logical conclusion-33-year-old Vinnie gave up the sport and went into the film industry, without having attended at least any acting classes.

The motivation to succeed after a sports career for Vinnie was an article by a sports journalist, in which the author noted that "after football, Vinnie would just disappear, and we would never see him again." Although Jones did not like the elite life and the Hollywood atmosphere, he didn't want to become a nobody after football.

The creative biography of Vinnie in the film industry began with the films of Guy Ritchie, where he played a"cool, tough guy." The first work in the filmography of Jones was the legendary crime comedy film of the late 90's Lock, Stock and Two Smoking Barrels, soon followed by the filming of the blockbuster Snatch.

Such character started to be associated with the actor because his height (6 feet 16 inches) and an impressive appearance along with a courageous look organically fit into the image of the "bad guy." Over time, Vinnie became even more brutal, having increased his body weight. During his football career, his weight did not exceed 167.5 pounds; later Jones gained another 28 pounds.

It turned out that Vinnie has a hidden acting talent, and he was able to play both comedy and dramatic roles. For example, Vinnie Jones portrayed the spicy character of a scandalous football player who went to prison and there decided to put together a football team in the sports comedy film Mean Machine.

His acting in popular films began to receive positive reviews from film critics; he became the winner of several international awards. But after that, it was the film critics who published articles predicting the demise of the career of Jones. And he continued to star in one film after another.

He was invited to star in a high-budget film, in which the leading roles were played by top stars – Jason Statham, Brad Pitt, Hugh Jackman, Halle Berry, and others. Vinnie's characters are different, but best of all he can play in crime comedy films and sports drama movies. He starred in American and English movies and got offers from European and Asian film directors. However, there he played similar roles as a "tough American guy."

During the period from 1998 to 2016, Vinnie starred in more than 100 movies and television series. Juggernaut from the superhero action movie X-Men: The Last Stand; the serial killer Sebastian Moran, also known as "M" from the procedural drama series Elementary. Vinnie Jones also did not turn down the opportunity to get into the character of a bloodthirsty butcher who killed people in the horror film called Midnight Meat Train starring Bradley Cooper.

On Twitter in 2016, Vinnie Jones told fans that he was going to play in the film Kingsman: The Golden Circle together with such Hollywood stars as Colin Firth, Channing Tatum, and Julianne Moore.

In 2013, Vinnie Jones took part in the making of an original television project. He tried himself in the role of an employee for some of the toughest jobs in the technology documentary Vinnie Jones: Russia's Toughest. That is how he made the Russian audience finally and irrevocably fall in love with him. In one interview, the actor shared his impressions of Russia. According to Vinnie Jones, the hospitality of Russians is like Irish hospitality. The actor was also surprised by the opportunity to travel by train without a break for 24 hours, and the fact that in many regions simple ride between settlements could turn into an extreme adventure. The journey could not be complete without the symbol of Russia - the bear, which Jones repeatedly encountered in the taiga.

Winnie also managed to participate in a couple of TV projects, to work in the newspaper (he ran a sports-column) and to comment on the number of football matches of the highest league. Vinnie Jones is no stranger to music either – he recorded several Blues albums containing his songs, showing great musical and creative skills.

The hot guy Vinnie Jones has always been popular with girls. During his work for Wimbledon, he met Milene Elliston with whom he began what would turn out to be a short-lived relationship. The football player did not plan a wedding, but in 1991 Milena gave him his firstborn son, Aaron. The boy remained to live with his mother, but he also maintains a close relationship with his father.

In the mid-90s Vinnie decided to settle down and married Tanya Terry, his longtime friend, the ex-wife of football player Steve Terry. The couple does not have any children together, but they raise Tanya's daughter from her first marriage, Kaley. At one time the Jones family lived in England near the town of Sheffield. In the early years of marriage, Tanya underwent a heart transplant operation, after which Jones donated his paycheck from the filming of the movie, which brought him his fame, Lock, Stock and Two Smoking Barrels, to the clinic.

In 2013, the public learned that Vinnie and his wife were struggling with a terrible illness, skin cancer. At this point, the actor's wife had been fighting cancer for seven years. The cause of the tumors were hormonal pills that Tanya had taken for decades. Vinnie was diagnosed with cancer later. The tumor in the form of a mole appeared on the actor's face.

Over the following two years, the family was doing everything to defeat the disease. Both husband and wife underwent numerous surgeries to remove tumors. Jones had three tumors removed. The actor suspects that their cause was the fact that he came out onto the football field without protection from UV rays all the time. Fortunately, both spouses managed to overcome such a dangerous illness and restore health.

The media found out that the actor had an affair with Russian singer Lama Safonova. But the relationship did not last long as the girl had no intention to build her love life at the expense of ruining another family. Nevertheless, the fling between the two stars was noticed by reporters of Russian and foreign media, photos of performers were on the pages of popular tabloids.

Vinnie's nature often leads to scandals. At first, it was brawls, fights and overly aggressive behavior on the football field, then, in his personal life. He was caught drunk driving, fined for overly provocative behavior in public and loud parties.

Repeatedly it came down to calling the police and making accusations. The court charged hot-tempered and formidable Vinnie for attacking a neighbor and causing him serious physical harm. He was also found guilty of violating the rules of conduct of the passenger during the flight – then Vinnie not only got drunk and hit a passenger but also threatened the pilot and his assistants. The actor paid a fine and worked eighty hours of community service.

Vinnie is not ashamed of his violent nature; he boldly talks about the dirtiest football tricks and claims that he is not hurt by criticism. He does not believe that his work has made an invaluable contribution to culture or sports. Jones is just doing what he can.

Controversial Vinnie Jones would not be himself without some noble deeds. A social advertisement by the British Heart Foundation organization was created with his participation; there Vinnie in the character of the "bad guy" explains the principles of a heart massage.

Vinnie Jones doesn't have his own Instagram account, but photos of the favorite actor appear in the profiles of his fans.

The popular actor regularly receives offers from film producers. Vinnie Jones has plenty to choose from. Recently, he has played in the action film starring Steven Seagal, Absolution, in the action adventure movie starring Brian Austin Green Cross Wars, and took part in the filming of the crime thriller film Life Outside, in which Rob Schneider played the leading role.

Soon the comedy movie Madness in the Method and the thriller film The Killer's List are going to be added to the actor's filmography, as his participation in these projects has been announced. Net worth is $10 million.