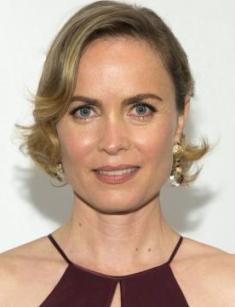 Radha Mitchell is an actress, who is known for her roles in the tapes Phone Booth, Silent Hill, Finding Neverland. The filmography of the artist includes dozens of roles in full-length movies and TV series. She is involved in the filming of the movies in front of the camera and behind the scenes. She acts as a producer, screenwriter and director.

Radha Mitchell's full name looks unusual: Radha Rani Amber Indigo Ananda Mitchell. The girl's parents were fond of Hindu traditions and religion. She was named after the Hare Krishna faith when she was born.

Radha was born on November 12, 1973, in the Australian city of Melbourne in the family of the director and designer. Her mother and father were creative people and they were not against the choice of her future profession and lifestyle. Radha had no brothers and sisters.

The future actress received a school education at St Michael's Grammar School. Her parents paid great attention to Hindu culture and self-development in the upbringing of their daughter, so Radha knew about yoga and mantras from childhood.

The Australian TV star made her first steps in acting, becoming a member of the television series for children. Her debut dramatic role in the movie was the image, which was created for the project Sleeping Beauties. The tape was presented at the Sundance Film Festival.

She had potential. Directors and producers noticed it, so there were interesting offers in the creative biography of the TV star. In 1994, she starred in the television series The Neighbors. The project brought an exciting experience because the performer had to turn into two characters, which were not similar in nature and temperament.

1996 was marked by filming in a comedy called Love and Other Disasters. The light romantic movie fell to the taste of the public. Critics spoke positively about Mitchell's work and her talent. The movie was presented at the festivals in Cannes and Sundance. Each project brought her new skills, allowing her to develop, challenge for herself and trying her abilities in a new perspective.

In 1997, Radha Mitchell was the winner of the Film Independent Spirit Awards. The girl received a prestigious award for her work on the movie High Art. The tape Pitch Black, which was released three years later, made the artist more popular because she acted as a producer in it. The movie, which was shot by Cole Hauser and Vin Diesel, was nominated for the Film Independent Spirit Awards in 2000. Radha Mitchell starred in the tape Cowboys and Angels, continuing her acting career.

The TV star starred together with popular actors, who are well-known in Hollywood and loved by the audience. Radha appeared on the screen with Skeet Ulrich and Gary Oldman in the tape Nobody's Baby, which was released in 2001. This work was followed by a mini-series, where Mitchell worked along with Donald Sutherland. The girl starred in the tape Dead Heat, which was released in 2002, together with Kiefer Sutherland and Anthony LaPaglia.

The participation in the movie Phone Booth brought her the acquaintance with the aspiring star Colin Farrell and new experience of work on the thriller. 2003 gave the actress a role in the tape Monster's Ball, where she turned into the wife of the hero, played by Johnny Depp. This movie told the story of the creation of the legendary fairy tale Peter Pan. Then Radha did not know that the work with the children's book would repeat after a couple of years.

The unique role for the actress was the heroine Georgia Perry. The woman, who first took a trip around the world without an escort, caused respect and pride. The difficulty in working on the role was the fact that Georgia had a mental disorder, as a result of which she began to see the phantoms that accompanied her on the trip. The actress demonstrated the ability to turn into different roles and existence in the given circumstances masterfully.

The movie Man on Fire brought the actress the cooperation with Denzel Washington but fans were fascinated by her participation in the project called Finding Neverland. Radha Mitchell starred with Johnny Depp and Kate Winslet and the plot of the tape was associated with the story of Peter Pan. Mitchell became the winner of the Oscars for her role in the project and her colleagues were the owners of the Screen Actors Guild Awards.

The performer worked on the movie Melinda and Melinda and Mozart and the Whale soon. The role of Rose in the horror tape Silent Hill was a success in the career of the actress. Mitchell confirmed that she has the skill of transformation in different directions for projects.

Radha starred together with such actors as Sean Bean, Laurie Holden. The horror movie was very popular, so fans waited for the return of their favorite characters on the screen. It took place in the tape Silent Hill: Revelation 3D in 2012.

The fantastic thriller Surrogates, which was created with the participation of Bruce Willis and Radha Mitchell, confirmed the versatility of the actress and her flexibility in working on the role. Radha gives each character individual traits, turning into strong personalities. She copes with lyrical and comic images easily. She is successful at drama and fantasy too.

Radha's career develops in front of millions of viewers but her own life is behind the scenes. The artist is one of the celebrities who prefer to hide the details of everyday life and family. It is unknown whether the actress has a husband and children.

Radha does not have her page on Instagram but she has an account on "Twitter." But you can see her photos with friends, in a swimsuit for a new advertising campaign and the process of the filming on the accounts, created by her fans.

She spends her free time with her close people. She continues to lead a healthy lifestyle and does often yoga. Mitchell follows a vegetarian diet.

The artist can star in any movie genres, so she remains in demand among the directors in Hollywood and at home, in Australia. Radha continues to participate in the filming, having studied the features of acting. Radha Mitchell has a net worth of $4 million.

Since 2000, Radha Mitchell tries her hand in different fields of acting. She produced such tapes as Thaanaa Serndha Koottam, The Waiting City. Mitchell became the director and screenwriter of the tape Four Reasons. She continues to work on the movies and she is open to new offers. In 2018, she appeared in the series The Romanoffs. It is the series about the descendants of the Royal dynasty. She had the role of Victoria Hayward.