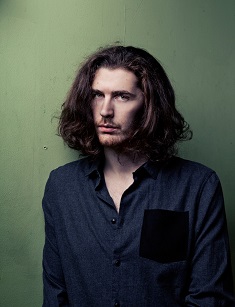 Hozier is an Irish singer and songwriter known for the hit single "Take Me to Church". A young but very ambitious man made a success at a pretty early age, not to mention his involvement in a discussion of social problems, such as domestic and gender violence.

Andrew Hozier-Byrne (his original name) was born on March 17, 1990, in Bray, Ireland. He comes from a talented and creative family, and it explains his reckless love for music. Hozier's father (John Byrne), a local blues drummer, played in the music blues-band called Free Booze. His mother (Raine Hozier-Byrne) is a genius artist. She painted a cover for Andrew's music album.

Andrew is from a Christian family. He and his brother grew up in the Protestant Quaker faith. Hozier obtained an education at Delgany National School and St. Gerard's School. After finishing school, Andrew entered Trinity College in Dublin. There he began to study music, but during the first year of studies he was expelled from college to record demos for the music corporation Universal Music. It was a time when he made up his mind to become more independent and when his music career was about to begin.

Already at the age of 15, Andrew started to compose songs. His favorite genres in music were R&B, soul, gospel and blues. These music preferences heavily influenced on Andrew's performance style in the future. He started his career while in Trinity college when he began singing in the Trinity Orchestra. He was a member of the Irish vocal ensemble Anúna (2009-2012), and took a part of a soloist, singing "La Chanson de Mardi Gras" on their release Illumination in 2012. Andrew went on many tours with an ensemble including Norway and the Netherlands.

In 2013, Hozier recorded his first Extended Play called "Take Me to Church" which brought him an incredible success all over the world. How did it happen that the song turned to be so popular? The meaning of the song is deep, signifying Andrew's resentment concerning the Catholic Church's teachings. In one of his interviews, he talks about the insincerity of the Catholic church. The work is about violence against gays in Russia. It's a love story of two boys who are strongly despised by society, and one of them badly suffers from a brutal beating. Directed by the American musician and filmmaker Brendan Canty, it was shared by Stephen Fry (English comedian, actor, writer and activist) by tweeting a video link to his eight million followers.

Later it was posted on the front page of Reddit and has rapidly spread through the Internet. At the present moment, it has over 260 million views on YouTube channel. The song started to gain high popularity and peaked on the top charts in many countries. It was in the first position in Italy and Belgium and got the second position in the US, Canada, the UK and Germany. In October, 2013 "Take me to Church" has been given a leading position on iTunes. The singer took a BBC Music Award, two Billboard Music Awards, a Teen Choice Award and a Grammy nomination for the song.

In March, 2014 Hozier got his second EP called "From Eden" out. It included the following songs: "Work Song", "Arsonist's Lullaby" and a live version of "To Be Alone". In 2016 the song "Arsonist's Lullaby" was presented in the trailer for crime drama film "Live by Night", written and directed by Ben Affleck. The title song from the EP soared to No. 2 in Ireland and reached No. 69 in the UK. The EP "From Eden" deserved platinum certification in Ireland, Australia, Canada, the UK, the US and New Zealand.

In September, 2014 Hozier launched his first studio album with an eponymous title "Hozier". The album included five singles such as "Take Me to Church", "From Eden", "Sedated", "Work Song", "Someone New", "Jackie and Wilson" and "Cherry Wine". During a live performance in Boston, Hozier shared with his fans that the song "Cherry Wine" was recorded in the depth of the night in an old hotel when he felt very drained and exhausted. So the conditions were not so favorable, but to the surprise of the author, it appeared on his first studio album! Songs "Like Real People Do", "To Be Alone" also found a good response in public.

In June, 2016 Hozier released a hit track "Better Love" which went as a soundtrack to the adventure film "Legend of Tarzan". Hozier launched the official video of the song at the same moment he dropped the song out.

In 2018 EP "Nina Cried Power" is made, in which Hozier also expresses his passion for the music in general sense. The title publicly mentions musicians who strongly defend civil rights, such as Joni Mitchell, Nina Simone, James Brown, Billie Holiday and Mavis Staples (American gospel singer, actress and civil rights activist.). Mavis Staples herself is in collaboration with Hozier in a title track "Nina Cried Power", besides three other songs: "NFWMB", "Moment's Silence" and "Shrike", which were featured in the album.

In January, 2019 Hozier puts out his second album, called "Wasteland, Baby!". It's his first album since 2014. It took him a year to write and record it. The song "Almost (Sweet Music)" is the first single that came out in 2019. It is characterized by fans as a song with a sweet voice and lyrical guitar. The specialty of the song is lyrics that consist mostly of song titles from a past era. Throughout the song, Hozier refers to classic jazz music that, according to his words, calms him down. Hozier uses at least 17 of his favorite songs in the lyrics of this track. They are some of them: "Stella by Starlight" by Frank Sinatra, "That Was My Heart" by Ella Fitzgerald, "Sweet Jazz Music" by Jelly Roll Morton, "Dancing In The Dark" by Duke Ellington, "Let's Get Lost" by Chet Baker, "Let The Good Times Roll" by Ray Charles, "Smoke Rings" by Sam Cooke and others. By mentioning them, Andrew acknowledges the merits of these iconic musicians and all classic songs of romance.

The album also features the songs "Nina Cried Power" and "Shrike" from the 2018 EP "Nina Cried Power", and the single "Movement". To promote the album, Hozier wrote down and then notified the tracklist in a video that he posted to Twitter, showing the album's cover, painted by his mother. It should be said, that Hozier has one of the most amusing Twitter accounts among the others.

Listeners and fans of Hozier wonder: "Who is his girlfriend? Is he married? Is he a gay?". There is some information that Andrew is currently dating Saoirse Ronan, an Irish and American actress. The couple reportedly got close during work on the song "Cherry Wine". Hozier used it for his campaign against domestic abuse, and the earnings from the single went into anti-domestic violence charities. Hozier and Ronan had some secret dates together, and they seem to be enjoying the company of each other but aren't eager to share it with the audience. In some interviews, Hozier noted their strong friendship and support of each other.

Andrew spoke out about the rumors concerning his sexual orientation, saying with no extra comments, that it's up to people to think whatever they want.

Aside from music, the young and talented Irish singer, Hozier has investments in Substantial property holdings, Smart Stock Investment and also has an inducement deal with CoverGirl Cosmetics. Hozier is the owner of "Fat Hozier Burger" chain, a restaurant in Dublin. The singer is the owner of the "Bray Angels" Football Team, Pure Wonderhozier, a vodka brand in Ireland. In the industry of fashion he represents himself with the company "Love from Hozier", that sells perfume, and fashion line "Hozier Seduction". Hozier's net worth amounts $50 Million.

With his particular style of performing that varies from moody, melancholic music to encouraging and giving hope for changes, and his excellent voice, Hozier shows great potential and worthily typifies his homeland on a world music stage.