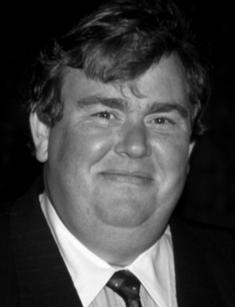 They say that the merrier the actor looks, the sadder his real life is. This assumption is largely true of Canadian comedian John Candy, who died at the age of 43. Viewers know him for the comedies Splash, Spaceballs, Uncle Buck, Canadian Bacon.

John Franklin Candy was born on October 31, 1950, in Newmarket, Ontario, to Sidney James and Evangeline (née Aker). The boy’s father had English and Scottish ancestry, and his mother was of Polish and Ukrainian descent. Candy's birth house is located a few blocks from the residence of another Canadian comedian Jim Carrey.

In childhood, John lost his father when 35-year-old Sidney died of a heart attack in 1955. The mother raised her son Catholic trying to forget the grief. Until the 8th grade, he attended the Holy Cross School in Scarborough, a suburb of Toronto, then Neil McNeil Catholic High School.

The Canadian wanted to become an actor at the Centennial Community College, where Candy studied journalism. The future comedian chose the theater department at McMaster University in Toronto.

Candy rose to fame at the age of 27, when he became a member of the Toronto branch of the Second City. He performed a live sketch comedy show alongside Catherine O’Hara, Eugene Levy, Rick Moranis, Harold Ramis. In 1976, the comedians created their comedy-variety TV show.

Mimicry was one of Candy’s talents, which made him a favorite actor. During the existence of the Second City, the comedian portrayed actors Jerry Mathers, Divine, Richard Burton, director Orson Welles, chef Julia Child, opera singer Luciano Pavarotti, and others.

The national love of Americans led John Candy to Hollywood. In 1979, he starred in Steven Spielberg’s war comedy 1941, played a bit part in the classic action movie Blues Brothers (1980) with John Belushi and Dan Aykroyd in the lead roles. The latest project was a hit in the United States, which increased the popularity of the Canadian comedian.

Candy might have appeared in Ghostbusters (1984), but he refused to play, and the part went instead to SCTV colleague Rick Moranis. However, the comedian appeared chanting "Ghostbusters" in Ray Parker Jr.'s hit "single" for the movie, alongside other actors who could not join the project for various reasons.

1987 was particularly productive for the actor. The comedies Spaceballs and Planes, Trains and Automobiles were released. According to critics, the last project is the classical Hollywood masterpiece and one of Candy’s best movies. The exceptional talent of director John Hughes and his ability to create humorous situations contributed to its success. The men met on the Second City TV show.

Despite the enormous success of the Christmas comedy movie Home Alone, in which Candy played musician Gus Polinski, the actor’s popularity was declining. He decided to change strategy and starred in several serious films, including JFK (1991).

There is an interesting fact that Candy's character, lawyer Dean Andrews Jr., was constantly sweating, which was not the director’s idea, but the body’s natural reaction. The thought of filming in the drama film with actors such as Donald Sutherland and Gary Oldman scared the actor too much.

Candy’s serious projects also include Only the Lonely (1991), Cool Runnings (1993). The last movie with the participation of the actor was the parody film Wagons East (1994) since the comedy Canadian Bacon was released after his death.

On April 28, 1979, Rosemary Margaret Hobor became John Candy's wife. They had two children, Jennifer and Christopher, in the marriage. The couple lived together until the comedian's death in 1994.

Judging by his early photos, John Candy was a tall and stout man, even in his youth, his weight was rarely below 286.60 lbs. (130 kg) with a height of 6.16 ft. (188 cm). The comedian was very sensitive to his fullness, in the 1990s he began to lose weight actively, quit smoking, although he had these bad habits for over 20 years and used drugs (cocaine) in his past. The fact that both Candy’s father and his grandfather died of a heart attack was decisive. The actor did not want to have the same destiny.

In 1994, the comedian went to Mexico to shoot the comedy Wagons East. According to Candy’s close friend, Catherine O’Hara, the actor was nervous about the trip, saying that “something bad was going to happen there." And it happened on March 4, 1994, when 43-year-old John Candy died in Durango, Mexico. The cause of death was a heart attack. John Candy had a net worth of $15 million at the time of his death in 1994.

The death of John Candy was a national tragedy. According to Eugene Levy, the Second City actor, when the funeral cortege with the body of the comedian was going to the cemetery, the police had to clear the way.

It was an unprecedented event since in America the streets are blocked only during the visit of presidents and the Pope.