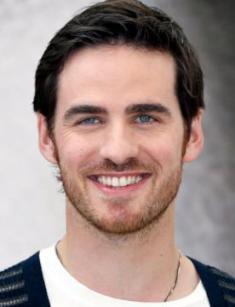 The young Irish actor, Colin O'Donoghue, rose to prominence playing the role of Captain Hook in the drama fantasy series Once Upon a Time. Real fans of the charming actor know that their idol has a versatile talent. Colin is a great rock musician and singer, stage actor, and showman.

The future movie star was born in the first month of 1981 in the Irish port town of Drogheda, which is 56 kilometers from Dublin. His Roman Catholic parents, Con and Mary, named the first-born son Colin Arthur O'Donoghue. Later, the second son, Allen, was born. The children were brought up in a lovely and religious environment; the strict parents instilled respect for family values.

Colin was an artistic boy who showed his talents in childhood and adolescence when he studied at Dundalk Grammar School. After graduating from it, O'Donoghue went to Dublin, where he improved acting skills at the Gaiety School of Acting. At the age of 16, the curious young man went to Paris to broaden his horizons, where he studied French and got acquainted with the culture of the country.

Upon returning to his homeland, he continued to improve skills, dreaming of an acting career.

Colin O'Donoghue began his acting career on the theatre stage, but the Irish quickly appeared on television, playing the first roles in low-budget projects. In 2001, viewers saw the actor in the TV series Rebel Heart. A year later, the actor appeared as Norman Quested in the drama Home for Christmas, shot by Norwegian director and screenwriter Bent Hamer. In 2003, O'Donoghue won the Irish Film & Television Award for Best New Talent for his work in this film.

In 2004, the young actor was invited to play the role of Peter in the low-budget film Love Is the Drug. The next project, the Danish-Irish television show Proof, made Colin O'Donoghue famous in the UK and Ireland. English director John Madden offered the Irish a bit part of a guy named Jamie, while the Hollywood stars Gwyneth Paltrow, Anthony Hopkins, Hope Davis, and Jake Gyllenhaal portrayed the title characters in the drama.

The movie with such a starry cast could not go unnoticed, as well as the young actor who appeared in the project with the legends of world cinema. It is not surprising that since then, directors and producers have paid close attention to O'Donoghue. Colin was offered roles in the projects Fair City, 24/7, The Clinic.

A real success for the rising star was the participation in the historical drama of the English director and screenwriter, Michael Hirst. The master invited the actor to portray Duke Philip of Bavaria, and according to critics and viewers, he coped with the task brilliantly. Thanks to the drama series The Tudors, the Irishman, who appeared on the screen in the 3rd season, achieved the first reverberating fame and gained experience of filming in large-scale historical projects.

The role in The Tudors helped Colin O'Donoghue to make it into the Dream Factory. In 2011, viewers saw a talented actor in two American films. Colin starred with Angela Bassett and Bree Turner in Gary Fleder’s drama film Identity.

Film critics and viewers were not enthusiastic about the movie. But the second film, the mystical thriller The Rite, was a box office success and made three times its production budget. The Swedish director, Mikael Håfström, who has worked in Hollywood for a long time, selected a starry cast in the movie.

The Rite is a film adaptation of Matt Baglio's book about exorcists and their rites. Seminar Michael Kovak (Colin O'Donoghue), who has graduated from a religious, educational institution, is skeptical about the rite of exorcism. But, he has changed his mind having visited the Vatican, where he met Father Lucas (Anthony Hopkins). Legendary Rutger Hauer played the on-screen father of seminarian Kovak.

A year later, Colin was invited to portray Captain “Hook” Jones in the second season of the fantasy series Once Upon a Time. Viewers liked the new character and the actor so much that O'Donoghue starred in all subsequent seasons of the series. In general, seven seasons of the project were released. The final episode premiered in the spring of 2018.

On the set, the Irishman met Jennifer Morrison, Ginnifer Goodwin, Lana Parrilla, Robert Carlyle, and other famous colleagues. Nowadays, the charismatic captain is the best role in the filmography of the actor.

Acting in the series, Colin O'Donoghue managed to work on the set of other projects. In the spring of 2016, he appeared in the drama The Dust Storm, in which fans saw the actor as a title character named Brennan. It is a melodrama about a musician suffering from the shoals of life, who met a former lover.

Colin’s colleagues and friends that he is beautiful not only externally, but also internally. O'Donoghue does not have a superiority complex, and he is friendly and straightforward. He doesn't set tongues wagging because he created a strong family, which he values very much.

In 2009, the actor married a woman named Helen. In 2013, his wife gave birth to their son, Evan, and in 2017, they had a daughter, Millie. Helen O'Donoghue has nothing to do with the film industry and show business. She is a modest school teacher and a homemaker.

The star has a happy marriage. If Colin has to be far from home for a long time, leaving his native Ireland, he certainly takes the silver crucifix that his wife gave him.

The family settled in the actor’s native town, Drogheda, and is not going to change the city to sparkling Los Angeles to be closer to Hollywood. Colin says that no one knows how his fate and acting career will develop. Glory is short-lived, and the house where the wife and children live, the city in which he was born is forever with him.

The Irish star has a hobby and devotes his free time to it. It is the rock band The Enemies, where O'Donoghue is a guitarist and frontman. In 2011, the group recorded a studio album, but due to shooting in the USA, the artist had to give up his passion.

In August 2018, Josh Mendoza’s American thriller What Still Remains was released, in which O'Donoghue starred with Lulu Antariksa, Mimi Rogers, and Dohn Norwood.

In 2019, the man appeared in the series Heartstrings, in which the actress and the Queen of Country, Dolly Parton, played the title character. Colin O'Donoghue, Athena Akers and Sarah Shahi landed the supporting roles.

Now the actor is busy filming in the British-Irish melodrama Fairytale of New York. The release date of the film is unknown.

Colin O'Donoghue has an estimated net worth of $2 million.