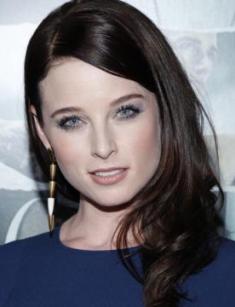 Rachel Nichols is an American actress who starred in the series Continuum and the movies P2 and Pandemic.

The would-be artist was born in Augusta, Maine, in January 1980. The family had nothing to do with cinematography or theater; the father worked as a teacher in a local school.

The girl was an awkward teenager with long, thin arms and legs. To improve her body, she began to do sports and chose track and field and broad jump; besides, she attended a dance studio to make her movements graceful.

At 17, Nicholas tried herself as a TV presenter: she succeeded at the auditions and worked on the entertainment program Revenge on MTV. Although Rachel did not stay there for long, she took fancy in being in front of a camera.

During her senior year, Nichols went to France via a student exchange program. This is where a modeling agent noticed the slim beauty and invited her to participate as a model at Fashion Week. The young woman accepted the offer. Soon, she appeared in commercials for L'Oreal, Guess, and Abercrombie & Fitch; glossy magazines regularly published her pictures.

Rachel spent the money she had earned on education: she went to New York and entered Columbia University; she was going to be a financial analyst. In 2003, Nicholas got her degrees in economics and math; she also studied psychology and drama at the university.

Rachel Nichols started her movie career in 2000 when she was a university student: she appeared in Autumn in New York, one of the best Hollywood melodramas. The beginning actress had the chance to see Richard Gere and Winona Ryder work. Although the artist took part only in an episode, it was a successful beginning. Inspired, Rachel took up acting classes.

Two years later, Nichols had another episodic role of Alexa in Sex and the City; an agent helped her find it. The young woman realized she would like to be an actress. She collaborated with many celebrities: Sarah Jessica Parker, Kim Cattrall, Kristin Davis, and Cynthia Nixon; their skills impressed Rachel.

The next year, the artist was invited to Dumb and Dumberer: When Harry Met Lloyd (2003) to play one of the main characters. Although critics’ reviews were scathing, it was a priceless experience for Nichols.

The role in The Amityville Horror followed. It is the story about a cold-blooded murderer whose behavior is determined by mysterious voices.

In 2005, Rachel appeared in the melodrama Shopgirl, the series Alias, and the sports drama Resurrecting the Champ. Once again, several horrors came next: The Woods, Them, and P2. The latter brought the actress much fame. Rachel’s character was wearing a provocative dress throughout the whole story; initially, the screenwriter wanted her to wear a short nightshirt, but the artist insisted her clothing should be more appropriate.

After P2, the actress had many new offers; she participated in three or four projects every year.

In 2011, Nichols gained the role of Tamara, the lover of Conan (Jason Momoa), in the adventure movie Conan the Barbarian by Marcus Nispel; the project failed, though. The next year, the actress joined the cast of Rob Cohen’s detective Alex Cross. She personified Monica, the murdered partner of the detective Cross (Tyler Perry).

In 2012, Nichols tried herself as a producer and worked on the fantastic series Continuum where she also played the main character, Kiera Cameron, who came from the future. In the present day, she becomes a police officer and chases the criminal gang that also arrived from the future. The ratings of the series broke records in the first days; overall, four seasons were filmed in Canada.

Rachel likes the fantasy drama genre. In 2013, she participated in the series Witches of East End starring Julia Ormond and Jenna Dewan Tatum; the woman had a secondary role of Isis. The same year, Nichols appeared in Raze and McCanick.

The series about a fire brigade Chicago Fire proved to be a success, too; seven seasons have been made so far.

In summer 2008, the actress married the director and producer Scott Stuber. The wedding ceremony took place in Colorado; the couple looked happy and amorous. Rachel came back to her natural hair color, blond.

After the honeymoon, the couple began to build a house in Cabo San Lucas. However, their relationship deteriorated; they split up in winter 2009.

Although Nichols does not like to talk about her personal life, she openly announced her marriage to the real estate developer Michael Kershaw in 2014.

In 2016, the actress became a victim of the hackers who extracted personal information from the celebrities’ iCloud accounts. Jennifer Lawrence, Kirsten Dunst, Avril Lavigne, Vanessa Hudgens, and Rihanna were among them. The FBI investigated the crime.

In 2016, the artist appeared in the movie Pandemic about a lethal virus spreading over the planet. Only the vaccine that Dr. Lauren Chase (Rachel Nichols) invented can save humanity.

2018 was marked with the fourth season of the adventure series The Librarians. The actress played the immortal villain Nicole Noone.