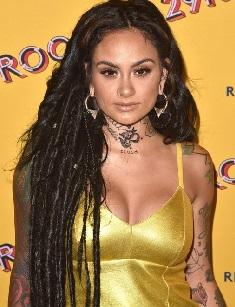 Born in Oakland, Kehlani Ashley Parrish became a well-known singer of Atlanta Records. She released her first and successful mixtape in 2014, and it was recognized as one of the 50 best albums of the year. Started her career in a teen pop band from Oakland, called POPLYFE, the singer has been nominated six times for various awards, two of them were for Grammy. Currently, Kehlani owns her own online clothing shop, and anyone can appear in a suit of her brand.

In 2019 she gave birth to a daughter. According to authoritative sources, this singer has a net worth of $3 million, with her wealth being accumulated from her music career.

Kehlani is a typical representative of a dysfunctional family. She was brought up in Oakland by her aunt. It was a great miracle that she was born healthy on April 24, 1995, in Berkeley (the city in Northern California) in a small apartment. Both her parents had drug addictions.

As a kid, Kehlani stayed without father. Drugs completely destroyed his body, and he died when his little daughter could only crawl. Mother’s drug addiction brought her to prison. Kehlani was adopted by some family during her early childhood but stayed there not for long. After that, her aunt officially adopted her and brought her up in Oakland.

Kehlani’s mom came back to her life when she returned after jail. She had two other kids, who lived with her. But Kehlani had to stay in her aunt’s home, and that made her upset. The aunt of Kehlani also had two children, a boy, and a girl. They were younger than Kehlani. So, she was babysitting her cousins.

In 2002 Oakland School for the Arts (OSA) was opened. It was a visual and performing arts charter school. Kehlani entered it, as she wanted to go dancing. Then-teenager, Kehlani was interested in modern dance and ballet. The young girl wanted to move to NYC and to enroll at the Juilliard School. She was forced to change her future occupation because of unseen circumstances.

Kehlani got a knee injury and switched from dance to her school's vocal department. Her musical references were unusual for a teenager. She was inspired by such neo-soul artists as Jill Scott, Erykah Badu, and Lauryn Hill. Before fame, she joined PopLyfe group and was its member for the next three years.

By the time Kehlani was 17, she was homeless. She discovered who she was. That’s why she is so tatted now. She knows herself enough to recognize that she had been the same person her whole life. Those ideas and thoughts and beliefs were going to be there forever. Currently, she can still look in the mirror like, “I still think like this”.

One of Kehlani’s peers played the piano for a local cover band. Once he invited Kehlani to audition for his dad, who was managing the group titled PopLyfe. It turned out, her peer’s father was D'wayne Wiggins, a founding member of Tony! Toni! Toné!. Kehlani was very scared. It was the first time she really sang out.

Kehlani spent the next three years performing covers of classic soul records in the group alongside Wiggins' sons. They were intensely doing shows, up until they were 16. Then the band auditioned for America's Got Talent and ended up being finalists on the show.

After the end, she returned to Oakland and the group broke up. The next three years, Kehlani went through a lot of growing up, being on the streets, being homeless, moving around, crib to crib. She was just trying to graduate high school. Then Nick Cannon called Kehlani and offered to join the rap group. She agreed and moved to LA.

Kehlani couldn’t realize herself in that group. He stayed in LA for some time but later returned to Oakland, where she wrote her first track. It was 2013. Her debut single was called “ANTISUMMERLUV”. Nick Cannon called her again and understood her willingness to become a solo artist. The novice singer moved to LA again, where Cannon had rented an apartment for her.

Kehlani got wide recognition in 2014, issued her first mixtape. It was called “Cloud 19”. It was highly estimated and became No.28 in the list of the 2014 best albums. The mixtape included such tracks as “FWU”, “As I Am”, “Deserve Better” and others. There were some guest appearances in the album. Kehlani started to work with various record producers. She even was an opening singer of G-Eazy’s tour.

Next year Kehlani issued her second mixtape titled “You Should Be Here”. It received high estimates as her first mixtape and became the fifth on the main chart of the US. Rolling Stone recognized that project the 16th best R&B album of 2015. Chance the Rapper, Lexii Alijai, BJ the Chicago Kid, and Coucheron collaborated with Kehlani. In July the singer embarked on a tour to promote the mixtape. She visited some cities in North America and Europe. “You Should Be Here” was presented at the Grammys 2015.

In 2016 Kehlani was noticed in movies. She recorded the soundtrack for Warner Bros.’s movie Suicide Squad. Her “Gangsta” is still the singer’s career’s best single. It picked at number 41 on the US Billboard Hot 100. Next year, Kehlani was involved into the creation of ninth studio album of Eminem.

They recorded track titled “Nowhere Fast”. It happened thanks to the success of her first studio album, which was released in November 2016. It got the name of “SweetSexySavage”. There were such popular songs as "Keep On", "Hold Me by the Heart", "Advice", and “In My Feelings”.

In her career, Kehlani has managed to work with many big artists. She was the opener of Hasley’s, Demi Lovato’s, Cardi B’s tours. In 2017 the critics described her as one of the bigger draws in her genre on that year’s bill. Kehlani and G-Eazy performed "Good Life" at Coachella 2017.

Also, she gave a concert in Toronto. Later Kehlani performed her single “Honey” live at Billboard’s Women in Music 2017. The official music video was released a few days later, on December 4th. The lyrics of the song contained the following words: “Cause I'm a beautiful wreck / A colorful mess, but I'm funny”.

Next year Christopher Street West, the non-profit organization responsible for putting on the LA Pride Festival each year, announced that Kehlani and Tove Lo would be headlining the annual festival of 2018. In 2019 Oakland native issued her third mixtape “While We Wait”, which consisted of 9 songs. Recorded “Too Deep”, “Morning Glory”, “Nights Like This” and “Love Language” were included to it.

Kehlani was romantically involved with NBA star Kyrie Irving in January 2016. Two months later she was accused of cheating on Irving. The Instagram users saw the post of Canadian musician, where Kehlani’s hand was pictured in his bad.

Kyrie publically reported that he broke up with Kehlani before that post. Kehlani was denied all rumors, saying that she was not a bad person. Two years later, Kyrie apologized to her.

There is no exact information about Kehlani’s sexuality. Many times she declared various facts. She lost her virginity at the age of 17. In April 2018 she posted the next message:

In 2018 Rita Ora premiered her new collaborative single, "Girls," which featured the likes of Cardi B, Bebe Rexha and Charli XCX. While the ladies had billed song, which had an "I Kissed A Girl" flare, as the big hit of 2018, one person was outraged. Kehlani claimed the song had "harmful" lyrics and voiced that she found it to be insensitive to the LGBTQ community.

However, two months later, Kehlani got pregnant. Many fans were scratching their heads, wondering who the singer chose to start a family with. In an exclusive interview on Nicki Minaj’s Queen Radio, Kehlani shared that her partner and soon to be co-parent was Javie Young-White. Adeya Nomi was born in March 2019. Kehlani decided to give birth at her home.

At present, Kehlani has a net worth of $3 million dollars.

Kehlani has issued 24 singles, three mixtapes, and one studio album.