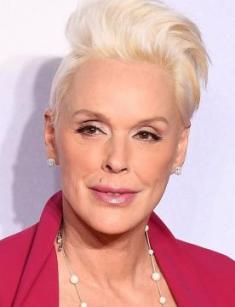 The model Brigitte Nielsen stepped into the world of movies from a runway and debuted as Red Sonja in Richard Fleischer’s fantasy movie under the same title. The actress became even more popular when she married the star Sylvester Stallone in 1985: he was at the peak of his career.

Nielsen’s talents are limitless: she worked on movies, music, and TV projects, as well as led an active personal life and had five husbands and five kids. The youngest child was born when Brigitte was 55; she also came back to cinematography at that period and grabbed the whole world’s attention.

Brigitte Nielsen was born on July 15, 1963, Rødovre, the suburban neighborhood of Copenhagen, Denmark. Her father, Svend Nielsen, worked as an engineer, and the mother, Hanne, was a librarian. The actress has a brother, Jan.

There is little information about the celebrity’s childhood years. The 16-year-old girl left the family house to France: she was going to conquer the fashion industry. It was not difficult for Brigitte with her bright, cold beauty and height (6.07 feet or 185 cm.). Soon, the model signed her first contracts and participated in fashion shows in Paris, Milan, Rome, Madrid, and Berlin.

The gorgeous model collaborated with many masters: Gianfranco Ferré, Giorgio Armani, and Gianni Versace. Besides, Nielsen appeared on Playboy covers in a swimsuit and without it.

One day, the Hollywood producer Dino De Laurentiis saw the Scandinavian diva on a magazine cover, and it dawned upon him: the woman with her severe beauty and athletic body was an ideal candidate to play the main character in his new project, Red Sonja. She would make a splendid partner for Arnold Schwarzenegger who had already accepted the invitation to the movie.

Although the model’s first child, Julian, had just been born, she did not hesitate to leave the son with his father and go to the United States. The movie about the warrior Sonja, who used a sword and a talisman to fight her enemies, failed but stuck in the audience’s memory and made the actress famous.

Nielsen met Sylvester Stallone at a movie party. The actor’s popularity was incredible: the action movie series Rambo: First Blood and Rocky had just been released and enjoyed everybody’s love. Producers were going to create Rocky IV, and the actor helped his wife Brigitte receive one of the lead parts there.

In 1986, Sylvester and Brigitte collaborated in the action Cobra; the Dutch played the model Ingrid who witnessed a cold-blood murder and became the criminals’ target. The police officer nicknamed Cobra (Stallone) saved her.

The artist decided to fill the gap with music. In 1987, she presented the debuting album Every Body Tells a Story with the duet song with the Austrian pop singer Falco; the disc was popular in Germany and Austria. The next album, I Am the One Nobody Else, came out in 1991, but it did not enjoy much attention. Brigitte was working at the Italian television, participated in the show Festival, and hosted music events including the Sanremo Music Festival.

In 2000-2001, the singer took the stage name Gitta and released two dance albums No More Turning Back and Everybody’s Turning Back; further on, she stopped her musical activities. Besides, another stage of her life – reality shows – began.

In the late 1990s-2010, Nielsen appeared in numerous programs in Denmark, Italy, Germany, Great Britain, and the United States. The Surreal Life was one of the most successful shows; Brigitte flirted with the rapper Flavor Flav there. In January 2005, the woman participated in the British program Celebrity Big Brother with her former mother-in-law, Jackie Stallone. Brigitte took the third place after the viewers’ voting.

In 2008, Brigitte took a desperate step: she agreed to participate in the project to improve her appearance. The actress had six surgeries; the overall cost was € 66 000. The surgery and recovery process were aired. Besides, Nielsen worked on the program about alcoholism and drug abuse; she shared her experience of rehabilitation in 2007 in Pasadena.

In 20009, the model published the autobiography You Only Get One Life; she described the events of her stormy youth. The book was among the top five bestsellers in Denmark; it was released in Great Britain in 2011.

Since 2011, the actress’s career has been improving. She appeared in the comedy horror Eldorado with Daryl Hannah, David Carradine, and Kerry Washington. Two years later, Nielsen expanded her filmography with Mercenaries (2014) starring Cynthia Rothrock, Vivica A. Fox, and Kristanna Loken. She personified one of the inmates who were promised a pardon in exchange for their contribution to a dangerous operation.

In 2017, Brigette joined the cast of the series Gods and Secrets.

The composer and musician Kasper Winding was the model’s first husband in 1983; their son Julian was born the next year. However, Brigitte’s new love destroyed the union: the actress fell in love with Sylvester Stallone.

The lovers married in 1985, and every minute from that moment was full of scandals: the spouses were accusing each other of cheating, and the media’s speculations about Brigette’s romance with the director Tony Scott made things even worse. When both actors were exhausted with this lifestyle, they broke up; they had no kids together.

The actress started a new relationship the next year; the soccer player Mark Gastineau was her new lover. The fact that the athlete was married and had a little daughter did not stop the actress. The passionate affair led to a new pregnancy; the TV diva gave birth to the son Killian in 1989.

By that moment, the couple had already broken up, and Nielsen got another love interest: Orlando Bloom’s cousin, the photographer and director Sebastian Copeland. They married in 1990 and spent two years together; no children were born in this union.

The next marriage happened in 1993: the race driver and Ayrton Senna’s friend Raoul Meyer became the blonde’s new husband. It was the celebrity’s longest partnership. Raoul and Brigitte divorced in 2005, but they had actually separated earlier: according to the actress, Meyer’s despotic nature caused that. The sons, Douglas Aaron and Raoul, Jr., stayed with their mother.

The woman was depressed after the divorce; the situation got even worse when little Raoul was diagnosed with brain cancer. Nielsen was desperate; she began to abuse alcohol, and only clinical treatment helped her overcome her dependence.

“Booze turned me into a bad mum, an ugly, depressed woman, and a complete loser. I looked in the mirror and realized I’d reached rock bottom”, the artist confessed in one of her interviews.

At that moment, the celebrity met the bartender Mattia Dessì; he became her fifth husband in 2006. Brigitte wanted to give her young spouse a child, but in vitro fertilization did not bring any results for a long time. In 2018, the miracle happened: the 55-year-old actress gave birth to a girl. The happy parents named her Frida.

Despite the challenging pregnancy and difficult childbirth, Nielsen did not quit cinematography. In 2018, she came back to the story about Rocky Balboa in the action Creed II.

Brigitte personified old Ludmilla Drago who supported her son, Viktor, in the ring; the young man could not forgive his mother for leaving him as a child. The premiere of the movie took place in 2018.