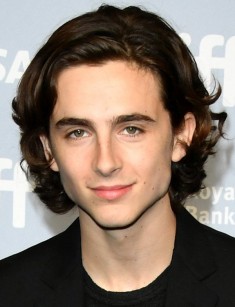 Timothée Chalamet went down in the history of the American movie industry at least because since the beginning of the 20th century he became the youngest actor nominated for Academic Awards. At the 90th ceremony, he competed with such eminent actors as Gary Oldman, Daniel Day-Lewis, and Denzel Washington.

Timothée was born in the family which was closely related to art and show-business. His mother Nicole Flender was a dancer in New York ballet on Broadway. His father Mark was an interpreter and editor at UNICEF. His grandfather Harold was an author and a screenwriter, he wrote four scripts for the movies.

His uncle Rodman Flender is an actor and producer. Among his relatives is Amy Lippman, a famous person at American television. And, finally, his elder sister Pauline is an actress and she lives in Paris – in their father’s homeland.

In 2013 Chalamet graduated from the LaGuardia College of Fine Arts and entered the Columbia University, where he studied only for a year. Later he became the student of Gallatin School of Individualized Study at New York University.

Timothée filmed in commercials and short movies since he was a boy. He received a more significant role in the popular police series "Law & Order", then came one more long-lasting movie "Royal Pains".

The thriller "Homeland", nominated for Emmy and Golden Globe Awards, is considered to be a real debut of Chalamet. Tim appeared in an episode of the second season as a character of Finn Walden.

The young actor received a more extended script when he accepted Christopher Nolan’s invitation to play in science-fiction movie "Interstellar". Timothée presented the role of the son of the major character, performed by Matthew McConaughey. Here Chalamet got acquainted with Anne Hathaway, Matt Damon, and Michael Caine. This movie got Academic Awards and was awarded by BAFTA and Saturn Awards for visual effects. The gross from this movie was seven times more than the budget spent on it. Since then Matthew McConaughey and Timothée became friends.

Then actor enriched his filmography with the role of the main character in the movie "The Adderall Diaries", with the character of Charlie in the comedy "Love the Coopers" and a small role in the drama about the impact of the internet under the title "Men, Women & Children".

In 2016 the scriptwriter Julia Hart directed a new movie "Miss Stevens". In this movie, Timothée played the part of Billy Mitman. This picture didn’t impress the audience much.

The rising star prefers to ignore questions about his private life. When Timothée was 17, he got acquainted with Madonna’s eldest daughter Lourdes Leon. Paparazzi found out that celebrity let her daughter go on dates only in a company of her bodyguard. The couple broke up but they stayed friends.

The young actor was noticed by fashion designers. He changed his jeans and sweaters for outfits from Gucci, Prada and и Calvin Klein. Corresponding photos immediately appeared at the covers of glossy magazines.

What about his musical choices, Timothée prefers rap music. His fans found a funny video with him from school times on the web. At this video, the actor was performing a song, which he prepared as a home task. He left his musical experiences in the past and gave up composing.

The actor is indifferent to social networks, "likes" and reposts. That's why he doesn't pamper his fans with regular updates on Twitter and Instagram like other celebrities. What about expressing his own ideas, Timothée is rather old-fashioned and writes a diary.

It's possible that the actor could have been a totally average artist, but the fate stepped in his further biography and career. Exactly, it was his lucky acquaintance with Luca Guadagnino. The director saw a vivid, intelligent, ambitious young man who was not narcissistic. Luca decided that he would work on the project "Call Me By Your Name" and he even didn't organize auditions, as he already found the actor for the major role of Elio.

The character of Chalamet was brought up in the intelligent family of the professor and interpreter. He fell in love with the assistant of Oliver's father, but the circumstances destroyed their romantic relationship. Armie Hammer played the role of Oliver ("Mirror Mirror", "Cars 3"). Timothée learned the Italian language for this role, moreover, he studied to play the piano and guitar; he already knew French due to his previous holidays in the native country of his father - in France. Tim and Hammer became good friends. Young men are joking about the lovely couple, which they had to act on the movie set.

Movie critics admired their talented acting. Chalamet received prestigious Gotham Independent Film Awards, he was nominated for Golden Globe Awards and for Academic Awards for the first time. Also, this movie was among the candidates in nominations for Best Original Song, Best Adapted Screenplay, and Best Picture.

The audience gave a standing ovation to the heroes of gay-drama at the festivals in Sundance, London, Berlin, Toronto. Overwhelmed by this success, Luca Guadagnino thought about filming a sequel.

Timothée played his next significant role in the romantic comedy "Lady Bird". This time the guy turned into a teenager Kyle, the pupil of the school. Even though it was difficult due to his high height - 182 cm. The movie awarded two Golden Globes - as a film in a comedy genre or musical for Best Actor in the Supporting Role. Moreover, it was nominated for Academic Awards.

In 2017 actor was invited to the cast of the western "Hostiles". According to the plot of this movie, the main character accompanies the dying Indian Chief of the Cheyenne tribe to the prairies in Montana. On their way, they have to confront the resistance of the Comanche and defend the young widow, whose family was killed by the Indians.

Beyond this, Chalamet exposed himself in drama "Beautiful Boy", produced by Brad Pitt, about a young drug addict and also in Woody Allen’s project "A Rainy Day in New York". The latter was not of much success for Timothée because the sexual harassment scandal broke out in Hollywood. Woody Allen was accused of sexual harassment too. The actor couldn’t give up the shooting cause he had already signed the contract. Though he managed his retainer symbolically and transferred the money to the Victims of Violence Support Fund "Time's Up" and to Organization against Sexual Harassment. 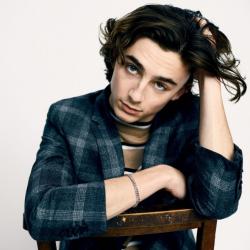