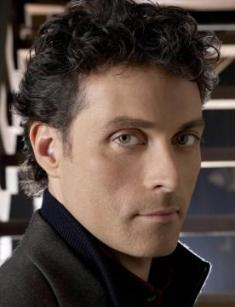 Rufus Sewell is an English stage and screen actor who has gained worldwide fame after starring in the thriller Dark City, The Legend of Zorro, and the mystical drama The Illusionist.

Rufus Frederik Sewell was born in Middlesex, England, in October 1967. The boy spent his childhood in the town of Twickenham, but it was not cloudless. His life did not change when the family moved to Richmond when Rufus was not even ten years old. Rufus has an elder brother, Caspar. Their father, an animation artist, left the family after moving to Richmond.

The mother had to raise her sons. The woman had several jobs, and she did not have enough time to bring up the children. Rufus later said in an interview that he dyed his hair every color of the rainbow; he did not sleep at home and missed school.

The situation got even worse when Rufus Sewell's father suddenly died. No one could stop the youngest son, who turned into a real bully. Fortunately, the young reveler understood that it was time to sow his wild oats. Rufus learned to play percussion instruments and began making extra money.

At the age of 19, Sewell managed to enter the prestigious Central School of Speech and Drama in London, where the young man studied for three years. Rufus found part-time jobs to make for a living. Sewell worked as a garbage collector and museum attendant.

Fortunately, Judi Dench paid her attention to Sewell. The famous English actress staged a performance at the school where Rufus studied. Dench did the talented young man a favor, and soon the beginning actor made his debut in the play Dirty Dinner on the stage of the Sheppard Theater.

The debut was successful because Sewell received the Critics' Circle Awards as an Outstanding Newcomer. It helped Rufus to make it into the world of performing art. The English actor was offered to participate in a Broadway play. For this work, Sewell received the next prestigious award in the USA.

Rufus Sewell began an acting career in 1991. After the first successful steps on the stage, the actor began to appear on the screen. A prominent role went to Sewell in the American drama Twenty-One. The English actor played a young drug-addicted man. They paid attention to the actor and began to invite him to various TV series.

Although the work in soap operas did not make Sewell famous, it was an excellent acting experience, turning Rufus into a recognizable actor. During the first decade of his career, the artist’s filmography included such full-length movies as the drama Carrington with Emma Thompson in the title role, the film adaptation of Hamlet, in which Kenneth Branagh and Kate Winslet appeared. Later, Sewell became associated with a part of a tragic hero.

Rufus Sewell became successful in 1998 after the release of the noir thriller Dark City. For the first time, the English artist played a key role. Rufus’s hero John Murdoch struggles with aliens.

The same year, the actor appeared in the drama Dangerous Beauty as Venetian Marco Venier, who lived in the 16th century and was the beloved man of the title character, Veronica Franco (Catherine McCormack), who had to become a courtesan.

After two years, Rufus played on the same set with such Hollywood stars as Kim Basinger. It was the melodrama Bless the Child. The film talked about the Satanic sect, which began hunting the child of the heroine, Maggie.

Then the adventure melodrama A Knight's Tale was released, in which Sewell appeared as a medieval hero, Count Adhemar. To participate in the film, the artist mastered the technique of spear fighting because his hero is the champion in this art. In the action movie Extreme Ops, the artist appeared as an athlete who was forced to confront a gang of terrorists with his comrades.

In 2003, the actor was offered to play the role of Agamemnon in the American television series Helen of Troy, starring Sienna Guillory. In the story, which diverges from the ancient Greek myth, the hero of Rufus Sewell strives to marry beautiful Helen. However, by lot, the girl has to marry his brother Menelaus (James Callis), who does not enjoy family happiness for long, as his wife escapes with the Trojan heir, Paris. The same year, Rufus Sewell portrayed another historical character, Charles II, in Joe Wright’s mini-series Charles II: The Power and the Passion.

The highly-rated TV series Middlemarch made Sewell a real star. But work in the film industry did not force the actor to leave the theatrical stage. Rufus has played in productions and was even awarded the prestigious Olivier Award. No less important project was the role in the mystical drama The Illusionist, in which Sewell appeared as Crown Prince Leopold, whose bride, Sophie (Jessica Biel), was the beloved woman of the young title character, illusionist Eduard Abramovich (Edward Norton). The lovers disappear during one of the magician’s tricks.

The filmography of Rufus Sewell also includes the roles in the historical movie Amazing Grace, the drama Tristan and Isolde, the anthology movie Paris, je t'aime.

In Russia, Rufus Sewell is known for his role in the melodrama The Holiday, which also starred Kate Winslet, Cameron Diaz, and Jude Law, as well as the movie The Tourist, in which he appeared together with Angelina Jolie and Johnny Depp. The recent projects of Rufus Sewell include the roles of Autolycus in the action movie Hercules and Jacob Brown in the thriller The Devil's Hand.

The movie and theatre career is much better than the private life of Rufus Sewell. The actor's first wife was Austrian journalist Yasmin Abdallah. But the couple could live together even for a year.

Then the press discussed the short love affairs of the English actor with Helen McCrory and Kate Winslet.

When Rufus met beautiful Amy Gardner, many people thought that Sewell had finally found the real soul mate with whom he could live happily ever after. The couple had a child, who was named William Douglas Sewell. But this marriage collapsed in 2006. Amy and Rufus lived together for only two years.

Rufus Sewell continues to build his acting career. In 2016, the artist starred in the highly-rated fantasy movie Gods of Egypt, in which he played the court architect, Urshu. Sewell appeared together with Hollywood stars: Gerard Butler, Geoffrey Rush, Élodie Yung.

The same year, Rufus began to create the image of Lord Melbourne in the TV series Victoria, telling about the first years of the reign of the British Queen. The television series aired for two seasons on British television. In 2017, the broadcast rights were bought by the American television channel PBS. The ratings of the series were high in the UK, so it was decided to release the third season, which is scheduled to premiere in 2018.

Rufus Sewell is now starring in another significant project, the drama film Paradise Lost, about the struggle of the Archangel Michael and Lucifer. The release date of the film has not been announced yet, but it is known that Benjamin Walker, Bradley Cooper, Dominic Purcell will play the title characters.