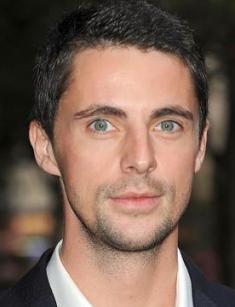 The actor with a speaking surname Matthew Goode has long been attracted by fans of movies and TV series because he played in such remarkable works as Stoker, The Imitation Game, The Good Wife, Downton Abbey, and other popular productions.

On April 3, 1978, Matthew Goode was born in Devon, southwest England. His childhood took place in the city of Exeter, where beautiful historical sights are located: the bishop's palace, the cathedral, as well as a rich library and statues. Therefore, as a child, Matthew often watched narrow streets, cultural monuments, towers with gothic spires, and much more.

The future actor grew up in an ordinary large family. His father worked as a geologist, and his mother, Jennifer, worked as a nurse and at the same time, was a director of amateur theater. The family also brought up his brother and two half-brothers besides Matthew. He also has a sister Sally Meen from the previous marriage of his mother. She is a famous American journalist and TV hostess. It is known that Goode tended to acting from an early age. He was a patron of school productions and played in improvised scenes.

The directors couldn't miss the handsome (Matthew's height is 6'2'' or 1.87 m) guy with blue eyes, so it's no wonder that Goode got on the TV screens and showed himself as a professional actor. For example, in the movie Stoker (2012), where the young man starred opposite

Mia Wasikowska, he transformed into a mysterious man whose passions cause anger and fear. And in the movie Burning Man (2011), he appeared in the image of a successful chef Tom, whose life after an accident would not come back to its course.

Matthew made his debut in the television movie Confessions of an Ugly Stepsister (2002), but the unremarkable role of the actor did not bring fame and general recognition. But it didn't take long to wait, because after two years Goode appeared in Andy Cadiff's comedy Chasing Liberty, where he played a charming motorcyclist Ben Calder, in love with a troubled girl. And she is not simple in the fact that she is the daughter of the President of the United States, whom the influential father protects like a treasure from pesky fans and noisy parties. The cast of this movie included Mandy Moore, Jeremy Piven, Mark Harmon, and other movie stars.

After the great success of Matthew Goode in the movie Chasing Liberty, the proposals from the famous directors fell one after another. Thus, the young man almost every year appeared on the set, delighting the avid movie-goers with diverse characters. In 2005, Matthew Goode participated in Woody Allen's sports thriller Match Point, where he was lucky to work with actors Jonathan Rhys Meyers and Scarlett Johansson.

In 2005 Goode was also featured in Ol Parker's movie Imagine Me & You. The plot of the movie revolves around Rachel (played by Piper Perabo) and Heck (Matthew Goode). However, on the day of their wedding, the young girl begins to doubt the correctness of her choice of a partner for further life. In 2006, Matthew proved that he could play not only in romantic comedies. The actor starred in Agnieszka Holland's biographic movie Copying Beethoven, which tells of the ups and downs in the life of the great composer.

Then Matthew, along with Joseph Gordon-Levitt and Jeff Daniels plays in Scott's crime thriller The Lookout (2006). Goode appeared to viewers in the image of Gary - a resourceful bandit, who convinces his friend to cross the line of the law and participate in the bank robbery. Matthew's work in the movie Brideshead Revisited (2008) once again emphasizes the diversity and professionalism of the actor. This picture tells of jealousy, love, family differences, and reveals the secrets of an unknown future and imaginary past.

Goode played Charles Ryder, a middle-class artist who dreams of becoming a famous artist like Rembrandt or Picasso. Going to study in Oxford, Charlie meets a homosexual and wealthy aristocrat Sebastian (Ben Whishaw), and settles at the Flyte's residence. The guys make strong friendships, but their mutual idyll is spoiled by Julia (Hayley Atwell), who charms Ryder.

In 2008, Goode was lucky enough to transform into a superhero in Zack Snyder's movie Watchmen, which tells of events in the alternative universe, where the height of the Cold War between America and the Soviet Union takes place. Matthew Goode played Adrian Veidt, an ambitious millionaire, recognized as the most intelligent man on Earth, who was ready to invest in useful resources, but for the sake of wealth, he was also ready to kill. In 2009, Goode again pleased fans, this time appearing in Tom Ford's melodrama A Single Man, where he played alongside Colin Fert, Nicholas Hoult, and Julianne Moore.

From 2014 to 2015, the actor was involved in the popular British television series Downton Abbey, which tells about the events of the early 20th century in England. In this multi-part film, Matthew Goode performs the role of Henry Talbot, a close friend of Lady Violet. Henry Talbot is an ambitious young man, but unfortunately, he has no hope for the future, as he is not rich enough. This pushes away his beloved, smug Mary Crawley. That's why Matthew Goode's character has to plunge into love's twists and turns.

Admirers of the guy long argued about his preferences, because the actor often performed the role of young people with non-traditional sexual orientation. But Matthew Goode dispelled all the rumors and suggestions about being gay. In 2007, he proposed to Sophie Dymoke, who worked for a fashion company. The girlfriend said yes and became his wife.

In 2009, the lovers had a daughter, Matilda Eva, four years later, a second girl, Teddie Eleanor Rose, and in 2015, she gave birth to her son, Ralph. Unfortunately, Matthew Goode does not use Instagram or Facebook and does not please fans with happy family photos surrounded by children and a loving wife.

In 2016, Matthew took part in the shooting of the mini-series Roots and also appeared in the movie Allied, starring Brad Pitt and Marion Cotillard.

Matthew Goode has a net worth of $3 million.