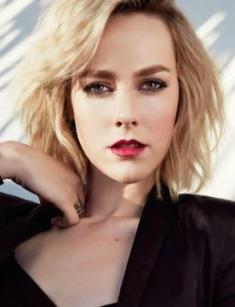 Jena Malone is an American actress who began to play in her childhood. The audience knows her for Lovesong, Bastard Out of Carolina, and Stepmom; the blockbuster The Hunger Games: Catching Fire is her most popular project.

The would-be star was born in 1984 in Nevada. She spent her first years in Sparks and then started moving frequently: throughout nine years, the kid changed 27 cities and finally settled in Los Angeles.

The girl grew up with a single parent. The mother had to bring up Jena and her half-sister Madison alone; a friend helped her. Malone began to earn money at the age of seven: she participated in an episode of the melodrama series Roseanne. From that time, the child actress always received numerous offers.

Jena’s career was developing fast. She participated in several episodes and then got an invitation to the blockbuster Bastard Out of Carolina; the girl was 12. The project was a remarkable success and grossed much; Malone’s earnings were substantial. She also benefited from the sci-fi drama Contact (1997).

The drama Stepmom brought the lead role; Jena collaborated with Julia Roberts, Susan Sarandon, and Ed Harris. It is the story about a terminally ill mother who has to find a common language with her ex-husband’s new partner for the sake of her kids. The movie was pretty popular and brought $159 million. The young actress got $325 000.

15-year-old Jena had to go through the judicial proceedings: the young woman sued her mother who wasted her money. The judges supported the teenager, and Malone was given the right to manage her earnings independently. Later, the daughter and the mother made amends.

Successful projects followed one another. In 2001, the audience enjoyed the artist’s talent in Donnie Darko, where she personified the main character’s friend. At that period, the actress played teenagers: Alyssa Beck in Life as a House and Margie Flynn in The Dangerous Lives of Altar Boys. Further on, she started working on adult characters: American Girl and the comedy Saved! The former project was also marked with Jena’s first experience as a producer.

2003 was quite interesting for Malone: she participated in the psychological drama The United States of Leland and the war series Hitler: The Rise of Evil. The artist’s characters were ambiguous: a drug abuser and Hitler’s niece Geli Raubal. In the civil-war drama Cold Mountain, Malone had a secondary role and collaborated with Jude Law, Nicole Kidman, and Renée Zellweger.

In 2006, Sean Penn offered the woman to play Carine McCandless in Into the Wild; besides, Jena was the narrator there. The project was incredibly popular and gave Malone several prestigious prizes and nominations; critics emphasized the actress’s improved skills. The same year, Jena debuted on Broadway and played the lead part in Doubt. The following projects, such as the horror The Ruins, the war drama The Messenger, and the fantasy thriller Sucker Punch, strengthened her position as a Hollywood celebrity.

The international recognition came with the movie The Hunger Games: Catching Fire. Malone had to perform complicated tricks and even learn some martial arts; movie experts appreciated her work. The actress also starred in the next parts of the franchise, The Hunger Games: Mockingjay – Part 1 and Part 2. At the same time, Jena personified a woman living in the early 20th century in Matt Wolf’s documentary Teenage.

The psychological horror The Neon Demon stands out among the artist’s recent works. The movie was included in the Cannes Film Festival contest program. Jena played a makeup artist Ruby who had some mental issues; Elle Fanning and Keanu Reeves got the lead parts. The thriller Nocturnal Animals gave the actress a secondary role.

The celebrity’s personal life has been happy: the music producer and photographer Ethan DeLorenzo is her common-law partner. In 2016, Jena Malone gave birth to her first child, Ode Mountain DeLorenzo Malone.

The woman shared the news on her social networks and attached the first family photo with the baby.

Today, the actress is taking care of her son and continues to play in movies. In 2017, the thriller Bottom of the World with Jena Malone was released. It is the story about two travelers who find themselves in a motel with no customers. The same year, the filming of the movie The Public was finished. As the story runs, one can see the nightlife in a public library: those who have no shelter or mentally ill tramps visit it.

In summer 2019, the series Too Old to Die Young with Miles Teller and William Baldwin will be premiered. Besides, the actress signed contracts to participate in the drama Things You Missed While You Were Gone and the melodrama A Moment to Remember starring Josh Hartnett.