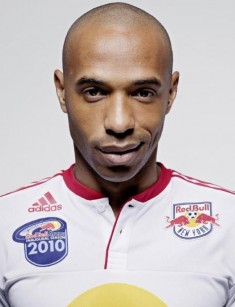 Thierry Henry is called the soccer miracle in France, England, and Spain. Even Americans appreciate his achievements, although soccer is not as popular in the United States as it is in Europe. The list of the player’s accomplishments includes dozens of items; Henry has many records and prizes. The only thing that can upset the sportsman is that he has no Ballon d'Or.

Thierry Daniel was born in Les Ulis near Paris in August 1977. Henry is Antillean: the father, Antoine, came from Guadeloupe, and the mother, Maryse, was from Martinique.

The father supported the son’s interest in soccer: he controlled his regime and took him to various clubs. The boy’s inborn foot defect, the parents’ divorce in 1985, the elder brother’s mockery – nothing could stop little Thierry.

Once, Antoine got fired because he was late for work: he was driving Thierry for practice. As Henry’s first coach Claude Chezelle mentioned, the boy’s imperfection paled into insignificance when one saw Henry Sr.’s ambition and persistence: the father could conflict with judges or other children’s parents if he believed his son was offended.

The young man played in the junior teams of Les Ulis, Palaiseau, and Viry-Chatillon. Eventually, Thierry joined the elite soccer center in Clairefontaine. During one match, the manager of Monaco Arnold Catalano noticed the player who scored six goals and invited him to the reserve team.

At the age of 17, Thierry joined the first eleven of Monaco. The head coach of the team, Arsène Wenger, became the most important person in Henry’s career development: he found the right field position for the young talent and made the midfielder a forward. Thierry Henry spent five seasons in Monaco, led the team to the victory in the France Ligue 1, won the Coupe de la Ligue, and reached the semi-final of the Champions League by defeating Manchester United headed by Alex Ferguson.

In 1997, Henry sidestepped his club and signed the contract with Real Madrid. The new club promised $40 000 as the monthly salary and $1 million for the adaptation period. However, Real did not know the agreement with Monaco was going to expire only the next year.

Naturally, the deal was off; FIFA fined the daredevil. Thierry spent a season in Juventus, but the things were not going well: Marcello Lippi made Henry a midfielder again. The sportsman did not feel comfortable and scored only three goals in 19 matches. The Italians did not regret to set the unpromising, as they thought, player to Arsenal for £10 million. Wenger joined the club in the same period.

Before going to England, Thierry received the Legion of Honor for the victory at the FIFA World Cup in France and the top-scoring results in his national team at this championship.

London Arsenal pertains to the athlete’s career peak. Thanks to Wenger, Henry became the key figure of the team, and other players were to support his playing. Thierry scored 226 goals for the club and became its best scorer. In the 2003-2004 season, the club had no losses; it became the best team of the English Premier League from the moment of its foundation. To honor Thierry’s contribution, Arsenal erected a monument to the sportsman near the home stadium; it was nicknamed “The King.” The monument is twice as tall as Henry himself. The forward’s height is 188 cm., and his weight is 83 kg.

As the player confessed in his interview, the decision to leave Arsenal was the most difficult choice in his life; it was also the greatest loss for him. Thierry had to leave because of David Dein’s departure, the coach’s hesitation, and the overall uncertainty about the future. Some people believed Henry was looking forward to new trophies in Spain.

To some extent, this theory was true. The player covered his cost, € 24 million, and brought wonderful results. Three seasons in Barcelona were marked with two La Liga, the UEFA Champions League, Copa del Rey, and Supercopa de España victories. Besides, Henry helped the France national team win the UEFA European Championship and the silver medal at the FIFA World Cup 2006. However, he did not get Ballon d'Or – Zinedine Zidane did.

During the qualifying matches in 2010, Thierry repeated Diego Maradona’s “achievement” – the Argentinian was “blessed” in 1986 when he played with his arm. Henry also used his arm in the game against Ireland and gave France the chance to reach the final.

One of the best modern soccer players finished his career beyond the ocean: in 2010-2014, Henry played for New York Red Bulls in Major League Soccer (the USA and Canada). The forward kept his number 14 that he used to have in Europe.

Thierry has two children. The player’s ex-wife, the model Nicole (Claire) Merry, became the mother of the elder kid, Téa. The couple divorced in 2007. Rumors had it the forward liked to party with women. Paul McCartney’s lawyer protected Nicole’s interests; Henry turned to the company that had represented Princess Diana.

In October 2008, Henry met a beauty Andrea Rajacic in Spain. Four years later, the son Tristan was born; the man had a tattoo to remember this event. However, the couple did not marry officially. Henry keeps his personal life private. The sports star’s Instagram and Facebook pages pertain to soccer only.

Henry likes music. It used to help him set the necessary mood before a match and relax after a game. Tupac Shakur, Dr. Dre, Snoop Dogg, and Wu-Tang Clan are his favorite musicians.

In the United States, Thierry took an interest in basketball and made friends with the San Antonio Spurs point guard Tony Parker. Henry used to live in the house where Nicole Kidman, Heath Ledger, and Courtney Love used to live.

In 2006, converted to Islam. As the athlete said, he did that thanks to his teammates Franck Ribéry’s and Éric Abidal’s influence.

The famous French sports observer Philippe Auclair who was writing for France Football began to write a book about Henry when Thierry played for Barcelona. Thierry Henry: Lonely at the Top is not only the story of the great soccer player’s life and development – the author ponders what motivated the sportsman and people around him to act the way they did.

Thierry Henry’s talent is not wasted. Before the man finished his career in New York Red Bulls, the French received an attractive offer from the sports channels group Sky Sports: the former player could be the company expert for six years and receive the highest salary for this position in the world: £ 4 million.

Besides, Henry got the license and joined the coaching staff of Arsenal after Wenger’s invitation. Soon, he made Thierry choose between soccer and television. The former athlete preferred television. In comparison, Roberto Martínez from the Belgium national team did not give any ultimatums. Henry donates € 50 000 he receives from the national team for fighting HIV/AIDS and genetic diseases.

After the 2017-2018 season, Wenger resigned; Arsenal considered Henry as the candidate for the position of the head coach; Patrick Vieira and Massimiliano Allegri could also be chosen. The year before, Henry had the chance to become the coach of the Wales national team. In both cases, the French did not succeed.

Guy Ritchie, the creator of the blockbuster Lock, Stock, and Two Smoking Barrels, presented an exciting video for the FIFA World Cup 2018. Thierry Henry, Serena Williams, and Fyodor Smolov appeared in the video. 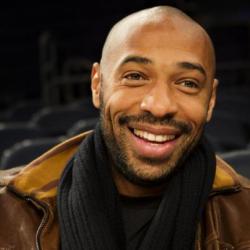