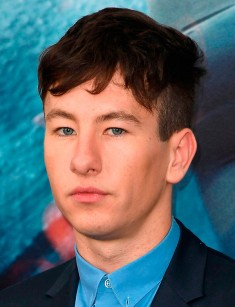 Movie fans hardly know the name of young actor Barry Keoghan. However, the young man has recently been called the rising Hollywood star and in 2017 won the Dublin Film Critics' Circle Award along with the recognized celebrities Natalie Portman, Christopher Nolan, Isabelle Huppert.

Journalists have yet to find out the details of the actor’s biography. It is known that Barry is an Irishman, born in Dublin in October 1992. The boy's childhood was very tough. There is no information about a father, and his mother died from a drug overdose.

By the age of 12, the child was raised in different foster families until his grandmother finally took him. The actor speaks kind words about his close relative, calling her a strong woman who does not allow him to relax. The grandmother encouraged the sports interests of her grandson; the boy was especially fond of boxing, which he likes till the present day. Besides, Barry loved drawing and doing craftwork.

Keoghan made a movie debut quite early. At the age of 17, he found out about the filming of the movie Between the Canals. He called there not to be on TV, but to earn some extra money. However, the guy was lucky because the director answered the call and told him about the film.

Between the Canals is a drama film about the attempts of the former drug dealer to start a new life. But the title character is a member of the gang, which does not understand his aspirations and also hampers his choice of life every possible way. Barry portrayed one of the gang members. The experience of participating in school plays helped the young man. The film was released in 2011.

A year later, the actor played a leading role in the psychological thriller Stalker with Peter Coonan. Barry met this actor on the set of the drama King of the Travellers in which the hero investigated the murder of his father. Keoghan played a bit part.

The next film Life's a Breeze turned out to be completely different. It is a comedy telling about the search of a mattress in which an elderly lady hid money savings.

At the same time, Barry portrayed Sean Meehan in a collaborative work of Canadian and Irish filmmakers called Stay. Aidan Quinn (The Eclipse, Legends of the Fall), Taylor Schilling (Argo) also took part in the creation of the melodrama.

Keoghan met Peter Coonan again on the set of the series Love/Hate. The crime drama has aired for five seasons. Then it was followed by secondary and bit roles in the movies and short films North, Norfolk, The Break, Traders. The actor also starred in the project '71 about the events in Northern Ireland - the conflict between Catholics and Protestants in Belfast.

The crime thriller Trespass Against Us, filmed by Adam Smith, turned out to be not just a story about the hijacker, but the generation gap between parents and children. The talented Irishman managed to be on a level with such famous actors as Michael Fassbender (Hunger, The Snowman), Lyndsey Marshal (Agatha Christie's Poirot, Midsomer Murders) and Brendan Gleeson (The Raven, Edge of Tomorrow).

Keoghan got the leading role of a homeless guy in Rebecca Daly's film Mammal. The movie starred Rachel Griffiths (Blow, Muriel’s Wedding), Michael McElhatton (Game of Thrones). The film clearly showed the feature of the Irish cinema – narrative style combined with reticence. Barry was even called a dream of scriptwriters who wanted to convey the plot through the silence of the characters.

Barry lives in the suburbs of Dublin. His relatives do not consider the actor to be a star, and he does not want to change their attitude. People do not usually recognize Keoghan on the streets of his native city.

The grandmother helps him to work on the screen stories, and the actor spends only 2-3 hours a day studying a role. He has already learned to take it easy on the set. Keoghan does not hide that he wants to cooperate with directors who shoot unusual movies, make something new and non-standard. He dreams of playing the role of Robin in a fantasy film about Batman.

According to the photos on Instagram, the actor’s girlfriend is a pretty blonde named Shona.

The Irishman loves to meet new people. Barry has said that he does not feel awkward or have a lack of professionalism filming with the recognized stars. Moreover, Colin Farrell took care of his young colleague in a friendly way on the set of The Killing of a Sacred Deer. Nicole Kidman struck people with a sympathetic attitude toward inexperienced actors.

If it were not for the cinema, the artist would probably prefer professional boxing. Barry is also the Ambassador of Dior.

The actor made a noise in the world after the release of the projects Dunkirk and The Killing of a Sacred Deer.

Dunkirk is a war drama based on the events of the Second World War. It tells about the evacuation of 300 thousand soldiers from the entrapment. Barry praised not only the special effects used in the filming but also real Spitfire aircraft. The young Irishman played together with Kenneth Branagh, Tom Hardy, Cillian Murphy. Oscar Winner Michael Caine was cast in a spoken cameo role in the film.

The film has already received awards of numerous American and British Academies. The American Film Institute has included the film in the top ten films of the year. Barry won the award for Breakthrough Artist of the Year.

In the detective thriller The Killing of a Sacred Deer, Barry Keoghan adopted practices of the recognized Hollywood stars: Nicole Kidman, Alicia Silverstone, and Colin Farrell. The collaborative work of American, British and Irish filmmakers competed in the main competition section at the Cannes Film Festival in 2017, where it won the Best Screenplay award.

Keoghan played the role of a teenage boy, who was sheltered by the family of a cardiothoracic surgeon. However, Martin was not an ordinary boy, but the son of a man who died during surgery. Unfortunately, this doctor was Farrell’s hero. So, Martin has grown up and wanted to take revenge.

The crime drama American Animals featuring Barry Keoghan premiered at the Sundance film festival in January 2018. The film is based on the true story of a library heist that happened at Transylvania University.