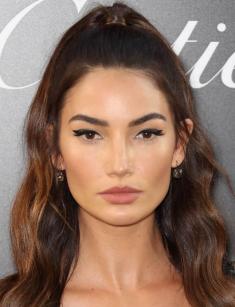 Although Lily Aldridge is not tall for modeling (her height is .74 ft. or 175 cm., and her weight is 114.64 lbs. or 52 kg.), the woman has entered the industry and joined the “angels’ legion” of Victoria's Secret. Today, Aldridge is a muse for many prestigious fashion houses and glossy magazines, and her life is full of exciting projects and events.

The would-be model was born on November 15, 1985, in Los Angeles. The girl’s family was artistic: the father, Alan Aldridge, was a popular artist of the British origin, and the mother, Laura Lyons, worked as an American model. Lily grew up in a loving atmosphere. She had two sisters, Ruby and Saffron, who also devoted their lives to modeling, and a brother, Miles, who became a famous photographer.

The young beauty promised to be a success from an early age: she looked pretty, and her body was slim. When Lily was 15, she was invited to a photo session; the young woman realized that she would like to pose in front of cameras professionally. Alan and Lara supported their daughter’s choice; thus, Aldridge started her modeling career.

Thanks to her family’s professional background, 16-year-old Lily easily stepped into the world of modeling. Aldridge debuted as a static photo model: Abercrombie & Fitch, GAP, Tommy Hilfiger, Charles David, Levi’s, Bobbi Brown, and J. Brand collaborated with the beginning model and used her pictures in their commercials.

In 2003, 17-year-old Lily was lucky to receive the invitation to Vogue Spain: she appeared on the magazine cover. Although other models began to conquer the fashion industry earlier, at 14-15, Lily succeeded despite her relatively late start.

2009 was marked with the career breakthrough: the lingerie brand Victoria's Secret noticed the model and invited her for a trial photo session. The company representatives loved the photos as well as the woman’s sizes and magnetic charm. The next year, Lily signed a contract and joined the “angels” including Gigi Hadid, Doutzen Kroes, Elsa Hosk, and others. Aldridge was called the hottest and most appealing “winged” model.

The woman participated in the presentation of the Rag & Bone spring collection and collaborated with the clothing company XOXO and the skin-care brand Proactiv in 2014; besides, she was a good photographer for them. At the same time, Lily had another achievement to boast: she appeared on the cover of Sports Illustrated along with Chrissy Teigen and Nina Agdal; it was the special issue for the 50th anniversary of the magazine.

The model was a spokesperson for the British GQ and appeared in the February 2011 issue; several weeks later, she participated in the editorial of the V magazine. In October 2014, Lily and some of her colleagues appeared in British Vogue.

In 2015, Lily had the opportunity to wear the Fireworks Fantasy bra that cost $2 million; the jeweler Pascal Mouawad created it. The show took place in winter in New York.

The same year, in spring, Aldridge personified a charming murderer in the music video “Bad Blood” by Taylor Swift. The model had had some experience before: in 2000, she appeared in Limp Bizkit’s “Break Stuff” with Eminem, Snoop Dogg, and Dr. Dre. Besides, Lily participated in two music videos for Kings of Leon: “Temple” and “Use Somebody”.

Although the celebrity is popular and gorgeous, she has not had many love affairs. She met her future husband, Caleb Followill, at the 2007 Coachella music festival. Followill is the vocalist and guitarist of the group Kings of Leon. Four years later, the couple married; the wedding took place in Montecito, California. It was an outdoor ceremony with many flowers. The bride was wearing a delicate, minimalistic dress by legendary Vera Wang.

In one of their interviews, the couple confessed it was the happiest day in their lives. At the same time, another Victoria’s Secret angel, Behati Prinsloo, started dating a musician, Adam Levine.

In 2012, Lily gave birth to her first child, the daughter Dixie Pearl Followill.

The model likes to watch and play soccer and spend time with her friends and family. She loves traveling and often goes to Australia: according to Lily, it is the best place for a tourist.

Aldridge frequently posts pictures on Instagram. She does not hesitate to publish selfies where she is not wearing any makeup or photos where she looks natural, for example, on a beach. Besides, there are many professional and amateurish photos where the woman is wearing lingerie or a swimsuit; however, the model never looks vulgar or too hot and sexy.

The model does not forget about her career: she participates in photo sessions for various magazines, such as Vogue or Bazaar, and motherhood is not a barrier for her. The woman successfully combines professional and family activities; she looks perfect and keeps a special diet.