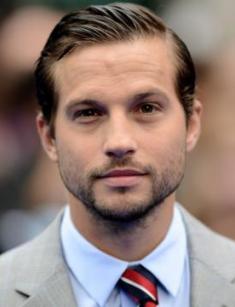 Logan Marshall-Green’s road to success was long. He began to play in 2003 and received his first lead role only in 2010. Today, the artist’s filmography includes various series and movies; some of them top-grossed while others failed spectacularly. Marshall-Green participates in dramas, fantastic movies, and thrillers mostly.

The would-be star was born on November 1, 1976, in Charleston, into a family of teachers. He grew up with his twin brother, Taylor; the boys never felt bored together. The father used to be a marine soldier and served in the Pacific Ocean during the Second World War. The mother taught drama at Brown University.

Logan spent his school years at Barrington High School and then enrolled at the University of Tennessee, Knoxville. As a student, the young man wrote for The Daily Beacon newspaper and focused on music and theater. Further on, he continued his education at the National Theater Institute in Waterford, Connecticut, and the Tisch School of the Arts in New York, receiving a bachelor’s degree in Fine Arts.

In 2003, Marshall-Green debuted in an episode of Dick Wolf’s series Law & Order: Special Victims Unit. His character is a sociopath and murderer Mitch Wilkens, also known as Max Van Horn. The show pictured the work of the professionals investigating sex-related high crimes.

The next year, the actor participated in an episode of the crime series Law & Order based on the work of the New York detectives and attorneys. The project starred S. Epatha Merkerson, Sam Waterston, Jerry Orbach, Freddie Dalton Thompson, and Chris Noth; it became the road to success to some of them.

In 2005, Logan had two parts in series. He personified Richard Heller in the series 24; his character was the son of the Minister of Defense, James Heller, and the younger brother of one of the main characters, Audrey Raines.

The 24 franchise tells the story of people fighting terrorists. It consists of eight seasons of the series, the movie 24: Redemption (2008), and the mini-series 24: Live Another Day (2013). The project won many prizes, including the Golden Globe, Emmy, Screen Actors Guild Awards, and Screen Actors Guild Awards for Outstanding Performance by a Stunt Ensemble in a Television Series.

The series The O.C. brought the part of Trey Atwood, who appeared in the second and third seasons.

In 2002, the actor had an episodic part in John Dahl’s The Great Raid about rescuing prisoners of war from a camp during the World War II; the events take place in the Luzon Island, the Philippines. For some reasons, the movie was premiered only three years later.

In 2007, one could see Logan in an episode of the musical Across the Universe about legendary The Beatles. The artist collaborated with Jim Sturgess and Evan Rachel Wood; Bono (U2), Joe Cocker, and Salma Hayek performed the group’s hits.

In 2010, after a chain of secondary roles, the audience had the opportunity to enjoy Marshall-Green’s main character in John Erick Dowdle’s mysterious detective thriller Devil. Logan played a former soldier and mechanic Tony. As the story runs, five people get stuck in an elevator; terrible things happen. The movie also starred Chris Messina, Jenny O’Hara, Bojana Novakovic, and Bokeem Woodbine.

The movie was supposed to be the prequel of the horror Alien but transformed into one of the three pictures set before those events. While fans criticized the characters and plot absurdity, the majority of movie experts appreciated the movie.

In 2016, the actor appeared in the crime drama series Quarry as Mac Conway. As long as he comes home from the Vietnam war and finds no legal way to earn, Conway becomes a hitman. Speaking about this role, Logan told journalists it was difficult for him: he was reflecting on it all the time and stayed in character for a long time.

The artist’s personal life has been calm and steady. In 2012, he married the little-known actress and painter Diane Gaeta. The woman did not follow the way that actors usually chose and took her husband’s second name.

The couple has two children: the daughter Culla Mae (born in 2010) from Diane’s first marriage and the son Tennessee (born in 2014).

Nowadays, Marshall-Green continues to participate in various projects. The sci-fi thriller Upgrade is one of the recent works; the artist collaborated with Melanie Vallejo and Harrison Gilbertson. The premiere took place at the South by Southwest festival in March 2018; critics’ opinions were favorable.

The story is set in the nearest future, where high technologies totally control human lives and a single experimental implant can give a person superpowers.

The actor has an Instagram page and posts some moments from his daily life: his family, himself, work-related photos, or just beautiful places the artist happens to visit.