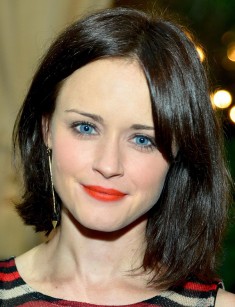 Kimberly Alexis Bledel is an actress of American cinema, who became known after the release of the series "Gilmore Girls." In her career she uses the name Alexis Bledel.

Alexis was born on September 16, 1981 in Houston, Texas, to the family of Argentina's native Martin Bledel and Mexican Nanette Blake. The ancestors of the girl on the paternal line were the Germans, the Danes and the English, nevertheless the family spoke Spanish. At 7 Bledel entered St. Agnes school.

To overcome shyness, since 8 years old Alexis attended a theater studio. Gradually the girl learned to play on the stage and got roles in the plays "Our City" and "The Wizard of Oz". All the performances of the children's theater were shown in the local shopping center, where the young actress was noticed by the manager of the modeling agency and offered Alexis to work as a model.

After graduation from school, Alexis studied for a year at Page Parkes Center for Modeling and Acting. In 1999 she became a student of New York University and the Tish School of The Arts, from which Martin Scorsese, Alec Baldwin, Lady Gaga graduated.

In late 90's Alexis made her debut playing episodic role in the teen comedy "Rushmore", which was shot in Houston. The real start of the creative biography of Bledel began in 2000, when the actress received a leading role in the series "Gilmore Girls ", in which she has been working until 2007. The comedy drama was broadcast on the WB channel.

The film was nominated several times for Emmy Awards, Golden Globe, Satellite Award and entered the 100th best show of the century. In the film Alexis plays the role of 16-year-old daughter of Lorelai Gilmore, played by Lauren Graham. After the second season Alexis got into the rating of the hottest young stars of Teen People. Melissa McCarthy, Kelly Bishop, Keiko Adzhena also starred in the film. In 2016 a mini-series with the same name was released on the channel Netflix.

In 2002 the fantastic film "Tuck Everlasting" by Jay Russell was released, in which Alexis played the main role Vinny Foster along with a young actor Jonathan Jackson, who played the role of Jessie Tag. In the Indian version of Jane Austen's Pride and Prejudice of 2004 - Bride and Prejudice with Aishwarya Rai and Martin Henderson in the title roles- Bledel plays the role of the sister of the main character Georgiana Darcy.

A year later in the filmography of the American actress the film "Sin City" by Robert Rodriguez appears, in which, along with Alexis, who played a prostitute Becky, the main roles were played by Mickey Rourke, Bruce Willis, Jessica Alba. In 2005 at the Cannes Film Festival the film received the first award for visual effects. The same year Alexis participates in the filming of the comedy "The Sisterhood of the Traveling Pants" along with Blake Lively, Amber Tamblyn and America Ferrero.

In 2008 there was a continuation of a melodramatic story about the friendship of four girls -"The Sisterhood of the Traveling Pants 2". In 2009 the comedy "School of Survival of Graduates" with Alexis in the title role was released. After graduating from college, the heroine Ryden Molbi has to reconsider her ambitious plans because she returns to her parents’ house. The same year the actress participates in the shooting of the film "The Good Guy".

In 2010 Alexis appears in a supporting role in the films "The Conspirator" about the investigation of Abraham Lincoln murder and in "The Kate Logan Affair", in which her partner became a French actor Lauren Luke.

In 2011 Bledel appears in the criminal action movie "Violet and Daisy" as one of two girl who earn a living as killers. A year later the actress plays one of the main roles in the comedy "The Brass Teapot" and appears in season 5 of the television series "The Crazies", which tells about the fictional advertising agency.

In the drama "Remember Sunday" by Jeff Blakner, Alexis Bledel and Zachary Levi play the young couple Molly and Gus. The young man suffers from a rare brain disease, in which he constantly loses short-term memory. So every day the young man falls in love with his girlfriend. A year later the actress appears in the film "Parts Per Billion ", in the series "Us & Them".

In 2014 there was a scandal around the actors who played the main roles in the film "50 shades of gray", the shooting of which was widely advertised in the press and on Internet. Fans of Matt Bomer and Alexis Bledel expressed a desire to see on the screen their idols, in favor of them 50 thousand votes were collected. But the roles of the main characters were played by Dakota Johnson and Jamie Dornan, who replaced the originally selected Charlie Hannam.

In 2015 Alexis took part in the creation of an independent film directed by Mary Agnes Donohue "Jenny's Wedding", dedicated to the legalization of same-sex marriages at the state level. The actress Katherine Heigl played the main character Jenny Farrell, known for starring in the series "Grey's Anatomy". Alexis Bledel played the role of her girlfriend, with whom the girl decides to get married.

Alexis has an average height (170 cm, weight - 50 kg) and she has always made an impression on the opposite sex. Nevertheless, the girl was not in a hurry with her personal life. She had relations with her partner in the series "Gilmore Girls" Milo Ventimiglia in 2002. The relationship lasted for 4 years but they broke up.

In 2012 on the set of the series "Crazies" Alexis Bledel met the actor Vincent Kartaiser, whom she married two years later. In autumn, 2015, their youngest son was born, but the press fond out the information about the first-born only in 2016. Even in the official account of the actress in Instagram, with 516,000 followers, there are no family photos with the child.

In 2017 the director Bruce Miller released the fantastic drama “The Handmaid's Tale” in which Alexis played the role of one of the servants of the Special Camp of the Republic of Gilead. The roles of the main characters also played Elizabeth Moss, Joseph Fiennes and Yvonne Strahovski.

Now Alexis pays most of her time to her family, raising her son. In May the girl came to support her friend, the actress Amber Tamblyn, who made her debut as a director of the movie "Paint it black." The actresses are friends since the work on the comedy "The Sisterhood of the Traveling Pants" and support the creative endeavors of each other.

Alexis Bledel has a net worth of $9 million. 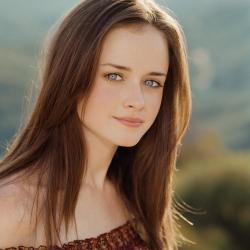