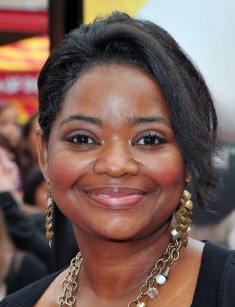 Octavia Lenora Spencer is an American film actress, winner of Oscar, Golden Globe, BAFTA for her supporting role in the film "The Help".

Octavia was born on May 25, 1972, in Montgomery, Alabama. There were seven children in the family. The future actress was the sixth child. Her mother Dellsena Spencer worked as a house made in the house of rich people. At the age of 43, the woman died. In the same year, Octavia graduated from the Jefferson Davis College and, in memory of her mother, entered the Faculty of Arts at Auburn University.

The girl studied drama and visual art. As a student, Octavia began to work as an intern at film studios, and then as an assistant of a casting manager. At 19, Spencer was lucky enough to work alongside Whoopi Goldberg during the comedy "The Long Walk Home".

In the early 90's Octavia received a Bachelor of Arts degree. She worked in the cinema and dreamed of an acting career. At the age of 25, Spencer decided to move to Los Angeles, where the beginning actors have a lot of opportunities.

Initially, Octavia helped to select actors for new films. In 1996, on the set of the thriller by Joel Schumacher "A Time to Kill" Octavia decided to ask the director for a small role. He agreed and allowed the girl to play a nurse. Subsequent roles also often turned out to be episodic. Octavia appeared in the films "Sparkler", "The Sixth Man", in the comedy series "Dharma & Greg", "Just shoot me", "ER".

In 1999, Octavia starred in the action movie "Blue Streak", in which the main roles were played by Martin Lawrence and Luke Wilson. And also the actress appeared in the art house comedy "Being John Malkovich" with John Cusack and Cameron Diaz in the main roles. In the comedy "American Virgin", the actress got the role of Agnes, and in the film by Raja Gosnell "Big Momma's House", Octavia played one of the relatives of the main characters Twila.

In the early 2000s, Spencer played in 25 comedies and detective films, such as "Four Dogs Playing Poker", "Sol Goode", "Spider-Man: Homecoming", "Legally Blonde 2", "Bad Santa", "Win a Date with Tad Hamilton". In the comedy “Miss Congeniality 2: Armed and Fabulous”, the actress appeared in the episode in the role of Octavia, in the movie "Beauty Shop" Spencer played an angry client.

The actress appeared in the series "Ugly Betty" and "Wizards of Waverly Place". In the 2008 drama “Seven Lives” starring Will Smith, Octavia played a senior nurse Kate. In the filmography of the actress there is a horror film by Sam Raimi "Drag Me to Hell", in which Octavia got the role of a bank employee, and in the drama Joe Wright "The Soloist", where the actress played a troubled woman.

In 2009, according to the Entertainment Weekly Octavia Spencer got to the list of "25 funniest actresses of Hollywood". In the same year, Octavia was invited to play the role of a nurse Daniela in the horror film by Rob Zombie "Halloween 2". In the science fiction series "Dollhouse" in 2010, Spencer played the role of Professor Jackie.

The drama of 2011 directed by Tate Taylor "The Help", in which Octavia played a housemaid Minny Jackson, was a turning point in the creative biography of the actress. For the film, Spencer won three top awards: Oscar, Golden Globe, and BAFTA.

During the Oscar-winning ceremony, Octavia burst into tears over memories of her mother, who had worked as a housemaid all her life. At this time the audience began applauding the actress. Touching photos were on the front pages of publications devoted to American cinema. Such actresses as Viola Davis, Emma Stone, Bryce Dallas Howard, Jessica Chastain also starred in the film.

Since the summer of 2012, Octavia Spencer has become a member of the Academy of Cinematography and began to appear in independent projects: "Smashed", "Call me crazy", "Fruitvale station", "Baggage claim", "Snowpiercer", "Paradise", "Red Band Society".

In 2014, the sci-fi film "Insurgent" with Shailene Woodley, Theo James, Keith Winslet, Naomi Watts in the lead roles was released. Octavia plays the role of Joanna Reyes. At the box office, the film collects $ 300 million.

Octavia Spencer is not married; the actress does not have her own children. Spenser dedicated her personal life to her numerous nephews - children and grandchildren of six brothers and sisters.

In 2016, three films were released with the participation of Octavia Spencer: the drama "Gifted", in which the actress played Robert Taylor, the continuation of the franchise "The Divergent Series: Allegiant" and the cartoons "Zootopia", where Octavia voiced the character of Mrs. Otterton. The cartoon received several prestigious awards, including "Oscar", and also broke the box office record, collecting $ 1 billion at the global box office.

In 2017, Octavia Spencer starred in the next part of the "Divergent", as well as in the drama "The Shack", in which she played the main role, and the scientific drama film "Hidden Figures." For the role of Dorothy Vaughan in the last film, which tells about the secret developments in the laboratories of NASA, which were made by African American women, Spencer was again nominated for Oscar.

Now Octavia Spencer is working on the role of Eliza in the fantastic drama "The Shape of Water", which tells about the amphibian man, who was kept in a secret laboratory for experiments. 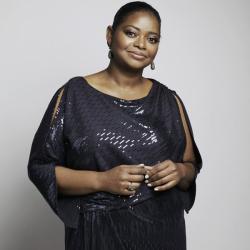