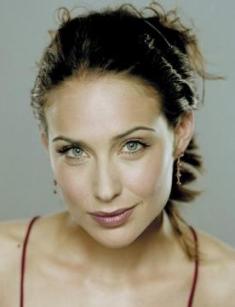 Claire Forlani is a British actress who has proved to film critics and movie lovers that she can star in any role. This woman appeared in both comedy films and action movies that made the hearts of the audience beat even stronger. Despite the popularity with the public, the star of the movie Meet Joe Black is a mysterious and antisocial personality, and that is the most exciting thing about her biography.

The future actress was lucky because she was born in the city of opportunities, the capital of the United Kingdom – London. It happened on December 17, 1971. The girl grew up and was brought up in a creative family, which largely predetermined her future.

The actress's mother, an Englishwoman by nationality, was an artist who was seriously interested in drawing and pleased customers with colorful paintings. And her father, a man with Italian roots, produced small British pop groups and also was a show business manager.

It is worth noting that Claire knew about her future calling since childhood. As a child, Forlani already thought about a career as an actress: the little girl happily participated in children's theatrical productions and Christmas performances, each time showing the talent that was given to her from birth. It is not surprising that the pretty and artistic Claire drew the attention of an advertising producer who worked in a well-known company BBC.

The man persuaded Claire's parents to sign a contract for their child to participate in the filming of commercials. However, the family Forlani felt that such an early start could affect the psyche of the child, who otherwise instead of a happy childhood would spend her days on the set and tours.

When the future actress was 11 years old, she became a student of the prestigious London school of art, where she began to comprehend the basics of acting carefully, and for six years diligently engaged in choreography. Among other things, the girl continued to participate in theatrical productions: she managed to shine in the cult ballet The Nutcracker and also played in the musical Orpheus in the Underworld.

Claire Forlani made her television debut in 1991. These were two episodic appearances in the program with the title Folds and the series Press Gang. A year after starting a career in the world of show business, this twenty-year-old girl went to the city of Zagreb, which is located in Croatia.

There, the actress was preparing for her first significant role in the motion picture Gypsy Eyes, which in the American box office was called CIA Surveillance. This picture was low-budget, so only a small number of people managed to see it. Despite this, Forlani continued to seek her place under the sun, trying out on numerous auditions.

Claire's next work wasn't a success either. The girl starred in the famous franchise Police Academy: Mission to Moscow (1994). She starred in the seventh part of the legendary movie, and the audience liked only the first two parts and was already tired of the same story.

In 1995, the girl who was 5 feet 44 inches tall and weighed 114 pounds participated in the comedy movie Mallrats. The film directed by Kevin Smith tells the story of young people who come to the supermarket not to work, but to have a fun, meeting and communicating with new people. The youth tape also featured the star of Enchanted Shannen Doherty, Jason Lee, Ben Affleck, Michael Rooker, and other show business stars.

In 1996, she tried herself in another genre-action, starring in the movie The Rock. The actress was lucky to work with such actors as Sean Connery, Michael Biehn, and David Morse.

In 1998, Claire, together with Brad Pitt starred in the motion picture called Meet Joe Black The mystical film with elements of drama tells the audience the story of a death angel, who decided to dilute his life and go to the world of people to observe the inhabitants of the earth, their emotions, daily duties, and spontaneous decisions.

By the time Forlani showed herself as a diverse actress, so the directors willingly invited the brunette to participate in high-budget projects. But, according to the woman, she tried to choose those movies which first of all were attractive to her.

"In the end, talent is not the fact that you get recognized on the street or in the store," Forlani said in an interview.

In 2006, Forlani tried on the image of Doris Frehman in the television series, filmed in the genre of mystery with elements of horror. The series Nightmares & Dreamscapes: From the Stories of Stephen King is based on the stories of the King of Horrors, the author of the famous works It, The Shining and Carrie, Stephen King.

A year later, Claire participated in the drama Hallam Foe, and in 2008, played in the movie Flashbacks of a Fool. This drama by Baillie Walsh tells the story of an actor, who after the death of his best friend plunged into the past. The leading role was played by a man remembered for the role of agent James Bond, Daniel Craig.

In 2011, Claire took part in the filming of the acclaimed series Camelot, which premiered on April 1. The series tells the life-story of King Arthur, who turns from a carefree young man into the heir to the throne. In this movie, Forlani was trusted with the role of Igraine, the biological mother of the main character. The character played a unique role at court.

Even though Claire is a closed personality and is of more of an introvert than an extrovert, journalists know a lot about her personal life. It can be challenging to avoid the attention of admirers and paparazzi for the woman, who because of her great looks has become the face of L'Oréal cosmetic company (she signed a $750,000 contract on with them).

By the way, for her age, Claire looks very young, so fans have suspicions about plastic surgery. However, whether Forlani went under the surgical knife or not remains a mystery.

Forlani has repeatedly been featured in the list of the sexiest beauties in Hollywood. So it is not surprising that the woman has always enjoyed the attention of men, and had several affairs in her life.

So, in the list of her former lovers are Benicio del Toro, John Cusack, Ben Stiller, and Keanu Reeves. With the famous Neo from The Matrix, Claire was in a relationship for three years, but the lovers never appeared together in public.

In 2007, Forlani accepted a marriage proposal from actor Dougray Scott. A few years later, Claire became pregnant, and in 2014, a son, Milo Thomas Scott, was born. The couple doesn't have more children.

In addition to the romantic relationship, from the biography of the actress, it is known that she is actively involved in sports, loves to travel, and learns to play the guitar. Also, Claire prefers solitude to be permanent hanging out with friends and colleagues. Among other things, the brunette does not use the Internet, so it is impossible to find her on Instagram.

Claire Forlani has a net worth of $7 million. It is known that the actress continues to appear in projects. Unfortunately, little is known about Claire's career in 2018. She is rumored to star in The Three Lucias, Honey in the Head and Five Feet Apart.