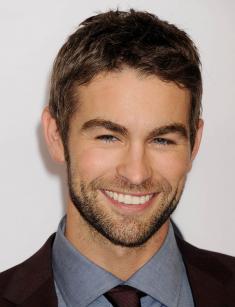 Christopher Chace Crawford is an American actor, famous for his part in the teen television series Gossip Girl, for which he won Teen Choice Award for Choice TV Actor Drama.

The future star of Gossip Girl and the idol of millions of girls, the actor Chace Crawford was born in the Texas town of Lubbock, the birthplace of the rock legend Buddy Holly. The boy's parents are ordinary Americans: his mother, Dana, works as a teacher, and his father, Chris, is a dermatologist. It is impressive that both children of this average couple suddenly became known all over the United States.

Chace's younger sister became a model and later devoted herself to journalism, having won the title of Miss Missouri USA. Chace himself also worked in the modeling business, while still at school, and earned good money from it, so the boy did not have to ask his parents for pocket money.

At school age, Chace took an interest in football, drawing, photography, as well as playing golf. Such diverse interests could not but affect his grades, but the boy, like all teenagers, did not worry about it too much. As for modeling career, Chace thought of it as just a hobby too, a hobby, which brought him a decent income.

According to the actor himself, he still shudders remembering how his mother forced him to wear cropped jeans when he was a child. Today, Chace absolutely loves to dress in style, including expensive smart suits, but he is also fond of brutal biker looks. Perhaps, it was childhood insecurities, caused by his mother imposing a specific fashion style on him that urged the young man to start modeling.

Whatever it was, currently no one could doubt Crawford's good taste and exquisite style of clothing, and tremendous credit goes to his mother for the support which she gave to her son, hearing that he decided to try himself in acting. After graduating from high school, Chace initially wanted to become a journalist or a doctor, like his father and enrolled at Pepperdine University, located near Malibu, California.

After years of studying, the young man suddenly realized that he was drawn to an acting career. It happened after he had the opportunity to take part in a theatrical production. The success turned him upside down. With his parents' blessing, he dropped out of University and started attending acting classes.

At the age of twenty, Crawford starred in his debut drama film Long Lost Son. At the same time, the actor worked on the set of The Covenant, but the motion picture wasn't very successful.

The television series Gossip Girl, which was broadcast in Canada and the United States on popular TV channels from 2007 until 2012, made Chace famous. The actor played in all six seasons of the project, and his main partners on the set were Blake Lively, Leighton Meester, Penn Badgley, Taylor Momsen, Ed Westwick, and other aspiring actors.

The plot of the television series revolves around the life and interests of the New York privileged upper-class adolescents, their chic outfits, apartments, limousines, and endless parties. Because of his part of handsome millionaire Nathaniel "Nate" Archibald, Chace became the idol of millions of teenagers and young girls and won several prestigious awards.

From this moment, people almost stopped confusing him with his male colleagues, Zac Efron and Ian Somerhalder (by the way, the resemblance between Ian Somerhalder and Chace is striking). He even almost got the central role in the film adaptation of Fifty Shades of Grey along with Alexis Bledel and other stars.

After Gossip Girl, he played in The Haunting of Molly Hartley and Twelve, an action drama teen film about drugs directed by Joel Schumacher. In 2012, the movie What to Expect When You're Expecting, in which Chace played together with Anna Kendrick came out.

When it comes to personal life, Chace has relatively conservative views. He was never a part of any juicy scandal, even though he dated famous actresses, models, journalists, and singers. At different times, the handsome man from Gossip Girl was said to have had affairs with famous movie stars, but one thing remains the same: Crawford is still single.

There is a lot of information in the press about Chace's girlfriends, but he never does interviews on this topic, and on his Instagram account there is not a single photo with any of his girlfriends. In 2008, he went out with country singer Carrie Underwood, but the couple soon broke up. Crawford appeared several times at official events with members of the Gossip Girl cast, Leighton Meester and Taylor Momsen, but rumors about them having an affair were not confirmed. In 2009, the celebrity was caught on camera kissing Ashley Greene, the star of Twilight.

In 2010, the actor was photographed when he had a date with Elizabeth Minett, a year later he attended the Oscar ceremony with Emma Roberts, and in 2012, Chace was spotted by paparazzi with sports commentator Erin Andrews. He was also said to have had an affair with Rachelle Goulding, but except for several pictures together, there is no proof of the existence of this relationship.

In early 2016, Chace Crawford was spotted having dinner with actress Nina Dobrev, who had recently broken up with her boyfriend, Ian Somerhalder. Ian, in turn, married Nina's friend, Nikki Reed.

In 2017, a new film with Chace Crawford, a horror movie Eloise came out. The actor played the leading part together with Eliza Dushku, Robert Patrick and other members of the crew.

Unfortunately, this motion picture was unsuccessful because it was flooded with clichés and platitudes.