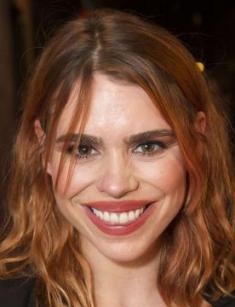 Billie Piper is a popular British actress, whose filmography has more than 30 remarkable roles. It is worth mentioning that in 2007 the blonde was ranked number 6 on Broadcast magazine's "100 most influential people" list. Avid film fans know Billie for the movies Spirit Trap (2005), True Love (2012), Penny Dreadful, and numerous TV shows. The woman has even played on the theatre stage in the play Treats.

Billie Piper was born on September 22, 1982, in the picturesque town of Swindon, which is located in Wiltshire, South West England. Billie was raised in an ordinary family; her father, Paul Piper, worked as a builder, and her mother, Mandy Kent, was a homemaker who looked after the children. They also had a son, Charley, and two daughters, Harley and Elle.

Few people know that the parents of the future actress originally named their daughter Leian Paul, but less than a month later, they changed their mind and gave the newborn girl a different name, Billie.

From an early age, Piper showed her love for art and began to make it into the show business. When the girl was five years old, she already danced and improved her singing skills, and two years later she began to appear on TV, participating in various commercials.

Therefore, when Paul Piper’s daughter turned eight years old, she was involved in the Sixth Sense Theatre to the delight of her parents. Later, Billie began attending Brookfield Elementary School and then studied at Brandon Forest School.

It is not surprising that the talented girl was a regular participant of the theatrical plays and productions. Thanks to showmanship and natural talent, the performer of the role of Rose Tyler in the series Doctor Who entered Sylvia Young Theatre School, where she soon won the contest for the best theatre production.

But there were also sad moments in Billie’s youth, for example, at the age of 16, the future actress suffered from anorexia. Although Piper moved to the cultural center of the UK, London, she missed her parents and quiet, measured life in Swindon. But the ambitious blonde braced her energies and every day repeated the words:

“Now, it is not easy. But if I give up, the unique opportunity will be lost forever, and I will regret it very much!”

Before appearing on the big screen, Billie Piper began her acting career with bit parts in TV series. In 2004, the young woman played in the comedy The Calcium Kid. This movie tells about a young man, Jimmy, who becomes the most dangerous fighter in the boxing ring because of his love for cow's milk.

Billie got a small role, but she was lucky to work on the same set with Orlando Bloom, Mark Heap, Michael Lerner, and Michael Peña.

The same year, Billie Piper participated in the drama Things to Do Before You're 30, alongside Dougray Scott, Jimi Mistry, Emilia Fox, and Shaun Parkes. The story shows the lives of ordinary people who will soon be 30 years old, and it is the right time to forget about youth and make adult decisions.

In 2005, Piper got lucky because she began to film in the cult science fiction series Doctor Who. Two years later, the actress appeared in the film Mansfield Park, based on the novel by Jane Austen, in which she portrayed the title character of Fanny Price. Jemma Redgrave, Maggie O'Neill, Blake Ritson, Hayley Atwell, Joseph Beattie, James D'Arcy, and other movie stars also entered the brilliant cast of this film.

Later, Billie Piper starred in the movie The Shadow in the North (2007). This crime film tells about Detective Sally, who has learned the terrible secret of the company, Anglo-Baltic, which business is built on a dark and sinister secret. Billie Piper worked on the same set with Jared Harris, David Harewood, and Matt Smith.

In 2007, Billie Piper was also cast in the leading role in the TV series Secret Diary of a Call Girl. The drama series tells the story of beautiful Hannah, who has a double life as a high-class call girl as her alter ego Belle.

Since 2014, the actress who is 5.41 ft. (165 cm) tall and weighs 123.45 lbs. (56 kg) has starred in the chilling series Penny Dreadful, which focuses on the characters of the 19th-century London. While the inhabitants go about their business, the terrible evil creatures gather in the British city.

In 2016, Billie Piper was lucky to play a title role in the crime thriller City of Tiny Lights, which focused on a private investigator and a frivolous woman who asked the officer to find her best friend.

Of course, Billie Piper is a talented woman. She has proved herself to be a gifted actress and pop singer. Belle signed a contract with a well-known record company when she was 15 years old. The singer's discography has three albums, and the debut album Honey to the B (1998) was certified platinum.

As for her romantic relationship, in 2001, Billie accepted the proposal of the popular TV host, Chris Evans. However, the relationship between these two creative people did not last long. Two years after the wedding, they decided to live separately, and the couple finalized the divorce in 2007.

In 2006, Piper had a torrid love affair with actor Matt Smith, who played the eleventh Doctor in the series Doctor Who. But this relationship soon ended.

A year later, Billie married British actor Laurence Fox. Two children were born in this happy marriage. They have sons, Winston James Fox (2008) and Eugene Pip (2012). However, the lovers decided to separate and filed for divorce in 2016.

It is unknown whether the beautiful woman has a new boyfriend or not. At least, Billie does not post photos of her lover on her official Instagram page.

2017 was fruitful for the English actress, because, rumors have it that she will appear in three films. These are the short drama Beast, the mini-series Collateral, and the film Yerma, which also features Brendan Cowell, Charlotte Randle, John Macmillan, Maureen Beattie, and Thalissa Teixeira.

Billie Piper has a net worth of $12 million.