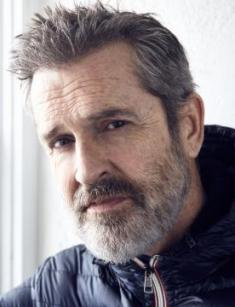 Hollywood characterized Rupert Everett as the handsome man whom no woman would ever get; the actor replied that gays and women had something in common. The media and colleagues did not like the actor: nobody expected the descendant of Charles II of England to be that proud, unfriendly, and unwilling to comply with social norms. According to Times, if arrogance were paid, Everett would become a millionaire.

The celebrity remembers his early years with sadness and horror. The boy’s father, Anthony Michael Everett, rarely participated in his son’s upbringing: he spent days serving the British Army. The mother, Sara Maclean, came from a noble family; she gave Rupert and his elder brother Simon Anthony to governesses. As the actor mentioned in his interviews, the upper-class entertainment, like fox hunting, made him feel disgusted.

According to the traditions of the high society, the seven-year-old boy went to the private Farleigh School. The strict schedule was like a punishment for the child; he decided to become famous and set free of the rules. The situation was no easier at the prestigious Catholic Ampleforth College. At that time, the young man recognized his acting talent. Everett joined the local theater and often played women thanks to his appearance.

By 16, Rupert got fed up with the monastery walls and fled to London. The young man broke bad; as the artist told journalists later, he was “a sex machine to both genders” and accused the strict religious rules of that. However, the would-be actor also felt guilty of having sex; he feared of diseases, especially HIV/AIDS.

Everett had a good voice, but there were little perspectives to become a vocalist. The young man entered the Royal Central School of Speech & Drama but got expelled soon because of permanent conflicts with peers and teachers. Finally, the Glasgow Citizen Theatre accepted him.

The play Another Country brought long-awaited fame. Julian Mitchell's drama presented the story of the English diplomat and spy Guy Burgess in his youth. In 1984, the play was adapted to the movie screen. It was Rupert who took the lead part. The main character’s second name was changed to Bennet. Everett collaborated with Colin Firth; rumors had it he wanted to have an affair with Firth, and the actors had a conflict.

Everett and Firth had to meet again at the movie set of the comedy The Importance of Being Earnest with Reese Witherspoon and Judi Dench. They made it up when they were working on the comedy St. Trinian's where Colin personified the Minister of Education while Rupert played the unbearable headmistress.

British critics called Rupert’s Algernon (The Importance of Being Earnest) and Lord Goring (An Ideal Husband) the best presentation of the classic characters.

Judi Dench and Everett also had another chance to collaborate: they appeared in Tim Burton’s Miss Peregrine's Home for Peculiar Children. The actor portrayed one of the werewolf’s (Samuel L. Jackson) personifications.

As Hollywood Reporter marked, the man stole the fame of the Hollywood beauty Julia Roberts in My Best Friend's Wedding. The next part in Shakespeare in Love that won seven Academy Awards was small: he played Christopher Marlowe who parted Shakespeare (Joseph Fiennes) and Gwyneth Paltrow’s characters.

1999 brought the role of the villain in the adventure action Inspector Gadget based on the cartoon under the same title. The next year, Everett and Madonna appeared in The Next Best Thing by John Schlesinger. Six years later, the singer asked the actor to become her stepson’s godfather; the woman adopted David Banda in Malawi.

Further on, Rupert appeared in the French mini-series Les Liaisons Dangereuses starring Catherine Deneuve and Nastassja Kinski. It is the screen adaptation of Choderlos de Laclos’s novel; the story is set in the late 1960s in France, not the 18th century.

The actor had the honor to play his ancestors, Charles I and Charles II, in the drama To Kill a King and Stage Beauty about Shakespeare’s theater development. In 2015, Rupert also played a royal member: George VI, the father of Queen Elizabeth II. The melodrama A Royal Night Out bears some resemblance to the movie with Audrey Hepburn who played the princess going out.

The reviews on the comics-based fantasy action movie Stardust (2007) were ambiguous. Everett had a minor part. Critics agreed that the plot was unclear, and only the cast saved the project: Robert De Niro, Peter O'Toole, and Michelle Pfeiffer. However, the audience loved the story about the young man looking for the fallen star.

In 2006, people had the chance to watch Rupert playing Grigori Melekhov in Quiet Flows the Don; the French actress Delphine Forest got the role of Aksinia. Sergei Bondarchuk began the project, and his son Fyodor finished it. The series gave Everett many exotic memories and changed his spirits; the man stopped being the snow king.

Everett participated in the popular British project Black Mirror, the warning to humanity abusing the technological progress. The actor appeared in the second episode of the first season and played a talent competition jury member. Participants have to pay a lot of money, but a victory gives the chance to change their lives dramatically.

Rupert has voiced many characters: Prince Charming in Shrek 2, Mr. Fox in The Chronicles of Narnia: The Lion, the Witch and the Wardrobe, and Sloan Blackburn in The Wild Thornberrys Movie.

Rupert is one of the first celebrities who came out as gays. It happened in 1989 and seemed to be a suicide. The actor used to think that his confession caused the lack of good roles in his filmography.

In 2009, Rupert admitted that excessive frankness could lead to oblivion in cinematography. According to the man, Hollywood made actors play gays while ignored gays’ needs while European artists had no career problems.

At the end of the 1980s, Everett “gave” his face to Dylan Dog, the main character of the Italian comics by Tiziano Sclavi. His stories are still published and keep the second position in the sales.

The actor mentioned in his interviews he liked animals more than people. Rupert bought a house in California for his Labrador Moise and rejected a role when the dog was undergoing treatment.

Another scandal erupted when the actor said it was the worst situation when gay people brought up children; he added he was not going to judge Elton John and David Furnish if they took that step. Rupert’s mother knew his boyfriend, yet she dreamed of a traditional family for her son.

Everett pays much attention to his appearance. The man’s height is 6.33 feet (193 cm.), and his weight has never been more than 194 lbs. (88 kg.). Rupert regularly jogs and goes to the gym. At 50, he had surgery and appeared on a TV show with his new face: the jaw and neck lines improved, and the actor got rid of wrinkles.

In the course of time, the celebrity stopped being proud and moved to his mother who lived in Wiltshire. In 2006, he published the autobiography Red Carpets and Other Banana Skins. It was not the writing debut: the first book Hello, Darling, Are You Working? was released in 1989.

In 2017, Everett appeared in The Judas Kiss staged at London's Hampstead Theatre. The play proved to be a tremendous success.

In 2018, the British artist presented the movie The Happy Prince at the Sundance Film Festival. Everett directed the story about Oscar Wilde’s last days, wrote the script, and played the main character.

Tom Wilkinson, Emily Watson, and Colin Firth participated in the project; thanks to Firth’s presence, sponsors from Germany, France, Italy, and Belgium were quite generous and provided more financial support than needed.