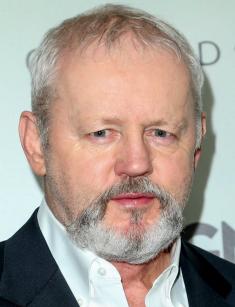 David Morse is an American actor, director, screenwriter, and singer. He first came to national attention in the 80s as Dr. Jack Morrison in the medical drama series St. Elsewhere. He became world famous for the movies such as The Negotiator, Contact, The Green Mile, Dancer in the Dark, Disturbia, The Long Kiss Goodnight, The Rock, and 12 Monkeys.

David Bowditch Morse was born on October 11, 1953, in Beverly, Massachusetts. He is the first of four children in the family of Charles and Jacquelyn Morse. He grew up with three younger sisters. David's mother worked as a schoolteacher, and his father was a sales manager. Morse was raised in Essex and Hamilton.

After graduating from high school, Morse studied acting at the William Esper Studio. In 1971, 18-year-old David began his acting career as a player for the Boston Repertory Theatre appearing in more than 30 productions from 1971 to 1977.

In the late 1970s, Morse continued his stage career at the Circle Repertory Company in New York City, before moving into television and film. In the late 1990s, he returned to the Off-Broadway stage, playing the title character in Paula Vogel's Pulitzer Prize-winning drama How I Learned to Drive. For the role of Uncle Peck, the actor won the Drama Desk and Obie Awards.

Morse made his feature film debut in 1980, playing the leading role of a cheerful bartender who became a basketball player in the movie Inside Moves. The drama directed by Richard Donner starred John Savage and Diana Scarwid. Although the film Inside Moves was nominated for the Academy Award, David had to wait several years before his acting career took off.

David Morse made a breakthrough in his career in 1982 when he appeared on television playing the role of Dr. Jack "Boomer" Morrison, a young physician who became a single father after the death of his wife. The series St. Elsewhere is a medical drama that aired for six years and had six seasons.

Morse appeared in some supporting roles following the finale of St. Elsewhere wanting to find characters that were different from what he had been doing. At that time, his filmography included such movies as Place at the Table, Winnie, Desperate Hours, The Indian Runner, The Good Son, The Getaway, The Crossing Guard. The actor also actively played in the TV series Brotherhood of the Rose, American Experience, Midnight Caller, Tales from the Crypt, The Hat Squad, The Langoliers.

In 1995, David Morse played the role of Dr. Peters in the fantasy thriller 12 Monkeys. The film, which won some prestigious awards, including Golden Globe and Saturn Awards, also starred Bruce Willis, Brad Pitt, and Madeleine Stowe. The following year, Morse played in the thrillers The Rock, Extreme Measures and The Long Kiss Goodnight. The movies were highly rated by IMDb users and approved by film critics.

In 1997, David co-starred with Jodie Foster and young Jena Malone in the Oscar-nominated sci-fi drama Contact. In 1999, he appeared in the movie based on Stephen King’s The Green Mile, alongside Tom Hanks and Michael Clarke Duncan. The drama received four Academy Award nominations.

In 2000, David played the secondary role of the kidnapped husband of Meg Ryan’s heroine in the action movie Proof of Life and the musical Dancer in the Dark with Björk in the lead role. In 2001, the actor took part in the film based on Stephen King’s novel Hearts in Atlantis again. Anthony Hopkins and Anton Yelchin also starred in the detective drama.

In 2002, David Morse became the first English-speaking actor nominated for the Golden Horse Award (the Chinese equivalent to the Academy Awards) for his excellent role as FBI expert, Kevin Richter, in the film Double Vision.

From 2002 to 2004, Morse played the role of Mike Olshansky, a former police officer from Philadelphia who became a taxi driver, in the TV series Hack. Three seasons of the crime drama were filmed in Philadelphia, not far from the actor’s house.

In 2006–2007, David Morse had a recurring role as Detective Michael Tritter in the third season of the medical drama series House. The same year, the series won an Emmy Award for Outstanding Drama Series.

In 2008, Morse portrayed George Washington in the HBO mini-series John Adams, which garnered the actor a second Emmy nomination. The series tells about the career and personal life of the leader of the American Revolution and the 2nd President of the United States, John Adams.

In 2010, David starred in two episodes of the HBO drama series Treme, as Lt. Terry Colson of the New Orleans Police Department. The same year, Morse won the best actor award at the Karlovy Vary International Film Festival for his role in the drama comedy Collaborator.

In 2013, the actor portrayed an ex-CIA agent in the film World War Z. In 2015, David Morse played the role of the late NFL player, Mike Webster, in the biopic Concussion, starring Will Smith.

The actor considers The Green Mile, The Crossing Guard, and The Indian Runner to be his favorite movies.

David Morse's wife is actress and writer Susan Wheeler Duff. They got married in 1982. The couple has three children: daughter Eliza and twin sons Samuel and Benjamin. The family lives in Philadelphia, Pennsylvania.

Morse went in for sports in his youth. But all attempts to become an athlete came to ought when he auditioned in a school play and eventually got a part.

“I didn’t want to do anything else for the following four years in high school,” the actor said in an interview.

David does not have accounts on Instagram and Twitter, but fans post Morse’s photos on social media and use a #davidmorse hashtag for ease of searching.

Now the actor continues to star in the 2018 drama series Escape at Dannemora about a female prison employee, who helps two prisoners escape.

The project also features Benicio del Toro, Patricia Arquette, and Paul Dano. The second season is planned to be released in 2019. David Morse has a net worth of $3 million.