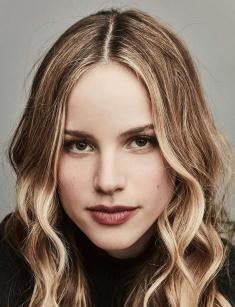 Halston Sage is a famous actress from the United States, who starts her career with a popular sitcom called Victorious at the age of eighteen. Earlier, she broke into modeling at the age of fourteen, but the main passion was still only acting. She became famous for portraying roles in many television series opposite such celebrities like Adam Sandler, Salma Hayek, Cara Delevingne, Victoria Justice and many others. Also in Sage's filmography, there are the projects of Sofia Coppola and Jake Schreier.

Halston Sage was born and raised in “the dream factory” - Los Angeles, California on May 10, 1993. So it was not a surprise that Sage from a very young age dreamed of becoming a Hollywood star.

Halston grew up in a family unrelated to the film industry. Her father Lenny Sage and mother Tema Sage also raised her younger brother Max (born in 1995) and a younger sister Kate (born in 1999).

At first, the future actress was planning to become a doctor, considering dentistry as the most preferable. But, at the age of fourteen, Halston suddenly realized that living in Los Angeles and not dreaming of getting on full screens was unnatutal.

The future TV star found out that attractive appearance is one of a necessary part of a successful career in films and show business. Therefore, the girl started to do sports and keep an eye on her nutrition.

In high school, having a photogenic face and model criteria (with a height of 65.35 inch and weight of 116,8 lbs), Sage shot in commercials advertising clothes and cosmetics and posing for photographers of a modeling agency.

However, it was not the podium that brown-eyed blonde aimed for – it was the acting career. Halston took the stage name Sage, sent out photos to the agencies and went for the casting session. In 2011, the girl was lucky: she got a chance to appear on the big screen.

For the first time Sage appeared as a guest star as Sadie in an American sitcom Victorious created by Dan Schneider in one episode Beggin' on Your Knees. This series was originally aired on Nickelodeon from March 27, 2010, to February 2, 2013, and received warm reviews from the youth audience.

Halston Sage cast opposite Victoria Justice, Ariana Grande and Avan Jogia who already had an acting experience except for Dan Schneider’s sitcom. So it was Sage’s breakthrough: after shootings in Victorious, producers started to make offers to the young actress.

In 2012, Halston Stage debuted in big screen starring as Grace in Nickelodeon’s series How to Rock and Bucket & Skinner's Epic Adventures, and in films The First Time and Joan's Day Out.

The most top-rated series was How to Rock directed by Jim O'Doherty, in which the girl starred a lead role. The series is based on the 2011 book, How to Rock Braces and Glasses by Meg Haston. The teen sitcom began broadcasting on the Nickelodeon channels on February 4, 2012, in Russia in October 2012.

In 2013, Halston Sage featured in satirical crime movie The Bling Ring directed and produced by Sofia Coppola and in comedy Grown Ups 2 co-produced and starred by Adam Sandler.

In 2014, Sage hit the Hollywood with her comedy Neighbors, which won Golden Trailer Awards, directed by Nicholas Stoller. On the set, the actress shot alongside Zac Efron and Rose Byrne. Due to Sage’s supporting role of Brooke Shy, she was a nominee for the MTV Movie Award for Best Kiss.

This comedy-drama was based on the 2008 novel of the same name by John Green. The film received mixed reviews; however, it grossed over $85 million worldwide after the theatrical release, against a $12 million budget. Nat Wolff and Cara Delevingne starred lead roles, and Sage got an essential part of Lacey Pemberton.

Halston Sage was in a relationship with James Maslow from 2012 to 2015. The couple met each other on the sets of the sitcom How to Rock and started dating early in 2012. However, they decided to break up amicably in 2015. They continue to remain good friends.

April is a special month for Sage because she met James and broke up with him exactly in April. Also in April 2014, Sage was rumored to be dating her “Neighbors” co-star Zac Efron. Their onscreen chemistry sparked off rumors of the relationship, but neither Sage nor Efron confirmed anything but rumors suggest that they broke up within a month of dating each other. Halston was next to Zac when he got into a rehabilitation facility, where he was treated for alcoholism and solvent abuse.

The duo were all smiles when the press spotted them in their courtside seats as they excitedly cheered for the Los Angeles Lakers at the Staples Center. Friends of the actors claimed that they had similar features of character and a symbiotic relationship. Unfortunately, the affair with the heartbreaker Efron ended the same year: Zac was spotted in a relationship with bisexual Michelle Rodriguez.

On the Halston Instagram, where she has over half a billion followers, there no any photos with Efron.

Many new projects appear in Halston Sage’s filmography due to the growing popularity in Hollywood and her successful career. In 2017, Halston cast in four new pictures.

In March, teen drama Before I Fall was premiered directed by Ry Russo-Young, based on the 2010 novel of the same name by Lauren Oliver. In Russia, it was released in July. Halston Sage portrayed the central role of Lindsay Edgecombe starring alongside Zoey Deutch and Erica Tremblay. The movie’s filming took place in Canada.

In September, science fiction comedy-drama TV series The Orville began to air on Fox. Inspired by several sources, including Star Trek and The Twilight Zone, the series tells the story of Mercer, Grayson, and the crew of the Orville as they embark on various diplomatic and exploratory missions. The 13 billion viewers watched this TV series and liked it, so the producers renewed the series for a second season. Halston Sage played a primary role of Lieutenant Alara Kitan, Orville's young chief of security and the girl that has greater-than-human strength in Earth gravity.

This American star proved that she could play light comedic roles and got into female characters experiencing a complex range of feelings. In 2017, the viewers could watch a thriller You Get Me, in which Halston Sage cast opposite Bella Thorne and Taylor John Smith. The movie is about a love triangle tragedy directed by Brent Bonacorso who kept viewers on the edge of their seats until the final scene of the film.