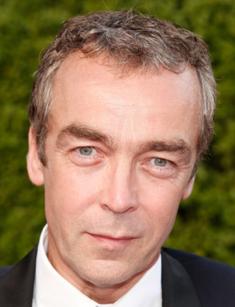 John Hanna's filmography includes more than a hundred film roles, works on television series and the stage. Success came to the actor at a relatively mature age, but, as they say, once and for all - with the role in the famous comedy film Four Weddings and a Funeral. Now it is difficult to believe that John did not think about a career connected with acting and that his popularity made him feel uncomfortable at first.

On an April day of 1962, the family of a cleaning lady, Susan, and a toolmaker, John, had a long-awaited son. The boy was named John David. He has two older sisters, Elizabeth and Joan. The family lived South of Glasgow in East Kilbride. As Hannah later admitted, he always wanted to leave Scotland even before he became an actor.

John graduated from Claremont High School in East Kilbride and at the age of sixteen started living independently from his parents. He learned to be an electrician and worked for several years in this profession; however, he never enjoyed it. At the same time, Hannah participated in amateur stagings of the local theater.

The turning point in John Hannah's career was the advice of his senior colleague, Tommy Byrne, with whom they watched and then discussed old movies and TV shows together, to find a more appropriate place for his talent.

So the former electrician found his true self at the Royal Scottish Academy Of Music And Drama. After graduating from the academy, Hannah started working on television, and performing on the stage of The Royal Shakespeare Company (RSC) and The National Theater of Scotland.

Tommy Byrne, who encouraged Hannah to engage in filming seriously, died shortly before the triumphal appearance of the student in Four Weddings and a Funeral. In the famous scene of his character Matthew's performance at the funeral, as the actor later admitted, John addressed Tommy too.

Before getting a part in the life-changing movie directed by Mike Newell, John acted in several television shows. There were many detective shows and crime dramas, such as Taggart, Midsomer Murders, and Agatha Christie's Poirot Appointment with Death.

In the movie Four Weddings and a Funeral, John played a shy young man hopelessly in love with a girl who he sees only at weddings and funerals. For his work on this move, John Hannah was nominated for BAFTA.

Hannah played a modest guy once more in the film Madagascar Skin, starring together with Bernard Hill and Mark Anthony. A birthmark disfigures the face of his character, and he is also gay, and for that, he gets bullied and humiliated. The guy decides to find solitude and goes to live by the sea.

In the romantic comedy-drama film Sliding Doors, John performed the leading role together with Gwyneth Paltrow. At the same time, the actor was working on the crime comedy movie The James Gang, featuring Jason Iain Flemyng.

Hannah got the central part in the motion picture The Mummy, in which he portrayed Jonathan Carnahan, a drunk smuggler, the brother of the main character played by Rachel Weisz. The actor continued to play this character in two sequels—The Mummy Returns and The Mummy: Tomb of the Dragon Emperor.

For the role of Jonathan Carnahan, Hannah was nominated for the Blockbuster Entertainment Awards in the category Favorite Supporting Actor - Action/Adventure Film. It was a high-grossing motion picture which received a nomination for Academy Awards, The Saturn Awards, and BAFTA; and received the International Film Music Critics Association Award.

The movie had an impressive cast, Arnold Vosloo, Brendan Fraser, and Dwayne "The Rock" Johnson, who later would shine in a spin-off called The Scorpion King. John starred in another film adaptation of the science fiction novel by Robert Louis Balfour Stevenson about Dr. Jekyll and Mr. Hyde. This time, the actor also tried himself in producing.

In 2003, the Scottish actor appeared in the film I Accuse, based on the real events of the early 90s, which revolved around a Canadian doctor, Dr. John Schneeberger. The doctor was accused of rape of his female patients when they were under anesthesia, and also of his wife's daughter from her first marriage.

In 2010, Hannah had a vibrant role of Quintus Lentulus Batiatus, the owner of gladiators school, who was willing to do anything for fame and money, in the drama television series Spartacus: Blood and Sand.

He places his hopes on Crixus, who is portrayed by Manu Bennett. Batiatus' manipulative wife is played by a New Zealand actress, Lucy Lawless. John continues to play this role in the prequel called Spartacus: Gods of the Arena.

The audience remembered John's participation in the drama thriller film The Words, which came out on the big screen in 2012. Bradley Cooper performed the role of a writer who finally got to taste fame. However, it soon becomes clear that his work is plagiarism, and the real author begins to pursue the scammer.

The other roles were played by Zoe Saldana, Jeremy Irons, Olivia Wilde. The critics didn't like the movie. As the editor of the Hollywood Reporter wrote, the script of The Words got into the "blacklist" of all scripts of Hollywood.

In the crime drama television mini-series Amnesia, released in 2004, John Hannah got the role of the police detective D.S. Mackenzie Stone, investigating into the disappearance of his wife, which happened on the day of their wedding anniversary. The only person who can help in the investigation is a man struggling with a severe case of amnesia, who lives in the same town.

The famous actor also became a part of the Marvel film universe. The Scotsman appeared in the superhero television series Agents of S.H.I.E.L.D. as Holden Radcliffe, a researcher conducting experiments on transhumanism and creating inhumans.

Another marvelous film starring Hannah is a loose interpretation of Shakespeare's play A Midsummer Night's Dream. John got into the character of Theseus, a dictator duke, who controls the fate of his subjects.

John lives in a wealthy London suburb of Richmond with his wife Joanna Roth, son Gabriel and daughter Astrid. Joanna is also an actress, she starred in Sliding Doors together with her husband, however, in 2011, she quit the film industry to devote herself wholly to the family. The couple got married in 1996, Hannah proposed to his beloved by writing the cherished question on the tablecloth at a restaurant. In 2004, they had children.

After John played a police officer who has epilepsy in the television film Out Of The Blue, he became engaged in charity work, supporting Epilepsy Scotland, Scotlands leading epilepsy charity campaigning for improved healthcare, better information provision and an end to stigma.

The actor does not want to move to the cinematic Mecca - Hollywood, and he also does not miss his small homeland of East Kilbride. He likes London, and the only place Hannah could have moved to is New York. And only because the actor thinks that life there is crazier and faster.

John Hannah has a net worth of $4 million. In 2017, John Hannah became a member of the cast of the fantastic action movie Genesis. The population is divided into castes according to gene modification. The authorities look perfect, scientists have the intelligence, and laborers have physical strength.

The main character doesn't belong to any caste; he has no "modifications," and no parents. Leaving in a foster family, he is forced to pretend to be one of them, at the same time trying to fight injustice. The first part of the trilogy came out in July 2018.

In the same year, the premiere of the movie Overboard starring Eva Longoria, Emily Maddison, Joanna Roth, and John Hannah, took place. This is a remake of the 1987 film, starring the married couple Goldie Hawn and Kurt Russell. In the new version, a central character is a wealthy man, who due to difficult circumstances had to realize that he is actually not rich at all.

The animated film Princess Emmy about a girl who can talk with horses was released in 2017. In it, King Karl speaks with John Hannah's voice.

At present, John Hannah's net worth is estimated at $4 million.