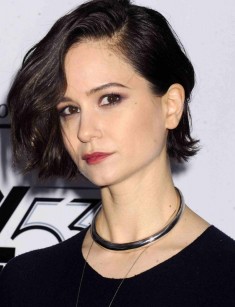 Katherine Boyer Waterston is an American actress who appears in movies and on the theater stage. She is known for her roles in the Hollywood movies Steve Jobs, Inherent Vice, and Fantastic Beasts and Where to Find Them.

Katherine Waterston is American, but she was born in Westminster, London: when the girl was born, her parents worked in England under a contract. The father, Sam Waterson, was an actor: he starred in the famous drama The Man in the Moon. The mother, Lynn Louisa Woodruff, was a model and had finished her career when Katherine was born. Soon, the family came back to the United States; Katherine’s sister Elisabeth and brother Graham were born soon. Waterston also has an elder half-brother James from the father’s first marriage.

All the children are engaged in cinematography: Graham is a director, and the rest including Katherine are actors.

Katherine Waterston studied acting at the prestigious Tisch School of the Arts at New York University. She began her career as a theater artist and performed on Broadway; the role of Anya in Cherry Orchard was among her works. Later, the young actress moved to Los Angeles and continued her theater career; at the same time, she gained some experience in movies. Gradually, she was becoming more and more popular.

Katherine Waterston’s debuting roles were minor; she appeared in the comedy Americana, the thriller Michael Clayton, the romantic comedy Rabbit Without Ears, and the musical Taking Woodstock. She also participated in several episodes of the crime drama Boardwalk Empire.

Because the woman was tall (180 cm.), it was difficult for directors to find partners for her; for this reason, Katherine gained the first significant role only ten years after she had begun her career: it was the high-concept thriller The Letter starring Winona Ryder, James Franco, and Josh Hamilton.

The Disappearance of Eleanor Rigby: Her trilogy and the crime comedy Inherent Vice followed. The actress was nominated for Satellite Award for the role in the latter project. Waterston was showered with new offers, and she could choose where she would like to participate.

The actress appeared in the light comedy Are You Joking?, the sports drama Glass Chin, the psychological drama about women’s friendship Queen of Earth, and the biographical movie Steve Jobs where she played the hippie girl Chrisann Brennan, the first love of the famous businessman.

Fantastic Beasts and Where to Find Them was one of the most expected movies in fall 2016. It was based on the script created by Harry Potter’s “mother” J.K. Rowling. Katherine co-starred with Eddie Redmayne, Ezra Miller, Colin Farrell, and other celebrities. Waterston played the witch, Tina, whom the main character meets when he visits America. Tina and Newt go for an expedition to look for new magical creatures.

The movie was a tremendous success; it was nominated for several prestigious prizes including the Academy Award and won the Oscar, Saturn Awards, and BAFTA.

In May 2017, the sci-fi movie Alien: Covenant came out. It is the sequel of the previous work by Ridley Scott, Prometheus, and another prequel of the original movie Alien.

In her interviews, the actress said she hated horrors and tried to avoid watching them because she was afraid of them. During the early screening, the actress asked those present in the movie hall to share their tequila: she wanted to mute her fear. Nobody had tequila. When the lights went out, the director Ridley Scott offered the actress some vodka.

Initially, Rebecca Ferguson was going to take the role of Tina, but Katherine Waterston was chosen in the end. Her acting was brilliant.

In summer of the same year, Steven Soderbergh’s adventure comedy Logan Lucky was released. The cast was full of stars: Daniel Craig, Channing Tatum, Katie Holmes, and others.

In December 2017, the historical and biographical movie The Current War release was scheduled; it told the story of the contradiction between Thomas Edison (Benedict Cumberbatch) and the entrepreneur George Westinghouse (Michael Shannon). Katherine Waterston also gained one of the key roles. On September 9, 2017, the early screening took place in Toronto. However, because the scandal over Harvey Weinstein erupted, the movie was removed from the distribution, and the release was postponed.

Katherine Waterston tries to keep her private life far from the public. She does not speak about her boyfriends and romantic relationships with journalists, fans, or colleagues. She says she is not married and has no children; according to the actress, this information is enough.

However, social networks provide more details. As it turns out, the actress has been dating the American scriptwriter, director, and musician Adam Rapp for a long time; the man is 12 years older than Katherine. Rapp created the scripts for the series Vinyl, Flesh and Bone, The L Word, and so on. Today, the couple is working on the new project, Red Light Winter, where Katherine will have the lead role; her lover is a scriptwriter and director.

There are fan pages of the actress on Instagram and Twitter; Katherine has no personal pages there.

In November 2018, the second movie of the Fantastic Beasts cycle, Fantastic Beasts: The Crimes of Grindelwald, was presented. Many people were looking forward to the premiere after the success of the first part.

Several movies starring Katherine Waterston are in post-production. In the drama State Like Sleep by the beginning director Meredith Danluck, the artist plays the main character whose name is also Katherine. After her husband commits suicide, the woman learns he had lived a double life. To learn more about his death, she has to go to a private sex club popular among wealthy men. The movie was presented at the Tribeca festival in April 2018; the audience welcomed this work.

Besides, Katherine will appear in the biopic about the life of the Norwegian explorer Roald Amundsen; the movie will probably be entitled Roald. Katherine will play the main character’s lover. The movie will be shot in Iceland, the Czech Republic, and Norway. The director Espen Sandberg known for Pirates of the Caribbean: Dead Men Tell No Tales will work on this project. The date of the premiere is unknown; it will take place no sooner than 2019. 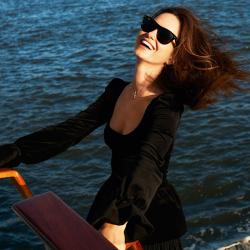