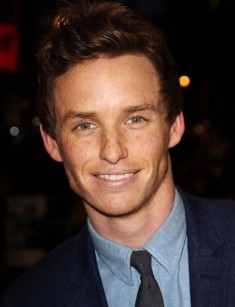 Eddie Redmayne is an actor and model from Britain.

The actor has won many prizes including the Academy Award for the role of the famous scientist in the movie The Theory of Everything.

The would-be actor was born on January 6, 1982. His father, Richard, was a financier, and the mother, Patricia, owned a business in cargo transportation. Eddie was the second child in the family. The three brothers were educated in Eton. Prince William went to the same class as Eddie. The future Prime Minister of Great Briton studied with Redmayne’s elder brother; the younger brother was a classmate of Prince Harry.

The young man found the love of theater in himself when he watched Shakespeare’s A Midsummer-night's Dream. He put his inspiration to practice and joined the theater club in High Wycombe.

Eddie combined his studies in Eton and extra classes: music, art, choir. As a student, Redmayne personified a female character for the first time.

After the young man graduated from Eton, he continued his education in Trinity College, Cambridge, where he studied History of Art. The major required in-depth research of the French and English history of art in 19-20th centuries.

Young Redmayne began to work part-time as a model to earn his pocket money. In 2002, the theater debut took place. A casting manager from Eton asked his Cambridge colleague to find a talented student actor who would play Viola in Twelfth Night. Dormandy recommended Redmayne.

The beginning actor went to the auditions and succeeded. The college administration withdrew Eddie from visiting classes for six months, but the young man had to catch up and study in his free time. The next term, Eddie came back to his studies; he was writing his final paper and absorbing the knowledge necessary for the future final exams.

The student’s peculiarities (he cannot tell the difference between red and green) did not prevent him from writing the final research paper on Yves Klein and his usage of blue.

Redmayne finished Trinity college with honors and became one of the best graduates. By that time, Eddie had decided what he was going to do in future, but the young man had a year to think it over and make sure he was right.

Outside the college, Eddie Redmayne’s theater career was not perfect at first. As the actor said in his interviews, the father, a rational financer, showed his son the statistics: how many young actors achieved success. The number was small. Initially, Redmayne could not apply his acting talent to practice as well; he worked as a waiter and bartender. Nevertheless, he got lucky pretty soon.

In a while, the actor received the Critics' Circle Theatre Award as the outstanding newcomer and the best secondary role in The Goat, Or Who Is Sylvia? The role of Edward Albee also brought him the nomination for the Olivier Awards.

In 2005, Eddie Redmayne debuted in cinematography: he appeared in the series Elizabeth I. The young actor had the chance to collaborate with the movie stars Helen Mirren and Jeremy Irons; he was impressed. Later on, the artist realized his talents in many TV projects, movies, and series. In 2008, Redmayne started working with the lux brand Burberry. The photos of Eddie were printed in Vanity Fair in the column with the most stylish men.

Movies opened the road to cooperation with Hollywood stars. For instance, Elizabeth: The Golden Age gave the opportunity to co-star with Cate Blanchett; in The Good Shepherd, the actor collaborated with Matt Damon and Angelina Jolie.

The drama Savage Grace brought the lead role; Julianna Moore also starred in the movie. Eddie personified an extraordinary character: a troubled teenager who eventually murdered his mother. At the same time, Redmayne joined the cast of Powder Blue where he played a mortician Qwerty Doolittle.

Further on, the actor played in the costume drama The Other Boleyn Girl; Natalie Portman, Scarlett Johansson, Eric Bana, and Kristin Scott Thomas played the main characters. Redmayne was also engaged in another historical project, Tess of the d'Urbervilles.

The artist was not afraid of experiments; he appeared in the Japanese movie The Yellow Handkerchief and the British playwright Stephen Poliakoff’s drama Glorious 39. The man gained a role in the dark German thriller Black Death about the Middle Ages in Europe, plague, and inquisition. The adventure series The Pillars of the Earth produced by Ridley Scott also starred Eddie.

The lead role in My Week with Marilyn was an interesting experience: the actor played a beginning assistant to a director who managed to find a common language with a Hollywood star and help her fight her depression. Michelle Williams became Eddie’s stage partner.

In 2011, Redmayne starred in the comedy Hick; the movie told the story of a young woman who escaped to Las Vegas from her drunk parents. Chloë Moretz took the lead part.

The actors performed their vocal parties in the musical: the directors did not want to invite professional singers to save the holistic atmosphere and acting. This decision was appreciated by movie critics and the audience.

In 2014, the fateful premiere of the movie The Theory of Everything took place; Redmayne played the famous physicist Stephen Hawking. The move made the director James Marsh and the whole cast popular. This melodramatic movie tells the story of the scientist and the student Jane Wilde who fell in love with him.

As expected, the role brought Redmayne the long-awaited Academy Award; the actor also won the Golden Globe and BAFTA.

The new offer followed the Oscar-bringing movie: Eddie Redmayne played in the movie The Danish Girl based on the novel by David Ebershoff. It is the story of the first man who decided to have the sex reassignment surgery. The main character is an artist’s husband. She asked the man to sit for her new painting which proved to be popular in the artistic circles. The woman continued to portray her husband in the image of a woman and created a series of paintings. Suddenly, the sitter realized his worldview changed: he felt happier and freer when he personified a woman.

The actor personified a feminine man authentically. He lost 7 kg. during the movie shooting. His work was brilliant: Redmayne showed his fascinating talent and professional skills. To play in his character, Eddie spent two months among transgender people. He discovered that gender and sexual orientation were not related and saw the life of the people who suffered from gender dysphoria.

In 2015, the artist appeared in the fantastic blockbuster Jupiter Ascending by the Wachowskis. The movie was made a year before the premiere, but the additional work on special effects and the desire to have a bright promotional campaign resulted in the delay.

Eddie Redmayne played the main villain figure: Balem Abrasax, the owner of the Earth. His family had been ruling the planet for centuries until a young woman with the perfect DNA code appeared; she was Balem’s reincarnated mother and the lawful heritor of the planet. Mila Kunis played this role. Under these circumstances, the Abrasax family tried to make the young woman reject her rights or kill her.

In 2016, the movie Fantastic Beasts and Where to Find Them came out; Eddie played one of the lead parts. Katherine Waterston and Alison Sudol became his stage partners.

Fantastic Beasts was based on Joanne Rowling’s novel. It is the spin-off of the book series about Harry Potter: the story is set 65 years before those events.

Among other things, the movie raises the topic of social inequality through the plot about the persecution of magicians. The radical organization, the New Salem Philanthropic Society, is engaged in their harassment: its members urge to destroy magicians, and the latter had to keep their abilities secret and remain in the shadows.

The next year, the actor appeared in the movie sequel. Fantastic Beasts: The Crimes of Grindelwald is set a year after the events of the first movie. Newt and other characters have to oppose the evil magician (Johnny Depp) whose personality was revealed at the end of the first movie. Young Albus Dumbledore (Jude Law) joined the main characters.

This character appeared in Harry Potter books and movies as the aged magician and the headmaster of Hogwarts. The movie premiere is scheduled for November 16, 2018.

According to Joanne Rowling, there will be five movies in the Fantastic Beasts universe.

Eddie Redmayne is happy with his wife, Hannah Bagshawe. The couple met in 2012; in 2014, they announced they were engaged. The wedding ceremony took place on December 15 in Somerset. The newlyweds and their nearest and dearest celebrated in the Babington House Hotel; the bride went there by ship.

Eddie and Hannah were walking the road decorated with candles. As the actor said later, it was Bagshawe who organized everything, and he did not have to worry: the young woman did it perfectly.

The actor does not make his personal life public. Unlike the majority of his colleagues, he has no Instagram page, and there are few photos of Eddie and his family on the Internet.

Jamie Dornan who starred in 50 Shades of Gray is Redmayne’s close friend; the actors used to rent an apartment together when they worked in Los Angeles.

Eddie and Hannah have two children. In June 2016, the daughter Iris Mary was born. Two years later, the son Luke Richard was born.

In 2018, Eddie Redmayne starred in the thriller The Last Days of Night based on Graham Moore’s script. The actor also voiced Dug in Nick Park’s animated movie Early Man.

The adventure thriller The Aeronauts based on the true story of aerostatics in the early 19th century is being post-produced. Eddie Redmayne and Felicity Jones played two researchers who reached the upper atmosphere on a hot-air balloon. As the producer of the project emphasized, the actors performed all the tricks themselves.

Eddie will play a maniac in the thriller The Good Nurse and appear in the historical movie The Last Days of Night. 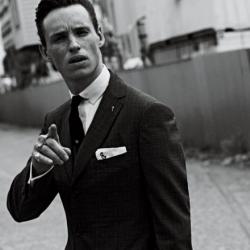