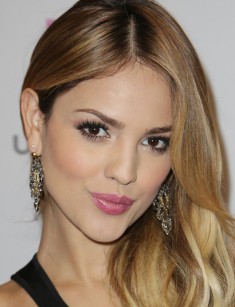 Eiza González is a Mexican actress and singer who became famous at 16, when the youth series Lola, Once Upon a Time came out. The international recognition happened later, after the American horror From Dusk till Dawn: The Series. Besides, González is known as a singer.

Eiza was born in a Mexican town Caborca, Sonora, Mexico. The famous supermodel Glenda Reyna was the girl’s mother. The father, Carlos González, died in a crash when his daughter was only 12. The tragedy influenced the young woman’s life: she became shut-in, and it was difficult for her to communicate with other people. González started comfort eating. The situation changed only three years later. Eiza has a brother from the parental side; he is 12 years older.

The actress’s hometown is close to the borderline between Mexico and the United States; many schools specialized in English. Eiza González attended such schools: Edron Academy and the American School Foundation. She not only learned English at a high level but also picked up some Italian.

At 14, Eiza entered a theater college, Televisa’s Centro de Educación Artística. Three years later, she received the first role in a TV series. As she gained some experience, the young woman went to New York to study acting at Lee Strasberg Theatre and Film Institute.

At that time, González visited America to improve her skills; she came back home and continued to participate in Latino-American projects. In 2013, she realized that she wanted to develop her career and collaborate with Hollywood companies. Thus, she settled in Los Angeles.

Eiza González debuted on the screen at 16: she appeared in Lola, Once Upon a Time, the remake of the famous Argentinian TV novella for teenagers Floricienta. The young actress successfully played the lead role of a teenage girl. It is peculiar that the project was musical: Eiza had to play and sing. After the series was broadcast, the young actors had a large tour in the country which strengthened the positions of González in her country. Later on, the artist appeared in many commercials including Always, Avon, and Cosmopolitan.

Soon, Eiza appeared in the crime drama Killer Women; she got the role of the antagonist, a teenage girl Gabriela. The Argentinian musical comedy Dream with Me followed; the actress played two roles: an ordinary girl Clara Molina and her alter-ego nicknamed Roxy Pop. To take part in the project, González spent a year in Buenos Aires and visited her nearest and dearest only on holidays.

Further on, the artist starred in several local projects; the melodrama True Love was the largest among them. In 2014, she joined the cast of the American youth horror series From Dusk till Dawn. The role of the evil vampire Santanico Pandemonium made Eiza González globally famous. The success brought her new projects: the Mexican comedy Almost Thirty, the American fantastic musical Jem and the Holograms, the Columbian thriller God's Equation, and the British family comedy All Hail the Squash Blossom Queen.

When the series Lola: Once Upon a Time was shot, the album Lola... Érase Una Vez containing the songs from the series came out. Eiza González performed the majority of them. The same year, she RBD Kudai and recorded the single “Estar Bien” that encouraged young women to fight against anorexia.

The soundtracks were successful. Eiza signed a contract with EMI and worked on her debuting album at the studio. Contracorriente was released in Mexico and the USA and proved to be popular in both countries. In Mexico, it was number 13 among 100 best albums; in America, the album reached number 25. "Mi Destino Soy Yo” became the most popular song.

The musical movie Dream with Me also gave fans the chance to enjoy Eiza’s singing. The double album Sueña Conmigo with the soundtracks was presented, and González participated in a long tour.

In 2012, the woman’s second solo album, Te Acordarás de Mí, was released. Its achievements were more moderate: the main song became number 24 in the Mexican chart, and the album reached number 66. Te Acordarás de Mí did not get into music charts in other countries.

In 2010, rumors had it the young actress was dating the popular Mexican singer Alejandro Fernández. The speculations were spicy because of their age difference: Eiza is 20 years younger than Fernández.

In a year, the woman began to date the Mexican businessman Pepe Díaz. They spent two years together, but González left him for the Australian actor Liam Hemsworth. However, that relationship ended two months later.

Later, the Mexican beauty was seeing the Argentinian actor and model Sebastian Rulli and the Portuguese soccer player Cristiano Ronaldo.

Many fans follow the artist on Instagram and emphasize her profile looks stylish. Some Internet portals claim that Eiza has the best Instagram among Hollywood stars.

In 2017, Eiza played one of the lead roles in the action movie Baby Driver. It is the story about a young man nicknamed Baby. He is a talented driver who has to work on the gangster Doc, the head of a band. When Baby meets a waiter Debora, he wishes to leave the game. He has to participate in the last assignment.

Ansel Elgort, the star of the movie The Fault in Our Stars, played the main character, Baby; Lily James got the role of Debora. González and her screen husband, Jon Hamm, were the band members. Kevin Spacey, Jamie Foxx, and Jon Bernthal starred in this project as well.

December 2018 brought the drama Welcome to Marwen starring Steve Carell, Eiza González, Leslie Mann, and Diane Kruger. The main character, Mark Hogancamp, had to face a street assault. The man manages his trauma and undergoes a “doll therapy”: he builds a World War II dollhouse in his yard and puts there some toys which are similar to the people from his past.

The premiere of the fantastic Japan-American movie about a cyborg woman Alita: Battle Angel will take place soon. Eiza played Nyssiana. The creators of the movie presented it at CinemaCon 2018.

Together with Emma Roberts and Milla Jovovich, the actress will appear in the fantasy movie Paradise Hills which is shot in Barcelona. Besides, Alexandra McGuinness’s drama She's Missing staring Eiza González and Lucy Fry is upcoming.

Later, the actress will play in the action movie Cut Throat City about four friends who return home after Hurricane Katrina. They face work-related problems and go to a local gangster who, in his turn, hires them to rob casinos in the city center. Wesley Snipes, Katerina Graham, and Terrence Howard will also appear in this project. 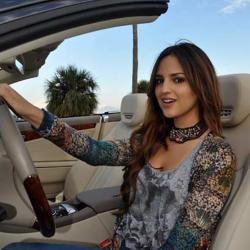