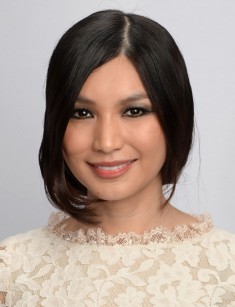 Gemma Chan is an English actress, who during a long time mainly played roles in the TV series, such as Humans, Bedlam, Sherlock, Brotherhood and others. But later Gemma Chan began to have more and more full-length movies in her acting career, among them Fantastic Beasts and Where to Find Them, London Fields and Stratton. Moreover, she has made a brilliant career in the model business and on the theatrical stage.

Gemma Chan was born in the capital of Great Britain, but she grew up in the small ancient town of Sevenoaks, situated in Kent County. The girls’ parents came from Asia. Her mother was working as a pharmacist. Being a little girl, she came from China with her sister and parents. The girl's father was a skilled engineer who emigrated from Hong Kong already being mature.

Gemma attended Newstead Wood School and received the classical music education on the class of the violin and piano. But despite the fact, Chan since childhood demonstrated creative skills she entered the University of Oxford. Also, it's worth noting that here she became one of the best students and due to this she was offered to join the Slaughter and May lawyer company well-known in England. But by that moment the girl has already become conscious of the fact that she wanted to become the actress.

She didn’t accept this tempting offer and went to London and entered the popular school of the acting skills at the drama theatre in the capital. Earlier, Colin Firth, Pierce Brosnan, and other British celebrities became the graduates of this studio. To pay for expensive education and necessary expenses, the purposeful and initiative girl decided to work for the model agency. She not only appeared in the advertisements of Nivea, Nokia, and Reebok brands but also took part in the reality show Models of the Runway in which she was included to the best three.

In 2008 Ms. Chan got the diploma of the graduate of London Drama Center and had her debut on the theatrical stage. The popular performance Turandot became the first play of the actress. After that, she was included to the cast of at least one n she annually is the cast of at least of one repertory play. During these years the actress appeared on the stage of the most prestigious London theaters.

Gemma Chan for the first time appeared on the TV screen in the feature movie in 2006 in the episodic role of the teenage horror movie When Evil Calls. And after the completion of the studies in the drama studio, she appeared in the series Doctor Who, Sherlock, Secret Diary of a Call Girl. The actress has gained her first popularity due to her role in the gripping psychological drama Exam after which there were released the melodrama True Love, the social series Dates, and the television comedy Brotherhood.

In 2011 the actress took part in the series Fresh Meat. This series tells a story about the teenagers who have been admitted to the university. Far from their families, the guys will learn who they are actually.

The Russian-American thriller Jack Ryan: Shadow Recruit has had considerable success. In this picture, Gemma cooperated with the Hollywood stars Chris Pine, Kevin Costner, Keira Knightley and with the Russian actress Elena Velikanova. After this role, the actress was noticed by the representatives of the direction of the British People TV project and offered the actress the primary role of Anita in this high-rate fantastic drama.

In 2016 the spectators saw Gemma Chan in the picture of Harry Potter’s Universe under the title Fantastic Beasts and Where to Find Them in which she performed together with Eddie Redmayne. The girl received the role of the Chinese magician called Madam Ya Zhou.

Gemma Chan’s personal life is not so expressive and saturated as at other movie celebrities. The girl has been in relations with her beloved man for a long time. The British comedian and actor Jack Whitehall is the elect of the actress. The actor is also known because he has been considered to be one of the major candidates for the role of Harry Potter before Daniel Radcliffe appeared at the audition.

The actress still lives in England and isn’t going to move to Hollywood. She leads active social life: she is seriously engaged in the movement on the human rights’ protection. On the 60th anniversary of the Declaration of Human Rights, Gemma presented the author's documentary movie under the title Amnesty and became the official witness in Old Bailey court in the case against the assaulters of mass slaughter near London Putney Bridge metro station in 2013.

In December of 2017, it became known that already in September Gemma, and Jack had broken up because of their busy working schedule. Though the lovers tried to save their relations in all possible ways. The couple lived together in Whitehall’s apartment. After the parting actress returned to her flat.

At present little is known about the girl's personal life. According to the photos on Instagram, she doesn't have a boyfriend or husband. Though, it's possible that the actress keeps this sphere of her life in a secret from the public. The actress doesn’t have children.

In April of 2017, the fighter under the title Stratton came out on the screen. In this movie, Gemma received one of the significant roles. On the movie set, the actress played together with Dominic Cooper, Tom Felton, Austin Stowell, and other movie artists. Chan performed the role of Aggy.

And in June of the same year, the spectators enjoyed the girl's voice in the fighter Transformers: The Last Knight. However, Gemma's character - Quintessa – appeared only in the scene after the credits. Quintessa is a goddess who has created the transformers and Cybertron. She will appear as a main villain in the fifth part.

As an actress of voicing Gemma will take part in the animated mini-series Watership Down which was released in 2018. Chan will voice over the character of Dewdrop.

The actress will perform one of the significant roles in the thriller London Fields which the spectators will see in September of 2018.

According to the plot the clairvoyant Nicola Six lives with the presentiment of the inevitable death. She couldn't hold, and the girl begins to have love affairs with three men at the same time even though she knew that one of them would soon become her murderer. On the shooting stage, the girl has performed together with Amber Heard, Cara Delevingne, Billy Bob Thornton and others.

The release of the series Mary Queen of Scots is set for September of the same year. The Russian spectators will see this series in January of 2019. Mary Stuart was crowned in Scotland when she had hardly turned one year. At the age of sixteen the girl became the Queen of France, but in a short time, she became a widow. Then Mary returned to Scotland to rule the people. She had to improve her relations with the cousin Elizabeth for better or to remove her relative from the throne. Saoirse Ronan has received the role of the Queen of Scotland. Margot Robbie will perform the role of her cousin. Gemma Chan will transform into the character of Elizabeth of Hardwick – the trusted person of Elizabeth.

In 2018 there appeared the information that the actress joined the cast of the expected movie on Marvel comics under the title of Captain Marvel. The star was offered the role of Dr. Minn-Erva who turns out to be a spy and geneticist from Kree - Minn-Erva. She has arrived on the Earth to develop the race with the help of unusual genetics of Mar-Vell, the hero of Kree. The Oscar-winning Brie Larson will perform the major character Captain Marvel. Carol Danvers will receive the abilities from Mar-Vell who will be played by Jude Law.

The movie will be premiered in March of 2019. 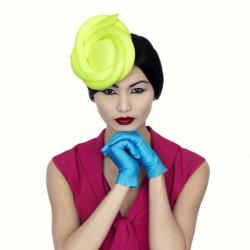