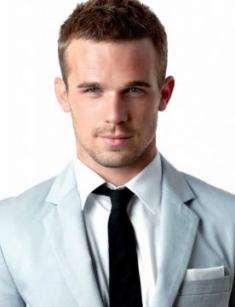 Cam Gigandet is a Hollywood actor, star of the movie Twilight, tapes Broken Vows and The Magnificent Seven.

Cameron Joslin Gigandet was born on August 16, 1982, in Tacoma (Washington). Jay Gigandet`s father owned The Rock pizza franchise in the North-West of the country and his mother Kim was a housewife and devoted her free time to raising children. The actor has an elder sister Kelsie, who is a hair stylist. His family lived in the small town of Auburn for several years.

Cam was fond of swimming and karate as a child. The young man became the owner of a brown belt in karate. But Cam was engaged in acting after graduating from high school in 2001. Gigandet moved to California, where he attended Santa Monica College.

Teachers and groupmates valued Cam's acting abilities and the talent of the young man was noticed by filmmakers soon.

Although Cam Gigandet dreamed of stage, he had the acting debut on the TV screen. In 2003, the charismatic guy was invited to the popular TV series CSI: Crime Scene Investigation. The first role was episodic but gave an excellent start to his career. The audience saw the performer in the role of Daniel Romalotti Jr in The Young and the Restless a year later. The first movie work, where the TV star played a significant role, was a short thriller Mistaken.

Gigandet had TV projects in his filmography. The young actor became very famous after the role of Kevin Volchok in the popular TV series of Josh Schwartz`s The O.C. In 2005, the audience also saw the actor in the drama series Jack & Bobby. There was a pause in Cam's career after this role.

He had a minor role in the sports comedy Who's Your Caddy?. The successful stage in the creative biography of the artist began. Cam was invited to participate in the youth drama Never Back Down soon, where his colleagues on the set were Sean Faris and Amber Heard. The TV star spent six months for training Krav Maga. Critics paid attention to the tape. So, Cam Gigandet was awarded for the MTV Movie Awards in the nomination Best Fight in 2008.

His participation in the tape Twilight was crucial. The actor played the blond vampire-seeker, James. He got a minor role but it provided the performer a good fee, worldwide fame and the army of fans.

The career of Cam Gigandet developed rapidly. In 2010, the TV star was approved for the leading roles in the tape Five Star Day. Then Gigandet appeared in the American comedy Easy A. His partners on the screen were Emma Stone, Penn Badgley, and Amanda Bynes this time.

His filmography was supplemented by a thriller on the student theme The Roommate. The movie was about the failed friendship of two students Sarah and Rebecca (Leighton Meester, Minka Kelly), one of them began to kill the close people of the other girl. Gigandet played the role of a friend of Sarah, Rebecca wanted to kill him too. The tape became the leader of the first-weekend rental.

The performer starred in the thriller the Priest, the tape tells about the fight against vampires. The image of Cam was not as fantastic as the images of his colleagues, Paul Bettany and Karl Urban. The actor played the Sheriff of the provincial police station. A great honor for Cam Gigandet was the participation in the crime drama Trespass because Nicolas Cage and Nicole Kidman played the main characters.

The incredible success of the actor was after the release of the musical Burlesque, where his colleagues were Christina Aguilera and Cher. It is known that other heroes of the movie Twilight, Taylor Lautner, Robert Pattinson and Kellan Lutz, competed for the participation of the role of the waiter Jack. The musical Burlesque received the love of the public and became the winner of the Golden Globe Awards.

In 2014, Cam Gigandet accepted the offer from the makers of the thriller Sitter Cam, where he played one of the spouses, who decided to follow the behavior of a young nurse during an absence. Laura Allen played the role of the wife of his character and India Eisley took part in the filming of the movie too, she is known for her work in the horror movie Underworld: Awakening.

Cam Gigandet is not only successful in his acting career. He is happy in his own life. The artist lives in civil marriage with Dominique Geisendorff the American actress, who played in the horror tape Beneath the Surface.

The couple had their first child, the daughter Everly Ray, who was born in 2009. The son Racker Redley was born four years later. They had their daughter Armie Heartly. The actors became parents on November 30, 2015, for the third time. Gigandet. Young people are not in a hurry to tie the knot, despite their strong relationship. The TV star refers to his children with tenderness. There are photos from the official account and fan page of Gigandet on Instagram, where he is together with his children. Cam prefers to communicate on "Twitter."

The prefers sports in his spare time. Cam enjoys surfing, baseball, golf and skiing. The companion of his life supports Cam in everything but she does not forget about self-realization. The girl makes decorations for the house, dream catchers, Dominique earns well. Geisendorff is the owner of a shop of esoteric goods.

The celebrity is in no hurry to agree to all the offers from the agents of movie studios because he appreciates his time with his family. So, there are 2-3 projects in a year with the participation of Cam.

In 2016, the artist pleased his fans with the appearance in the Western The Magnificent Seven. The tape is about the defenders of the citizens of the American town from a gang of robbers. The actor played one of the heroes of the band.

Cam got the primary role in the thriller Broken Vows. The plot of the tape is built around a relationship of the bride of the hero and the tragedy. Jaimie Alexander and Wes Bentley were involved in the filming of the movie too. Gigandet took part in the crime series Ice, in which he played one of two brothers, the heirs of the diamond corporation, protecting the business from the competitors, speculators and even intelligence agents.

The artist appeared in the dramatic image of a young man in the tape The Shadow. He does not understand the difference between wild dreams and reality any longer. Dr. Reese (Jonathan Rhys Meyers) helps him to understand himself. Cam Gigandet had to defend the base from attack militants in the blockbuster The Base.

Cam Gigandet did not star in 2018, making a creative break. Cam Gigandet has a net worth of $4 million.