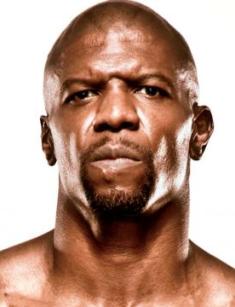 Terry Crews is a famous American actor and sportsman who rose to prominence after the appearance in Old Spice TV commercials and the role of Hale Caesar in The Expendables series.

Terry's key features that helped him to attract a lot of fans are talent and a bright appearance. His rippling muscles are a source of particular pride for Crews, who has become a symbol of masculinity and beauty. The number of actor’s fans doubled thanks to his bodybuilding program and tutorial videos.

Terry Alan Crews was born in the middle of the summer of 1968 in the state of Michigan. The future star of The Expendables spent his childhood and youth in the city of Flint, which is 100 kilometers from Detroit.

The parents of Terry Crews were not connected with the world of cinema. But from his early years, the actor stood out among his peers. The boy distinguished himself with excellent acting skills and received an art scholarship after graduating from Flint Southwestern Academy in 1986.

Terry Crews could have developed acting and sports careers. The young man could not choose the right path for a long time. The art scholarship made Crews attend art classes at the Interlochen Center for the Arts, and after graduating from the center, Terry entered Western Michigan University.

The tall (his height is 6.26 ft. (191 cm), and the weight is 244.71 lbs. (111 kg)) man was noticed by a university football coach, and soon Crews became a key player of the WMU football team. The athlete won Championship after Championship, and upon graduation, he received an invitation to the San Diego Chargers.

For six seasons, football fans saw Terry Crews playing for the Los Angeles Rams, the Washington Redskins, and the Philadelphia Eagles. But at the age of 30, the American quitted the sport to pursue an acting career.

Terry Crews made his screen debut in the television show Battle Dome in 1997. The impressive appearance of the muscular actor was not an obstacle to funny comedy images. Terry Crews became associated with comedy characters, playing supporting roles in the film Friday After Next and Serving Sara with Matthew Perry and Elizabeth Hurley in the lead roles.

The actor rose to prominence in 2004, portraying Latrell Spencer in the comedy film White Chicks. Viewers appreciated both Terry's acting skills and the embossed biceps of the handsome dark-skinned man.

The same year, viewers saw Crews in the comedies Starsky & Hutch and Soul Plane. The actor was gradually becoming more in-demand, acting in 3 or 4 movies per year. 2005 brought him starring roles. Terry Crews co-starred with Adam Sandler in the comedies The Longest Yard and Click.

From 2005 to 2009, the actor delighted his fans with his role in the series Everybody Hates Chris, in which Terry played Julius Rock. It was followed by the dystopia comedy Idiocracy, in which Terry brilliantly portrayed President Camacho, and the sparkling comedy The Benchwarmers, starring Rob Schneider.

In February 2007, the comedy-drama Norbit premiered, in which comedian Eddie Murphy played the leading role. Terry Crews pleased fans with the character of Big Black Jack Latimore. The project grossed $159 million at the box office against a production budget of $65 million.

But Crews became really famous in 2010 after the release of the action movie The Expendables, directed by Sylvester Stallone. The image of the insane weapons specialist, Hale Caesar, made Terry a Hollywood star. The all-star cast of the project did not give viewers and film critics any choice, and the movie was warmly welcomed.

The actor worked with Sylvester Stallone, Jason Statham, and Dolph Lundgren in The Expendables. In 2012 and 2014, the project’s spinoffs were released in which Liam Hemsworth, Jean-Claude Van Damme, Wesley Snipes, and Antonio Banderas also joined the cast of The Expendables group. Terry Crews returned to the already favorite character, Hale Caesar.

Another significant project of 2014 is Frank Coraci’s comedy Blended, in which Adam Sandler and Drew Barrymore starred. Terry played a prominent role of Nickens, making the movie even more exciting.

Coraci recalled the talented actor the following year when he shot the Western comedy The Ridiculous 6. This time, Terry Crews played the leading role in the film, alongside Adam Sandler, Rob Schneider, and Jorge Garcia. The name of the comedy is the allusion to the hit movie The Magnificent Seven.

Terry Crews married at the age of 20 when he was a university student and built a meteoric football career. Rebecca King had no idea that her husband would become a sports star, and then a Hollywood celebrity.

Unlike his colleagues, Crews did not change when he reached fame. He is faithful to his wife and family. Rebecca gave birth to five children: four girls and a boy.

The issue of faith is no empty boast for Terry. The actor is a member of the faith community church in West Covina. The family has settled in Altadena, California.

Every morning, Terry Crews does sports and strength exercises. He starts training at dawn, at 4-5 in the morning, due to a busy schedule. But the result is evident because Crews remains the standard of masculinity and beauty for fans, although in the summer of 2018 the star will celebrate his 50th birthday.

There were ups and downs in the actor’s life when he was desperate for the money. Crews shared his secret on Instagram. He carries his photo in his wallet, which helps him control expenses.

"I keep this pic of Terry Crews in my wallet so I can see it when I'm ... I'm about to waste money on things I don't need."

His subscribers suggest that the photo is a reference to the TV series Everybody Hates Chris, in which Terry's character, Julius, is incredibly frugal.

In November 2017, Crews admitted that he was sexually assaulted by agent Adam Venit when he collaborated with the talent company WME. Terry wrote about it on Twitter, and the eminent agent who worked with Adam Sandler, Eddie Murphy, Sylvester Stallone was immediately fired.

Nowadays, Terry Crews has a net worth of $20 million.