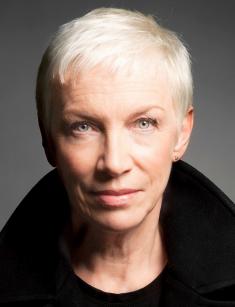 Annie Lennox is known as a solo singer and the vocalist of the group Eurythmics. The most prestigious American prizes marked her talent: Grammy, the Academy Award, the Golden Globe. The musician has won eight BRIT Awards; only Robbie Williams, Adele, and Coldplay received more.

Annie Lennox was born on December 25, 1954, in Aberdeen, Scotland, into the family of Dorothy Farquharson (née Ferguson) and Thomas Allison Lennox.

There are many gaps in the singer’s early life story. Annie showed the interest in music in her childhood; at the age of 17, she enrolled at the Royal Academy of Music in London and learned how to play the flute, piano, and harpsichord in the following three years. As a famous artist, Lennox told Jonathan Ross in Friday Night that she wanted to run away home in her first day at the academy: the teenage girl imagined London as a romantic city, but the reality was cruel.

The family was not wealthy, and Annie had to work part-time; she used to be a waitress, a bartender, and a salesperson in a butcher’s shop.

Hard work gave few opportunities to enjoy classical music; the young woman was thinking about what she would like to do with her life. Despite much stress and ordeals, Annie felt attracted to art. She started performing in pubs with the local group Windsong.

In 1976, Lennox played the flute in Dragon's Playground, the band that participated in the Scottish talent show New Faces auditions but failed to go to the next stage. In 1977-1980, the singer worked in the pop group The Tourists and met David Stewart, the future colleague.

Eurythmics, the duet with David A. Stewart, turned out to be the starting point for Annie Lennox. The musicians began to collaborate in 1980 and satisfied any picky listener with their synth-pop songs; the music encouraged to dance, and the woman’s sincere, touching vocal was the group’s trademark.

Eurythmics presented dozens of hits; “Sweet Dreams (Are Made of This)” from the 1983 album under the same title was the most popular among them. The music video showed gold and platinum disks hung from the walls; they foretold the future success of the track. Lennox looked androgynous and bore some resemblance to David Bowie. By the beginning of 2019, the video had more than 300 million views on YouTube.

The group’s “sweet dreams” came true: the hit reached the second position in UK Singles Chart and topped US Billboard Hot 100. In 2003, Rolling Stone put “Sweet Dreams” to number 356 in 500 Greatest Songs of All Time. Today, Annie Lennox continues to sing the hit in her solo concerts.

The original version of “Sweet Dreams” became the lead theme in the movies Bitter Moon (1992) by Roman Polanski and Striptease (1996) by Andrew Bergman; Demi Moore was dancing to this song in the latter project. In 1996, Marilyn Manson presented the cover to the famous track; Eurythmics earned even more popularity.

The band is known for other works as well: “There Must Be an Angel (Playing with My Heart)” that topped British charts, “Here Comes the Rain Again”, "I Saved the World Today”. Overall, Eurythmics had nine albums released including Peace (1999) that came out after the group’s unofficial split-up.

In the 1990s, Lennox started her solo career. She debuted on April 20, 1992, at a concert in memory of Freddie Mercury, the frontman of Queen. Annie and David Bowie performed the song “Under Pressure” by Queen.

1992 brought the first solo Album Diva that immediately topped British charts; 1.2 million copies were sold in the UK; the American sales reached two million. The single “Why” is the most famous song; “Love Song for a Vampire” appeared in the 1992 movie Bram Stoker's Dracula by Francis Ford Coppola.

The second album, Medusa (1995), included cover versions of songs by Bob Marley, Neil Young, The Clash, and so on. Great Britain and Canada appreciated the new interpretation (the first positions in the national charts); in Austria and Italy, the album became number two; in Belgium, it was the third position. Lennox did not tour with other musicians’ songs. On September 9, 1995, she gave the only large concert in Central Park, New York; the recordings from the show were included in Annie Lennox Live in Central Park on DVD.

In 2003, the most successful album Bare came out: it reached number three in Great Britain and number four in the United States. Annie gave The Solo Tour to support the album. Once again, it was nominated for Grammy but failed.

The next year brought the Academy Award, though: the song “Into the West” that appeared in The Lord of the Rings: The Return of the King was named the best soundtrack. The composer Howard Shore and the London Symphony Orchestra contributed to the recording of the song. Later, “Into the West” won the long-awaited Grammy and Golden Globe Awards.

The fourth album, Songs of Mass Destruction (2007) included 12 emotional songs that, according to the musician, everybody could understand. 23 celebrities participated in the recording of “Sing”: Madonna, Celine Dion, Fergie, Dido, Pink, Shakira, the group Sugababes, and others. The collaboration aimed at collecting money for Treatment Action Campaign that worked on the prevention of HIV/AIDS in South Africa.

In 2009, the collection of best hits The Annie Lennox Collection with two new songs was released. The album remained in the top 10 of the British chart for seven weeks. In 2010, before the New Year, the musician presented A Christmas Cornucopia that included Christmas songs, such as “Silent Night” and “The First Noel”.

Lennox liked the idea of cover albums; in 2014, the presented Nostalgia, the collection of jazz and blues compositions she loved from her childhood: “I Put a Spell on You” by Screamin' Jay Hawkins, “God Bless the Child” by Billie Holiday, and “Memphis in June” by Nina Simone. The work topped US Billboard Top Jazz Albums and was nominated for Grammy.

Annie Lennox has been married three times. The German Krishnaite monk Radha Raman became her first husband. In her interview with Q magazine, the singer confessed that marriage was a mistake of youth. The couple spent together two years, 1984-1985.

The marriage to the Israeli movie producer Uri Fruchtmann was more successful, even though it started with a tragedy: Annie’s first child was stillborn. The next day, journalists tried to enter the woman’s room to interview her. That case made the singer keep her personal life secret. Annie and Uri had two more children, Tali and Lola.

On September 15, 2012, 12 years after the second divorce, the singer married Mitchell Besser who worked as a doctor. The husband inspired Annie to do charity work related to HIV/AIDS. In November 2013, Lennox won the Music Industry Trusts Award not only for her music achievements but also the active social work and women’s rights protection.

Annie Lennox is an icon in the LGBT community along with Madonna and Morrissey. She is an agnostic and calls herself “a global feminist”.

In fall 2018, the biopic A Private War was premiered; it was the story about a military correspondent Marie Colvin (Rosamund Pike). Annie Lennox’s song “Requiem for a Private War” became a soundtrack for the movie.

Overall, the singer has stopped her career and concentrated on social activities. In October 2017, she organized the charity fund The Circle supporting women all over the world who could not receive an education because of gender discrimination.

“I am proud to call myself a feminist and stand in solidarity with everyone who understands the vital need for change in attitudes and behaviors towards women and girls”, said the artist.