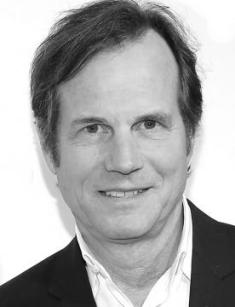 This American actor was nominated for the Golden Globe three times and twice for the Satellite Awards. He received Screen Actors Guild for Outstanding Performance by a Cast in a Motion Picture and the Saturn Award as Best Director. In 40 years of working in the film industry, Bill Paxton starred in dozens of movies which were nominated for the most significant film award in the world - the Academy Award.

The actor worked on the set of projects directed by James Cameron and Ron Howard. His work on the cult films The Terminator, Aliens, Apollo 13 and Titanic made the Hollywood actor famous. The central role in the drama television series Big Love brought Bill to the top of the Hollywood hills.

Bill Paxton was born in Texas in May 1955. He spent his childhood and adolescence in Fort Worth, Texas, which is a part of the Dallas–Fort Worth–Arlington metropolitan area. The future actor was brought up in the family of a housewife and confirmed Roman Catholic mother and an entrepreneur father, who was engaged in the industrial wood trade. His father was connected to the film industry: John Lane Paxton was an amateur actor who starred in extras.

Bill was no different from his peers. The boy went to school and had reasonably average grades, played ball, and hung out with his friends.

The most striking and horrific memory from Bill Paxton's childhood was the assassination of John F. Kennedy, which happened in front of the 8-year-old boy. His father took his wife and son to Dallas, where the crowd came out to greet the leader of the United States. John lifted the boy above the crowd and put him on his shoulders for Bill to see the President better. What happened was forever etched in the memory of young Paxton.

The photo of smiling Bill raised above the crowd of adults is still on display at the Sixth Floor Museum at Dealey Plaza in Dallas.

Paxton did not dream of having a job on the shooting set in his childhood nor his teenage years. After graduating from school, 18-year-old Bill went to Los Angeles, where he worked as a valet. Three years later, he found a cushy job as a costume designer in the team of "The Pope of Pop Cinema," Roger Corman. Watching the actors work on the set, Paxton felt admiration, inspiration, and even envy.

Soon Bill Paxton had the opportunity to walk in the actor's shoes. In the mid-70-s, Jonathan Demme (the director of the Academy Award-winning movie, The Silence of the Lambs) entrusted the 20-year-old costumer a cameo role in his project Crazy Mama. The director praised Paxton and he, inspired by the successful debut, went to New York.

In the Big Apple, the young man found the famous American acting teacher, Stella Adler. She taught him the essential acting skills that would become the ground for his future career.

Bill Paxton returned to the "dream factory" in the late 1970s and went through dozens of auditions.

In 1981, the aspiring actor got an offer to play a cameo role in the comedy movie Butcher, Baker, Nightmare Maker directed by William Asher. Three years later, came out the action movie The Terminator, which was Cameron's second directing project. In the same year, Bill worked together with Michael Paré on the film Streets of Fire. Besides, Paxton participated in the filming of the 1985 movie, Commando. In all these movies, Bill played cameo roles.

Starting from 1990, Bill Paxton began to go up the path to glory, getting supporting roles in various famous movies. The made-for-television drama movie An Early Frost directed by John Erman was the first of major television and feature film devoted to the topic of AIDS.

The project received the Golden Globe Award for Best Supporting Actress in a Series, Miniseries or a TV Movie. It also won the Peabody Award and got fourteen Emmy nominations. Bill Paxton appeared on the set together with such Hollywood stars as Sylvia Sidney and Ben Gazzara.

In 1986, the actor's fame grew rapidly: Paxton got memorable parts in high-rated television series Miami Vice and Fresno. But the main success of the year proved to be the third film of Cameron, the science fiction blockbuster Aliens, in which Bill played Private William Hudson.

Since the mid-1980s, the audience saw the actor in three or four new projects each year. In the 1990s, Bill Paxton appeared in Stephen Hopkins' science fiction movie Predator 2, and in the action adventure film Navy SEALs starring Michael Biehn and Charlie Sheen.

In 1993, the actor starred in an independent film. The mystical thriller film Boxing Helena created by Jennifer Lynch came out with Bill Paxton playing the central part. And in 1996, the premiere of the 6th project of Cameron, the "Golden" Hollywood action comedy movie True Lies, on the set of which the actor met Arnold Schwarzenegger for the third time in his career, took place. The part of cowardly Simon brought Bill Paxton another wave of fame.

In the mid-1990s, the audience enjoyed the acting of their favorite celebrity in the dynamic adventure drama movie Apollo 13, in which he brilliantly portrayed NASA astronaut Fred Haise. The Hollywood star also worked on the set of the American epic action disaster movie, Twister. The latter was a success at the box office and brought the creators $495 million.

In 1997, James Cameron again remembered his favorite actor, giving him a role in the drama movie Titanic, the film sensation of 1997-98.

In 1998, Bill Paxton played the central character in the dramatic thriller by Sam Raimi, A Simple Plan, together with Billy Bob Thornton. He also starred in the adventure film Mighty Joe Young, in which the audience saw the actor as Professor Gregory O'Hara. On the set of the project, he met Charlize Theron, Rade Šerbedžija, and Peter Firth.

The greatest success of the 00s for Bill Paxton was the drama, Big Love. It is an American television series about the Mormon family that practices polygamy. Paxton got the leading role of the head of the family, Bill Henrickson. Jeanne Tripplehorn, Chloë Sevigny, and Ginnifer Goodwin portrayed his wives. Amanda Seyfried played the daughter who did not share her father's views on polygamy.

The role of Henrickson brought the actor three nominations for the Golden Globe Award, as well as for the Satellite Award. The series was broadcast in the US and Canada and lasted for four seasons, receiving excellent reviews from film critics and a warm reception from the audience.

In January 2011, the premiere of Steven Soderbergh's action thriller movie Haywire took place. The plot of the motion picture revolves around a company that handles "black operations." On the set of the movie, the director gathered a star cast, and it determined the success of the project. Gina Carano, Michael Fassbender, and Channing Tatum played the leading roles in the movie. The supporting characters were also represented by such prominent Hollywood actors as Antonio Banderas and Michael Douglas, and of course, Bill Paxton.

In the same year, the audience got a pleasant surprise from the director Kevin Reynolds, who presented the mini-series Hatfields & McCoys about the bad blood between two families. Fourteen million viewers watched the motion picture. Kevin Costner and Bill Paxton played the fathers of the opposed families. The series was the most viewed in the history of cable television and received 16 Emmy nominations.

The actor's filmography was also enriched with the role in the post-apocalyptic thriller film The Colony, as well as his brilliant work on the science fiction action movie Edge of Tomorrow. On this motion picture, Bill Paxton worked together with Tom Cruise and Emily Blunt.

The last two projects that concluded the filmography of the Hollywood star was the techno-thriller film The Circle and the crime-thriller television series Training Day, in which Paxton played an essential character, Detective Frank Roarke. The premiere of the television series took place on February 2, and on the 25th day of the same month, Paxton was already dead.

Bill Paxton's net worth was estimated at $40 million at the time of his demise.

The actor was married twice. The first marriage with Kelly Rowan, registered in 1979, lasted only a year: the couple quickly realized the mistake and broke up.

He met his second wife Louise Newbury in the early 1980s in London: the couple met and talked on the bus. The love affair lasted two years and was crowned with a marriage proposal to which Louise agreed. The wedding ceremony took place in 1987. The couple had two children together, a son, James and a daughter, Lydia.

James Paxton made his debut in his father's directing project, the biographical movie The Greatest Game Ever Played about the dramatic US Golf championship. Shia LaBeouf and Stephen Dillane played the main characters, and Paxton Jr. got a cameo role.

61-year-old Bill Paxton died unexpectedly: he passed away in February 2017 in his native Fort Worth. The cause of death was a complication after heart surgery.

The farewell ceremony was held in Texas, but the closest ones of the star did not disclose the details of the funeral, asking to respect their privacy.