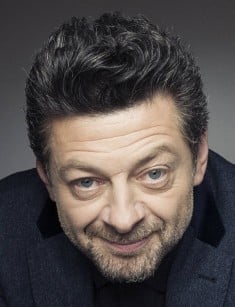 Andrew Clement Serkis is a famous theater and movie actor and also a film director, a voice actor and a pioneer in Motion Capture genre. The fans fell in love with the charming and radiant person due to his roles in the cult franchise Lord of the Rings, Planet of Apes and Star Wars.

Andrew Clement Serkis was born on the 20th of April, 1964 in the administrative region of the United Kingdom in London. He spent his childhood and youth in the small town of Ruislip which is in Hillingdon. The boy grew in the ordinary big family in which there were no creative people, and there were no actors. Except for Andy, in their house, there were four more children.

His mother Lylie, who was English by her origin, was working as a speech pathologist and trained disabled children, and his father Clement Serkis was a gynecologist of Armenian origin from Iraq. By rumor, for some time Andy's grandparents lived in the USSR. Originally the surname of his ancestors sounded as Sarkisyan, but after they moved to another country, they began to pronounce it in the English manner. While Andy stayed with his brothers and sisters in Great Britain, Clement often worked at the Middle East that’s why the future actor spent his vacations in Baghdad, Tyra, Damascus and other cities.

By rumor, Serkis began to have fancy for the creativity since early childhood. But at the beginning, the young man wanted to become a great expressionist as Francis Bacon that's why in his free time he was engaged in the painting and delighted his family members with bright, colorful pictures with the abstract images. Andy studied at Saint Benedict's school which is situated in the London Borough of Ealing. When Serkis received the school-leaving certificate, he continued his studies at Lancaster University where he comprehended the basics of acting.

Andy has chosen the dramatic arts as an optional subject to having a possibility to draw the posters for the forthcoming performances. Later the young man joined Nuffield studio where he was developing the plays. Serkis's interest in the theatre was only growing.

Further, Andy began to appear on the stage as an actor: he played the major role in the play Gotcha written by English playwright Barrie Keeffe. Andrew received the role of the emotional teenager who caught his teachers " on the date" in the little room. He took this opportunity and locked the couple down.

Since that the guy was in the superior position and he talked out all the offenses that he had to the captives. The guy enjoyed being in the role of the actor that’s why he changed his main subject for the dramatic arts. The young man diligently studied the works of Stanislavski and Brecht, striking his masters with his acting skills. Later, Serkis delighted the audience with the character from the well-known works: he appeared in the play Faust written by Johann Goethe, in Macbeth of William Shakespeare and many other plays by the masters of the classical literature.

In his filmography, Andy Serkis has more than seventy remarkable roles some of which have become cult for the admirers of cinematography. The actor who isn’t tall (Andy's growth is 173 cm) almost every year received the invitations from the eminent directors and took considerable steps in the movie industry wandering from one project to another. For his acting skills, Andy was more than once nominated for the prestigious Golden Globe, BAFTA, and Emmy Awards.

Andy Serkis began his creative career in the world of show business in far 1994. This was the adventure drama Prince of Jutland directed by Gabriel Axel. The young Hollywood stars Christian Bale and Kate Beckinsale received the leading roles. Before the actor performed in the movie The New Statesman (1987–1992) and appeared in this series in the episodic role. In 1995 Andy took part in the thriller The Near Room which plot is concentrated on the journalistic investigation.

In 2001 Andy caught lady luck for the tail: the actor appeared in the cult high-budget movie based on the novel The Lord of the Rings: Fellowship of the Ring written by John Tolkien. This movie gained world recognition and glory among movie critics and admirers. Moreover, Elijah Wood, Ian McKellen, Viggo Mortensen, Orlando Bloom, and other Hollywood stars entered the brilliant cast of this fantasy fighter. In this movie Serkis didn't appear in the shot, the audience only heard the voice and watched the movements of Andy. He played the cult character of the trilogy – lean and doe-eyed Gollum who was tremblingly protected "his treasure."

To create this fictionary personage, there was used Motion Capture technology – Serkis was dressed in a special suit equipped with the sensors, and his gestures were fixed with the help of the computer program and transformed to a 3D model. Though Andy wasn't present in this movie personally, it was a real challenge to transform into the mysterious Gollum. First, Smeagol has an intermittent speech and also a hoarse extravagant voice in which there are transferred the slightest emotions: whether it's desire, fear or hatred. Secondly, the character began to have a split personality, and thirdly, he has extraordinary plastic: Gollum is jumping and rollin’ all the time.

After the release of The Lord of the Rings: The Fellowship of the Ring the movie lovers began to think that Andy deserved Academic Awards, though the academy didn't decide to award the actor with it as by the opinion go the commission that role didn't correspond all the criteria of estimation. Moreover, Serkis appeared as the actor in the new part of the movie King Kong (2005) and in the fantastic movie Rise of the Planet of the Apes (2011) in which he played the monkey Caesar – the ringleader of monkeys' revolt.

It's noteworthy that because of the professional actions of the artists the director of the movie King Kong - Peter Jackson received the record fee of $20 million. In 2006 Andy was lucky again. The guy appeared in the sensational thriller The Prestige directed by Christopher Nolan. In this movie appeared the world-famous stars Hugh Jackman, Michael Caine, David Bowie, and Scarlett Johansson.

In a year Serkis took part in the gangster fighter Sugarhouse which tells about the destiny of two different characters: the ordinary clerk Tom, the crafty addict D, and criminal leader Hoodwink. In 2008 Andy got the leading role in the movie with the catchy name and with the age limit of 18 under the title - Sex & Drugs & Rock & Roll. In this movie, the actor performed the role of the founder of the punk movement - Ian Dury.

Further, the actor received the roles in the following movies - Death of a Superhero (2011), Wild Bill (2011), The Hobbit: An Unexpected Journey (2012), Avengers: Age of Ultron (2015) and other remarkable director's works. In 2015 Serkis again took part in the interesting project. It was a movie saga Star Wars: Episode VII - The Force Awakens which plot is developed thirty years later after the death of the powerful lord of darkness Darth Vader.

In real life, Andy Serkis is a cheerful person who got used to present his charming smile to the journalists, fans and close people. And his numerous photos on Instagram prove it. Moreover, the actor has a great sense of humor: at one of the American programmes Andy brilliantly got used into the character and read Donald Trump's Twitter imitating Gollum's voice.

It’s known that Serkis is considered to be an exemplary family man. In the summer of 2002, Andy got married to the actress Lorraine Ashbourne who gave birth to their three children - daughter Ruby and sons Sonny and Luis.

In 2017 the spectators saw the ninth movie of the franchise War for the Planet of the Apes. Except for Serkis, Woody Harrelson, Terry Notary, and Karin Konoval appeared in this movie. Andy confessed in one of the interviews that he would sound the character of Caesar in the Russian language with great pleasure (Danny De Vito practiced the same in the series The Lorax). Also, the actor took part in the movie Star Wars: Episode VIII - The Last Jedi which was released in 2017.

At present Serkis takes part in the shootings of in Black Panther (2018), Star Wars: Episode IX (2019). In 2018 there will be premiered Andy's director's debut - the drama Jungle Book: Origins. The cast is already approved, Benedict Cumberbatch, Cate Blanchett, Tom Hollander, and other movie stars will perform the roles. 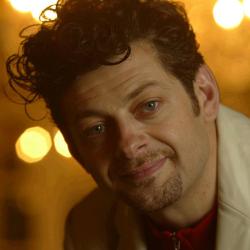