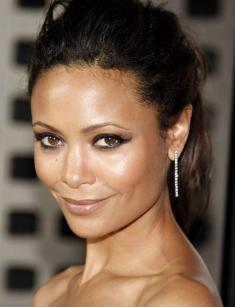 Thandie Newton is a British actress, in whose career an important place occupy the movies Flirting, Interview with the Vampire: The Vampire Chronicles, the series ER. The BAFTA winner for her role in the film Crash.

Melanie Thandiwe Newton is the full name of the actress. She was to be born in Zambia, where her parents worked. Her father is a British laboratory technician. Her mother is a health worker from Zimbabwe. But when Thandie decided that it was time to be born, the parents traveled to England, where they spent their holidays.

Thandie's childhood and early youth were spent in hot Africa. According to the artist, her mother, whose ancestry is associated with certain people, has the title of Princess. After her family moved to London, Thandie went to boarding school, where she took up ballet. The fragile girl dreamed of Swan Lake and the career of the prima ballerina.

She had to stop her career as a dancer after receiving a back injury. But the young ballerina turned into an actress with a wave of a "magic wand" in the hands of the Australian director John Duigan, which she never regretted.

Duigan was looking for the right girl to play the heroine of the drama Flirting. Dark-skinned Thandie Newton was the right choice because the girl had to play the daughter of an African teacher, who fell in love with a bully. The director also invited Nicole Kidman for the main role in the film. Flirting was released in 1991 and turned both actresses into rising stars.

The world of cinema fascinated and captivated Thandie Newton from the first moments. After graduating from high school, she went to Cambridge and continued to act in films.

In the first half of the 1990s, the actress played in the films Young Americans, Interview with the Vampire: The Vampire Chronicles and Loaded. The projects were highly appreciated by film critics and popular with the audience. The actress, whose height was 5,2 feet (160 cm) and weight was reached of 99-110 lbs (45-50 kg) at different times, produced an impression of a fragile figure and a charming smile.

Fame came to Thandie Newton in 1995. The 22-year-old actress played the main character of the drama Jefferson in Paris of James Ivory. The dark-skinned girl was entrusted with the image of the maid Sally, Thomas Jefferson`s mistress. This work brought Newton real success. For the first time in her cinematic biography, she was nominated for the main prize at the Cannes Festival.

She received a new gift of fate: another star role in the dramatic film Beloved after three years, where Newton met on the set with Oprah Winfrey. In the same successful 1998, the Italian film master Bernardo Bertolucci offered Thandie to play the main character in the film Sitiados.

After these projects, the Zambian star strengthened in Hollywood. The girl was offered only key roles where temperament and bright character are needed. But she was unlucky sometimes. For example, the blockbuster Mission: Impossible II, in which Newton played a key character, brought the actress a nomination for Golden Raspberry Award.

The star managed to rehabilitate four years later, when the drama Crash was released, which revealed the theme of racism. This work brought Thandie Newton the prizes of the BAFTA, the Screen Actors Guild Award.

The star could prove her status of the artist after the release of the film hits The Chronicles of Riddick, The Pursuit of Happyness and Norbit. In 2003, the actress received a significant role of the bride and wife of John Carter (Noah Wyle) in the popular TV project ER, where Anthony Edwards, George Clooney, Sherry Stringfield played the main characters. The film became one of the rating projects of the channel NBC and was broadcast for 15 seasons.

The actress played in the sports comedy Run Fatboy Run, the thriller RocknRolla of Guy Ritchie. The actress also appeared in the role of cameo in the British comedy How to Lose Friends & Alienate People, in which stars Kirsten Dunst and Simon Pegg and Megan Fox starred.

The biopic film W. should be noted as the brightest movies of Thandie, in which Thandie reincarnated in the first African American and the second woman as Secretary of state Condoleezza Rice. Another political project is the movie 2012. There is also a film created in the genre of horror film in the filmography of the actress. Thandie starred in the film Vanishing on 7th Street about a sudden Eclipse that leads to the loss of people.

Viewers and critics have long noticed the similarity of British actress Thandie Newton and the American film star Zoe Saldana, who starred in Hollywood movies Pirates of the Caribbean: The Curse of the Black Pearl, Guess Who, Avatar. Actresses are good to each other and even once made a friendly photo to please fans.

She has a successful, personal life. The actress is happy in the marriage to the British writer and producer Ol Parker. The couple raises two girls – Ripley and Nico and the son of Booker Jombe. There's a big age difference between Thandie's kids. Booker was born in 2014, ten years after the appearance of Nico and 14 after the birth of Ripley.

Thandie gave the name of the eldest daughter, impressed by the heroine Sigourney Weaver in the movie Alien. And the cult singer of the rock band The Velvet Underground the name Nico, which the actress's family likes.

Charity takes a huge place in the life of a Hollywood star. And the actress is sensitive to various trends in society. For example, Thandie was replaced by a prestige car BMW X5 for a more environmentally friendly Toyota Prius.

Thandie Newton is an actress, who regularly gets roles in projects of international scale. In 2016, the actress was cast in the series Westworld, where she received the role of Maeve Millay, the hostess of the house of tolerance in the amusement park of the future. The heroine of Thandie is not a man and a robot Android because the park was created to entertain people. Visitors have the right to do cruel things with robots and even kill them, after which the machine is sent to the factory, where all the functions are restored again but the memory is erased. Thandie Newton has an estimated net worth of $17.5 million.

Maeve becomes the robot that challenges the system, guessing everything. Millay arranges revolt in the park together with Dolores (Evan Rachel Wood). Anthony Hopkins, Ed Harris, James Marsden starred in the movie too. The film received high rating hits and prepares for the release of the second season.

The actress is not interested only in the world of cinema, Thandie participates in public actions. In 2017, the artist left her signature on the requirement of the company The Greenpeace on the creation of a protected area in Antarctica. The stars who spoke in support of the environmental campaign were Judi Dench and Javier Bardem, Vanessa Redgrave, Gillian Anderson, Carlos Bardem.

In the spring of 2018 starts running American comedy thriller Gringo, in which David Oyelowo played the main character, he makes his kidnapping and demands ransom from the name of the alleged kidnappers. Thandie Newton will play the heroine of Bonnie. Also, the actress will appear in many performers of the main characters of the space opera Solo: A Star Wars Story, which will be released in 2018.