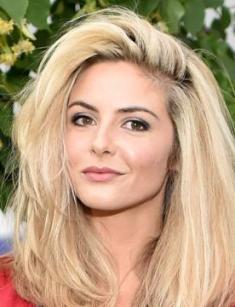 Tamsin Olivia Egerton is an English actress who rose to fame thanks to her roles in the movies and TV series St Trinian's, Camelot, and The Mists of Avalon.

The future TV star was born on November 26, 1988, in the south-east of England, the county of Hampshire. Tamsin Egerton has an older sister, Sophia Egerton, who also studied at the acting school in her youth. Egerton's mother, Nicky, raised the daughters alone. The girls attended Ditcham Park School. Tamsin did not like to study at school, and she regularly skipped classes. The girl began to shirk school more often when she was seriously interested in theater and took part in the performances of the youth theater.

At the age of 12, Tamsin performed the role of Mary in a Royal Shakespeare Company musical production of The Secret Garden. The girl’s acting was noticed by directors, and a year later, the young actress made her debut in the fantasy series The Mists of Avalon, which told about the reign of King Arthur. On the set, Tamsin was lucky to work with Julianna Margulies, Anjelica Huston, Joan Allen, and Edward Atterton.

In 2002, Egerton played in the historical miniseries Napoléon, based on the novel by Max Gallo. The project won an Emmy Award. The cast included such European and world stars as Christian Clavier, Gérard Depardieu, Isabella Rossellini, John Malkovich. The atmosphere of the filmmaking process fascinated the girl, and she made the final decision to become an actress.

Upon graduation from high school, Tamsin left her hometown and moved to London. The girl got a job as a nanny to rent an apartment and pay for acting classes. Then Tamsin also signed a contract with the Model Agency ICM Models and participated in photoshoots for fashion magazines.

At the age of 16, Tamsin made herself known, appearing in a feature film. She starred in the comedy Keeping Mum, along with Rowan Atkinson, Kristin Scott Thomas, Maggie Smith, and Patrick Swayze. The movie grossed $ 20 million at the worldwide box office.

A year later, she landed the next leading role in the drama Driving Lessons, in which actor Rupert Grint, famous for his work in the Harry Potter film series, became Tamsin’s partner on the set. Having played several bit parts, in 2007, the actress began to shoot in the project, which became her hallmark. The comedy parody St Trinian's brought Tamsin success, and her character Chelsea Parker became popular with the younger generation of moviegoers.

In 2009, the continuation of the movie, St Trinian's 2: The Legend of Fritton's Gold, was released. On the set, Tamsin made friends with another young actress who played the title character, Talulah Riley. The girls even lived together in a rented apartment.

While playing in comedies and TV shows, Tamsin also portrayed Flora in the horror film Knife Edge. In 2010, the miniseries Money and the thriller 4.3.2.1., featuring Egerton, were released.

The actress also starred in the successful drama-comedy Chalet Girl, in which Tamsin's heroine had to compete for the heart of a handsome man with Felicity Jones’s character. Ed Westwick, Brooke Shields, Bill Nye also played in the movie.

While building her career, Tamsin did not miss the chance to appear as Guinevere, the wife of knight Leontes, in the fairy tale series Camelot about the great deeds of King Arthur. Joseph Fiennes, Eva Green, and Jamie Campbell Bower also joined the main cast of the TV show, which aired in 2011.

Every year, the actress's filmography has included new projects that reveal Tamsin's unique talents. One of the significant roles was the character in the 2014 romantic melodrama Love, Rosie, shot by German director Christian Ditter. The movie premiered at the Rome and Philadelphia Film Festivals.

Tamsin's attractive appearance (the actress weighs only 123.45 lbs. (56 kg) with a height of 5.87ft. (179 cm)), a charming smile and expressive brown eyes allow her to look spectacular, playing any role, be it a historical heroine or beautiful modern lady.

Workout and diet help the actress to obtain a slender figure, and the woman goes in for sports every day.

During her career, Tamsin has repeatedly changed her hair. In the beginning, the girl had long dark hair, and then she dyed it blond, which worked for the actress.

Tamsin cares for her appearance in front of the camera because her hairstyle and makeup are always impeccable. As for clothing, the actress prefers romantic or sporty styles. In 2016, Tamsin had a short haircut and did a low knot bun, which people could see in her latest photos.

Young Tamsin had a lot of love affairs, and there was much discussion of her relationships. It is known that at the beginning of an acting career, Tamsin dated producer Jamie Hendry.

Later, the young woman began to appear together with the famous football player, Andy Jones. In the early 2010s, the beautiful lady was credited with a love affair with the English movie star, Ben Barnes, with whom Tamsin participated in one photoshoot.

Since 2012, her boyfriend has been actor Josh Hartnett, who is ten years older than Tamsin. The young people have not got married. But Tamsin and Josh are not going to separate; moreover, the actress and her partner had a child at the end of 2015. On the official Twitter page, the happy mother regularly posts photos with her daughter.

In 2016, the actress played in the English comedy action movie Grimsby, which grossed $ 25 million. And this is no by accident because the outstanding cast, featuring Sacha Baron Cohen, Penélope Cruz, and Mark Strong, as well as exciting plot twists, made the movie top-grossing.

In early 2017, Josh and Tamsin announced the actress’s pregnancy, which became pleasant news for fans. So, they need only to celebrate the wedding.

In August 2017, Tamsin Egerton became a mother for the second time. The woman and her common-law husband, Josh Hartnett, had their second child. The celebrity parents keep the baby’s birth under their hat, not saying either the name or gender of the kid.

Tamsin Egerton has an estimated net worth of $275 million.