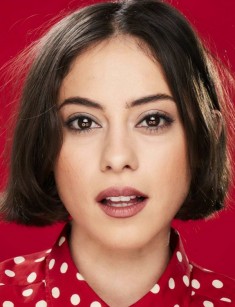 Rosa Bianca Salazar has starred in dozens of famous films and continues to conquer the American film industry. The talented woman plays both leading and minor roles and is the favorite actress of millions of fans.

Rosa Salazar was born in Washington, D.C. on July 16, 1985. She spent her childhood with her family in Greenbelt. The girl remembers that she was an active and creative child.

It is known that at the age of 15, Salazar worked in the entertainment industry and dreamed of becoming an actress. The celebrity admitted in an interview that there was a difficult period in her life when she even had to live on the street. Rosa’s primary goal was to purchase her own house. In 2009, the family moved to New York City.

The young actress began her career when she moved to New York City and collaborated with the American comic site CollegeHumor. Rosa appeared in a few short videos, simultaneously attended acting classes, and then moved to Los Angeles.

Salazar got the first significant role in the series American Horror Story. The first season premiered in December 2011 on the FX channel. Rosa played on the same set with Connie Britton, Evan Peters, Jessica Lange, and other celebrities.

The actress got the secondary role of the ghost nurse, Maria, who brought Rosa some fame because the series was highly rated and later was nominated for the Golden Globe (Best TV Series – Drama) and Emmy Awards.

At the same time, the actress played another role in the series Parenthood. The family drama created by Ron Howard premiered in 2010, and the story unfolds around three generations of the Braverman clan.

Rosa Salazar played a bit part again, but it was another step into the world of the American film industry. The tiny beautiful lady with a height of 163 cm and a weight of 50 kg attracted the attention of thousands of fans. Rosa looked great on the screen and played even the most insignificant role brilliantly.

2012 and 2013 were marked by the roles in the series Ben and Kate and Body of Proof. Besides, she voiced heroes in the cartoon Epic, which was released in 2013, and the game Batman: Arkham Origins.

In 2014, Trevor White’s drama Jamesy Boy and the film Search Party by Scot Armstrong were shot. However, Rosa Salazar played the roles that made her world-famous only in 2015. The celebrity portrayed Lynn in the famous dystopia The Divergent Series: Insurgent. Robert Schwentke was the director of the film, based on the book by Veronica Roth.

Rosa Salazar radically changed her appearance for her role in the dystopian film. In the story, the young woman was supposed to shave her head all over. However, the actress recalls that she asked them to leave the part of her hair and dyed her Mohawk from black to white.

Salazar played the following significant role in the film Maze Runner: The Scorch Trials. The actress appeared as Brenda (she saved Thomas (Dylan O'Brien)) in 2018 when the fourth part Maze Runner: The Death Cure was released.

2016 was no less fruitful for Salazar. She participated in the thriller Submerged and the series Man Seeking Woman. The following year, the actress collaborated with Dax Shepard, starring in the film CHiPs with Michael Peña, Adam Brody and Kristen Bell. At the same time, Rosa voiced a hero in the animated series Big Mouth, and also released her short film Good Crazy.

Rosa Salazar prefers not to tell about her personal life. At the beginning of her career, the actress had a romantic relationship with Isaac Hillerg.

It is known that Salazar adores Adam Pally and even calls him her “working husband." The actors met on the set and immediately got on swimmingly. Despite the warm relationship, Adam and Rosa are just friends. The actor is married and has two children, son Cole and daughter Georgia Grace.

In 2018, viewers have waited for the premiere of Susanne Bier’s film adaptation of Bird Box based on the novel by Josh Malerman and the film Alita: Battle Angel with Rosa Salazar.

The cast of Bird Box is impressive. Sandra Bullock, John Malkovich, and Sarah Paulson starred in the film.

However, they wait for the release of the film Alita: Battle Angel directed by Robert Rodriguez no less anxiously. Rosa Salazar will play the leading part of a cyborg. Bella Thorne, Zendaya and Maika Monroe also auditioned for the role. However, the director said that the acting of the Divergent star impressed him very much. In the winter of 2018, it will be clear whether viewers and critics appreciate the film or not. 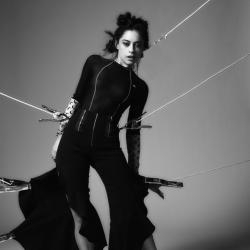